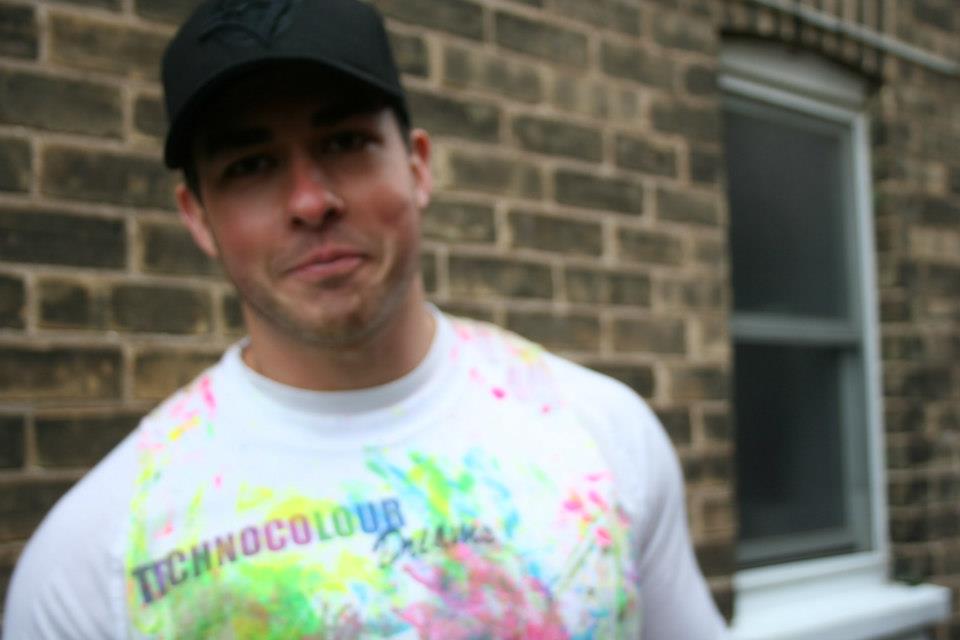 This may sound like an odd request, but that’s exactly what Dom Sabourin loves to hear.

It shows him, the creator of the experience, that patrons are having fun to an extent unimaginable to those who have never experienced it.

“Technocolour Dreams was thee best experience of my life,” said Lisa De Jong, who attended a rendition of the event in St. Catharines, Ont. “It was completely ridiculous.”

What is Technocolour Dreams you may be asking?

“Plain and simple, it’s a paint party,” said Sabourin, 27, who grew up in Brantford, Ont.

Sabourin smiled and summed it up nicely: “Paint ends up everywhere.”

Under the black lights, the paint glows, creating fabulous fluorescent spectacles all over the dance-floor.

The paint is supposed to be washable, but as guests have found out, it doesn’t come out very easily. Regardless, the crowds love it. “It’s seriously the craziest party I’ve ever been to,” said model, Nicole Arbour. “And that includes Cancun, Spring Break, MuchMusic Video Awards, everything.”

The increased attendance appears to be worth the mess. Club NV in Brantford has held three of these events; the last taking place this past April where the crowd was notably ecstatic.

The name “Technocolour Dreams” comes from wanting to include the type of music (“Techno”), the paint aspect (“colour”) and finally, because as Sabourin says, “We want the atmosphere to be fantasy-like, where people can show up in the most creative costumes and escape reality” (“Dreams”).

Founded in 2012 with partner Yvonne Arbour, the mission of Technocolour Dreams is to deliver the best and most unique party experience to its guests.

“The idea came to me when I first experienced a version of a paint party in Panama City (Florida),” Sabourin said. “I was blown away. It was like being a kid again.

“And I thought how cool it would be to bring back to Canada.

“The only thing we use is the concept of paint, which can’t be trademarked,” he explained. “The name and everything else are original.”

So, Sabourin continued, “When I got back to Canada, I decided to make something happen. The owner of Club NV gave me the time of day to discuss my plans.”

Sabourin, a Winnipeg native, graduated from Business-Marketing in 2012 at Mohawk College (Hamilton, Ont.), where he gained his entrepreneurial edge. He had already infiltrated the bar scene, working as a bartender at Boston Pizza in West Brant since 2009, and these credentials made the transition to initiating Technocolour Dreams a big step, but not an impossible one.

“I decided to take marketing at school because I love watching something I create grow,” said the Brantford Collegiate Institute graduate. “I like to picture an end product and figure out how to get there.

“I knew trying to sell a paint party to kids that have never heard of it would be a difficult,” he explained. “So I took my knowledge from Marketing, and called Dunbar from MTV’s ‘Real World’ who I met in Florida to see if he’d host it,” said a determined Sabourin. “This gave me a selling edge.”

The first ever paint party was at Club NV on September 15th, 2012. Admission was reasonable compared to the amount of cover for a typical night. Proceeding this event, its popularity became contagious and soon thereafter, clubs across Ontario were all but lined up to have their own versions of the party.

“Our first party didn’t sell out, but the goal was just to make sure people left wanting more,” he assures. “Needless to say, it was a success and from there we had to plan the next one.”

The next one, thrown just a month after the first, was a risk, yet attendance numbers doubled. “From there,” he explained, “we knew we had lightning in a bottle and were on to something.”

Sabourin and his “Dream Team” have also been to St. Catharines, Hamilton, Toronto and Barrie in the past few months with plans to hit more cities across Ontario.

“It’s been a crazy summer. I have several cities (bars) lined up for meetings to plan events.” He has also already reached out to Montreal, with no plan to limit the parameters of Technocolour Dreams. Sabourin even posted on his Facebook that someone in Africa has reported interest in hosting a party!

“Everyone I’ve talked to says this is my calling,” the entrepreneur said. “For me, the feedback from the fans is the priceless reward.”

Sabourin may want to buy stock in paint because the fans have spoken. You can hear them in the background, faintly at first, but reassuringly, louder and louder, eventually screaming over the music, “WE WANT PAINT!”

The revolution, in flying fluorescent colours, is on.