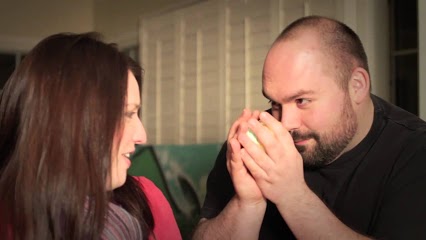 Recently, I was given some insight while waiting on an important e-mail and checking my inbox every six minutes until it finally came. I thought to myself, ‘Is this what a 5 year old feels as Christmas approaches? Is this what it is like to be 12 and waiting in the long line at Dairee Delight on a really hot August afternoon? Or maybe this is what it feels like for a young college student waiting to see if the person he or she asked out on a date replies to them on Facebook?’

That last thought brought me back. To be honest, the last time I felt like this I wasn’t awaiting the results of the 2011 election, or to see if something I wrote for a journal was accepted for print, or while waiting to hear if our pitch for Advocate Television would get the green light.

The last time I felt like this was when I was courting Bekah – now my fiancee and soon to be wife. Alright kids, let’s explain what courting is and please don’t use the Urban Dictionary definition. In fact, don’t even look that one up. Instead use this:

Courtship. (/ˈkôrtˌSHip/). Noun. A period during which a couple develop a romantic relationship.

It’s kind of an old fashioned concept but for us it was amazing. Bek and I had known each other for years before we were dating through family friends, but were always those people at the get-togethers who would say hi yet never really had a reason to talk too much beyond that.

At one get-together we started to talk and probably talked for an hour straight. A little later some folks suggested to me that she and I attend a wedding together that we were both already going to, but the timing never worked to ask. However, we both ended up involved in that wedding in different ways. She was a bridesmaid. And I was the videographer as a gift to the couple.

We had more reason to connect now. And soon at every get-together we developed a bit of a “Bekah and Marc Bubble” as my one friend put it. We’d be at a party, for example, but spend hours just chatting with each other. Soon my other friends started to notice. I started to notice something too – Bekah started showing up at a lot more get-togethers I would be at.

Could it be she was interested in me? Nah, it couldn’t be that. She was just being friendly, right?  Our mutual contacts seemed to think we liked each other and sneakily (and wonderfully) started talking up her to me and me to her.

When your friends and loved ones want you to start dating someone they are not shy to tell you all the positives about them, and both of us have some pretty good friends and loved ones. We had both been through some pretty bad breakups (who hasn’t?), and it is really reassuring when getting into a potentially serious relationship to have people who know you both vouching for the other.

Even my mom who hadn’t met her already liked her. My mom and I were hanging out one day and I was showing her footage from the wedding I had shot. One of the clips was of Bek and I talking. Immediately my mom said, “She seems really nice and she likes you, Marc.” Cue me blushing and downplaying the whole thing.

After the wedding we talked about hanging out but never did. Actually, to be more accurate Bekah said, “We should hang out sometime this summer now that the wedding is over” and I mistakenly thought she meant our whole group of friends, not just she and I. I told her, “yeah, it would be great if all of us could find the time to hang out…as a group…a big group.” I might as well have added “and never date” to the end of that sentence.

Truth be told I was afraid to hang out with Bekah that summer. In late August of that year I was moving to Thunder Bay to finish my masters degree. I liked this girl bad, but I didn’t want to start something then have to leave and either break up or get into a long-distance relationship that I was sure wouldn’t work.

What to do?  What to do?! Enter Facebook stage left. Over the course of us both finishing our last year of University – Bekah in Guelph and me in Thunder Bay –  we sent each other 219 Facebook messages. Most of these were not one line notes. Instead, they were long chapters in a book we’d eventually call our marriage – but we didn’t know that at the time. We’d have these long Facebook chats from different sides of the province while taking study breaks in our campus libraries. Once I even worked up the nerve to send her snail mail (swoon). Yet we didn’t even exchange phone numbers.

Back to the beginning of this column – the part about the anxiety of waiting for something potentially wonderful yet not being sure if it will happen. I was moving back to Brantford on March 28th, the day of my 28th birthday. Every time I had visited home, Bek made some effort to be at a get-together I would be at. My best friend is related to her so he kept her in the loop.  But this time I was home there would be a big party.

A Facebook event page was set up, but she never RSVPd and I was crestfallen. Oh well, maybe it was all some sort of social media mirage. Maybe we were just friends killing time on study breaks and the flirty undertones in our communications were imagined on my end.

Then she showed up as a surprise mid way through the party!

I immediately proceeded to spend most of my night chatting with her and VERY clumsily flirting. I mean really silly stuff like throwing pepper and salt on her, showing her my “impressive” (i.e. not impressive) dance moves like the toll booth, asking her if she wanted to come into my mom’s house for a juice box while impersonating Steve Irwin. In my defence, I was only back in Brantford for 2 days and didn’t have my own place yet and she was driving so I couldn’t offer her an adult beverage. I have no excuse for the Irwin impression. It is a lot harder to flirt with someone in real life at a social event with lots of people around you than it is on Facebook with time to think through everything you are saying.

It all somehow worked out though and we will be getting married in the spring. The overall lesson, however, is this: anxiety does bad things, but if you can power through sometimes things work out in sublime and surprising ways.

We live together now so we don’t send each other a plethora of long Facebook messages anymore. Instead we talk and go on long hikes together. It’s a lot better than the uncomfortable library cubicles of our courtship. That said, I’m so happy we both spent our study breaks together back then, even if we were 1432 kilometres apart.