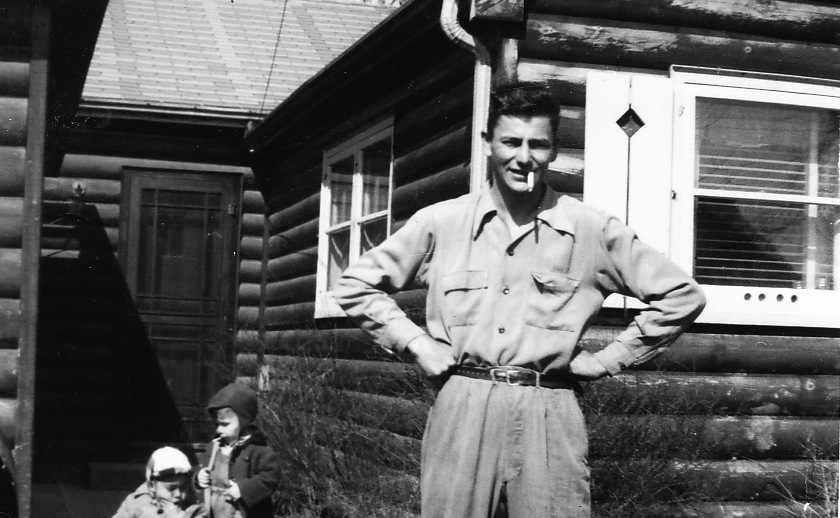 Arthur Donald Anderson was born May 17th, 1925 on the Six Nations of the Grand. His mother died of tuberculosis when he was just a young boy and he never got to meet his father. His grandparents raised him as their own.  His sister said they spoiled him because he had no parents, and he would prove this over and over again by getting into mischief that he never got into trouble for. I know that must have been true from stories he shared about putting syrup into his piano teacher’s hair and driving a thing called an auto-tractor when he was only 10 years old.

My dad’s memory seems to be failing him. He knows it and it frustrates him. I hate seeing him struggle with trying to remember his pin code for his bank card, whether he locked the door and if he ate that day. He seems to be able to remember things that ‘happened 50 years ago better than 50 minutes ago. I thought it would be nice for him if we could sit and talk about things he had clear memories of. Each weekend, I would take my dad to dinner and ask him a question that would begin stories of him growing up on the reserve. He told me what his first job was and about the day he kept war prisoners from running away from a farm he was working on by acting like a wild man. He told me sometimes the Grand River froze over so thick that he would drive a car on it. I said, “Wow weren’t you afraid that your car would fall through?” He said “Naw, I never drove my own car on it!”

I remember the very first question I asked him. “What was your first car dad?”  He was so excited to share the story with me. He was only 15 years old and his older brother Elwood sold him a ‘29 Pontiac. Because he was only 15, Elwood told him he had to promise not to drive off the reserve. The next day, dad said he was driving down the QEW at top speed. He was driving so fast that the steering wheel was shimming and he was angry, thinking his brother sold him a lemon. We both laughed as I described my vision of him as a little boy driving down the QEW barely able to see over the steering wheel.

The one story that I had heard variations of over the years was the one I wanted to hear from my dad.  So I asked, “Dad, do you remember the first time you saw mom?”  This was a story that he knew well as he smiled, closed his eyes and nodded. “I was riding around in my car with my brother-in-law, Jack.  We ended up in Caledonia and parked on the side of the street. We were just talking and I was relaxing with my feet up on the dashboard. All of a sudden the coach bus from Hamilton pulled up.  There were people getting out and then all of a sudden this girl got off. My feet hit the floor and I said “Wow, who is that?” Jack said, “That’s Tommy Bomberry’s sister.”  A few weeks later I was at the Simcoe Fair, and I saw my brother Elwood and his girlfriend Geraldine sitting in a car. There were 3 girls sitting in the back so I went over and asked Elwood who they were. He told me that they were Geraldine’s cousins, Tommy Bomberry’s sisters, Kathleen, Florence and Laurene. That’s when I saw that it was the girl that I had seen getting off the bus. I asked Laurene to go on the Ferris wheel with me and she said “yes.” The next day I asked her to go to the movies and that was the beginning of the romance.”

When my dad shares his stories, I see him as a little boy and a silly teenager, like a character in a book.  He still has his sense of humour and I know I’ve only gotten to hear a few of the hundreds of stories he has to tell. He really misses my mom who passed away in January 2007.  The two of them had been through a lot of challenges in their life together. My dad has wondered many times what his life would have been like if he had known his father. I tell him that he would have never seen that beautiful girl get off the bus from Hamilton, he would have never met and married her, and none of us kids would have been born. I tell him that life has twists and turns that we can’t always control. We don’t have the choice of who we are born to if it’s First Nations, Scottish, Irish, Italian or any other race. We don’t get to or shouldn’t get to choose when we die. The only thing we have control over is how we live our lives between these two events.

There is only one small nursing home on Six Nations. I think it’s because our culture has taught us to honour, love and respect our elders. We keep them close to us for as long as we can. There is still a lot of wisdom to be received from my dad. I will make sure he doesn’t need to know his pin number, I will double check the doors for him and I will always make sure he’s eaten. I will celebrate with him the stories of his youth and teach by example to my children that this is how we treat our elders. Gpa, as they affectionately refer to him, has been a part of their lives since the day they were born. And like their grandmother, he will continue to contribute joy and laughter to their lives until the day he joins that beautiful girl that stepped off that bus.

One Reply to “A Story of My Dad – by Lorrie Gallant”