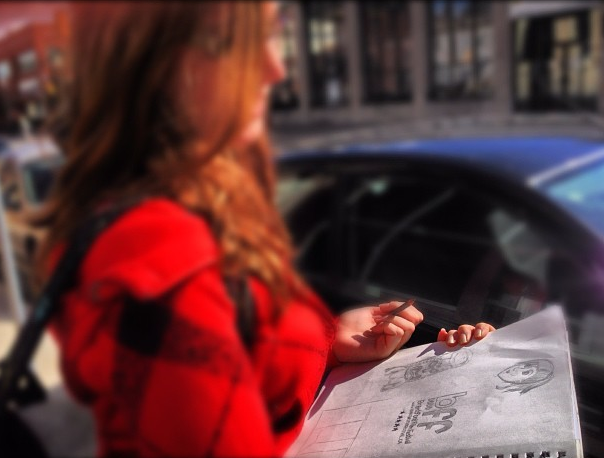 It’s different here. The walls are vibrant, filled with “Roommate Wanted” signs, advertisements for various events, as well as local ads. It feels like a maze with all these staircases, hallways, and doors, ones that could lead anywhere. It’s probably best to find a route around here first so I won’t get lost, because after all, this is a weird place that I don’t know. It seems like I’m so far away from home, but I’m not; this is my home. This is my university.

This is the difficulty of being a Laurier Brantford student. The minute I step onto the university grounds in Waterloo, usually for a fleeting event, it feels like I’ve been transported to a different planet. It’s not just the scenery that’s changed; it’s the entire atmosphere of a more “typical” university campus. It’s larger, with more to offer, and even more to see.

Though I know this is my university too, it never quite fits. I know that I’m a Cinderella here. At midnight my time will run out, and I’ll return to the life I’m used to back in Brantford. A yellow school bus is my pumpkin, and the fantasy of living here will run out. So I soak in as much as I can, because I know it’ll all be over soon.

I’m here for the homecoming game, one of the only times I ever come here. I came prepared so I don’t draw any attention to myself, and feel even more like an outsider. I wear purple and gold like the rest of the campus so I blend into the crowd easily. No one can tell by looking at me that I don’t actually attend school here. It’s an invisible inferiority I feel, knowing that this isn’t my campus.

I have been lucky over the years that I can fake my way around. My sister was here for her undergrad and after visiting her during that time I learned my way around. This also proved to be incredibly useful because I know the language of this campus, both verbal and nonverbal. I know what The Terrace is, and that the hawk outside Wilf’s, the campus pub, is sacred and should never be stepped on, no matter what.

So in this way, I’m probably the best person to explain this unnerving feeling to you, since I’m not a completely lost Brantford student, but I’m also not a native of this campus. It’s the worst feeling when someone asks you what program you’re in only to have to further explain that the reason they’ve never heard of Journalism is because it’s only offered in Brantford. This usually leads to the next question of where Brantford actually is. I’m now able to quickly respond, with the explanation, it’s in close proximity to Hamilton. But there is a certain look in people’s eyes when they hear that I’m from “that other campus.”

It’s not to say that our Waterloo counterparts think of themselves as superior to us, but for most of them they simply don’t know anything about us. And why would they? Even though our campuses are connected in many ways, in just as many they are separated. First, we call ourselves Laurier Brantford, which automatically labels us as different. Why not just call us Wilfrid Laurier University like they do in Waterloo? Also, it feels like the only times we ever see any sense of community is at homecoming. While this is all well and good, having a sense of being united doesn’t do us any good when it only happens once a year. Yes, we are represented in the Student Union, but our voice isn’t likely to be heard over those that represent Waterloo’s wants and needs. We are the same university, so shouldn’t we be seen as the equals?

But we aren’t, so we continue to carry around this hidden feeling of being an outsider every time we visit Waterloo. Well, that plus an enormous amount of campus envy. Personally, the library alone makes me incredibly jealous. A friend of mine commented to me at homecoming that it’s not just the campus she’s jealous of. For her, it’s the off campus atmosphere that she longs for. The streets and streets of just students having parties bring out the quintessential movie university experience we all grew up watching. Of course it’s hard to compare the student situation because Waterloo simply has more students than Brantford does.

That same friend pointed out something else to me that I had never really thought about before. She mentioned how we’ve become so accustom to having to wake up early and take a bus for an hour to attend our own homecoming where at most other schools, students simply leave their houses and walk to campus, no long trips required. Though I am glad that they do bring us there, otherwise this divide between the campuses would feel even more extreme.

But regardless of the efforts, this divide is still present. Sure, our school has been around since 1911, but the Brantford campus is still new. It’s been thirteen years since our campus’ doors opened and it’s grown at an amazing rate. So maybe that’s a part of my campus inferiority complex, I’m comparing apples and oranges. Is it really fair to compare campuses that have an 88-year difference? Waterloo has had an obvious head start. Who knows what Brantford will look like ten, twenty or even fifty years down the line?