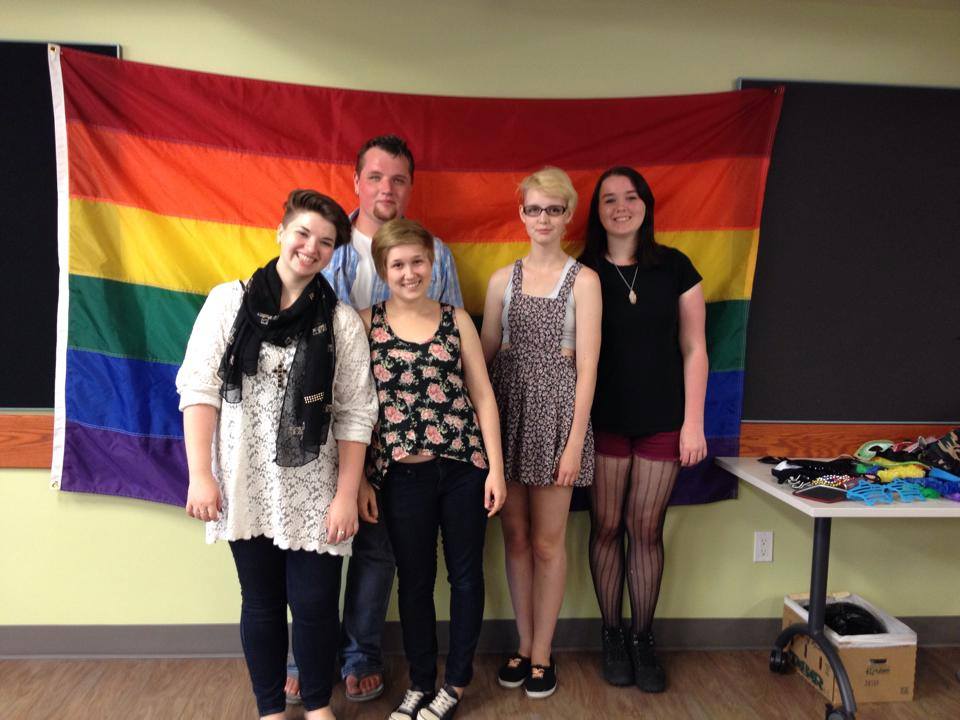 After months of organization, Brantford Youth Pride held its first ever Coffee House for lesbian, gay, bisexual, trans* and queer (LGBTQ) youth and allies aged 13-21 on Friday, June 13th at the Grand River Community Health Centre on Colborne Street. The night, planned by youth for youth, was illuminated by a full moon and was complete with local performers, poetry, food and crafts. The turnout was astonishing, as Brantford’s youth formed a kind, warm atmosphere much needed within Brantford’s LGBTQ community. These events are vital for our community, as according to Rainbow Health Ontario, the suicide risk for youth within the LGBTQ community is nearly fourteen times higher than that of their heterosexual peers, and there’s an increased risk of substance abuse, isolation and abuse at home, school and within society. A positive community, like the one formed on Friday, is associated with decreased depression, suicidal urges and substance abuse. This atmosphere promoted acceptance and respect while creating an overall loving environment, assisting us all in feeling the love we deserve.

A close-knit community formed within the three hours of the Coffee House where we listened to several local teenage performers; including an acoustic set from Matt Campbell, while making crafts and taking pictures together in a photobooth. We talked as though we knew each other for years, and couples freely showed their affection for one another without judgement. One girl went up on stage and read a heartfelt poem declaring her love for her girlfriend, irking tears from the audience, and one guy went on stage and freely spoke about his struggles of poverty, addiction and spoke about suicide. One of his lines spoke about how most of us make it through our struggles, with scars to show for it. That very moment, the darkest moment of the entire night, marked when we all realized that we have made it, and we are together, all happy, all alive and will continue to make it because there are so many people on our side. His profound speech made the entire room silent, but for all of the right reasons. It was a reminder that everything was going to be okay, and all of that isolation some of us used to feel was gone for now. He declared that these events are what we all need because it’s difficult reaching out within Brantford, as there are limited LGBTQ friendly places for youth. Some schools may have Gay Straight Alliances, where friendships and families are made, but some youth who do not regularly attend schools, are uncomfortable attending due to fear, or who attend schools without Gay Straight Alliances never have a chance to meet youth like them who share their struggles, increasing depression and angst. Spoken Word Poet, Andrea Gibson wrote, “The Nutritionist” as a response to suicides among these youths, and spoke about why it is important for us all to realize we are never alone.

What I know about living is the pain is never just ours
Every time I hurt I know the wound is an echo
So I keep a listening to the moment the grief becomes a window
When I can see what I couldn’t see before,
through the glass of my most battered dream, I watched a dandelion lose its mind in the wind
and when it did, it scattered a thousand seeds.

if the only thing we have to gain in staying is each other,

As a youth within this community, I know the struggles of coming out, the fears of rejection, wondering who would ever still love you, and having to cope with so much fear, pain and the weight of your identity on your shoulders. But these events encourage youth to get out into the community to find others with similar identities, and assist with building confidence in who they are, while lessening the anxiety and fears of embracing who they are. The night was filled with prizes, buttons and fun. We all left happy, full of homemade baked goods and pizza and with so many new friends. The turnout of about twenty people on a summer night showed that there are so many of us in Brantford going through similar things. None of us are ever alone; we just need to branch out and leave our comfort zones once and awhile.