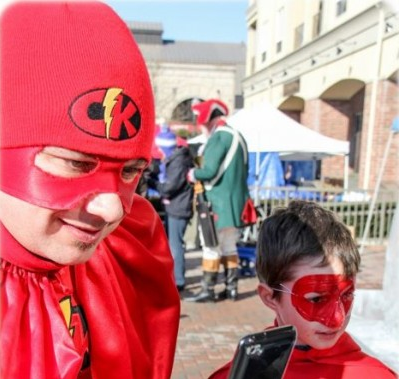 I went through a long period of life not liking myself very much. I was the fatish kid. Not the grotesquely obese, sweat through my t-shirt on the walk to school kid, but the kid who had man boobs so hated being “skins” in gym class kid. And poking fun at yourself is easier than hearing others poking fun at you. In the long run, it doesn’t hurt any less–you can just control it. As an act of desperate rebellion (ironically) I decided the best course of action was anorexia, good grades and being straight-laced. I figured I’d already tried man boobs, and overall lifestyle boobery. So, for about a year of life I ate ice cubes for dinner, did my homework and played nice with others. From my ninth grade student card photo, to my tenth grade student card photo, you’ll see over a hundred pound difference.

If you’ve seen my double chin lately, you’ll know that I’ve recovered. I was at my friend’s house one night, and had just finished watching an episode of Cheers when his mom asked me if I wanted a brownie. I said that I’d prefer a glass of ice. She placed herself between me and her fridge, and said firmly, “Dave. Eat this.” I ate a brownie and haven’t stopped since. In fact I had three before Seinfeld came on at 9:30! Just like that I was good ‘ole Dave again. I decided pretty quickly that I kinda liked the old Dave better anyway. He ate more, and laughed a lot. The problem was that Dave version 3.0 had let himself get far more jaded than I had ever expected to be, and I liked myself even less than ever. 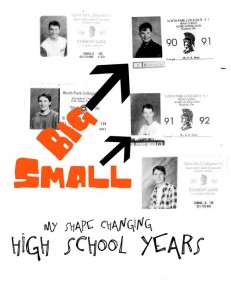 My “comedy” took a very focused, intentional, ugly turn. Instead of doing my homework at night I’d spend my time strategically analyzing people’s personalities, and identifying their areas of personal vulnerability. Wherever they were hypocritical and full of crap, I’d prepare material for class the next day with the sole intention of attacking that weakness with a mean spirited, verbal, comedic barrage that they’d have no answer to. I’m talking “Grade A” material too. I was GOOD at this. I still am if I choose to be. I’d go hard, strong and public until I achieved my goal… tears. I used to be very proud that I could reduce even the heartiest soul to tears should I choose to. Especially Christians. They were the easiest, because I had insider information. I knew what they were supposed to be, and I knew what they actually were. The secret was to have so many other people laughing with me that my point would win the public perception game.

But I broke, because man can’t keep a game like this up for long. There is too much good inside of people. One day I found myself crying in history class during my sixth year of high school. This was not something that I made regular practice of. A girl, who I recognized from my brother’s church youth group, turned around and saw me in my sorry state. She was wearing blue sweatpants and a big woolly sweater. She looked at me with a pregnant pause, as if deciding whether or not to jump off a tall cliff into rough waters or not. Then she said asked me something that I didn’t recall anyone ever asking me. She mouthed the words, “do you wanna talk?” I had no good reason to say yes, but I did. Because I did need to talk.

So I talked for nearly a month with this very patient girl–who seemingly had a new wool sweater every day. She let me spew out every sort of venomous thought that rolled through my mind (and a few extras just to see how she’d react). It was messy, but she didn’t stop letting me talk. It was weird quite frankly. Christian AND Cute AND Normal? We had gone to school together for five years, and had never noticed each other. We were from very different social circles, and had very little in common, but different something was up.

One day the talking stopped. Miss Woolly Sweaters decided that enough was enough. She saw Mr. Omnipotent in the room just as clearly as I did, and He was asking her some serious questions too. After listening to my venom for about ten minutes over the phone one night she said, “Dave it’s time for you to choose. Are you going to let God help free you, or not? There’s nothing more I can do.” So, this was how it was going to be. And she was right. I wanted her, but I wanted Him more. Two weeks later, I said yes to Mr. Omnipotent. He smiled and hugged me back. Miss Woolly Sweaters was sitting right beside me crying unrestricted tears along with me. Without having to say a word, we knew that we were “together” forever. We went home that night with red puffy eyes, and each other’s snot on our shoulders. Three years later we stood at the altar. Fifteen years later we have three kids.

Today, many people know me as Captain Kindness. It’s privately a terrific irony to me, but more than that, it’s a transformational testimony that points to the fact that no man is beyond redemption in God’s eyes. Most of our negative actions and thoughts often, simply as a result of us not seeing ourselves how God sees us, manifest in lots of different ways, and often hurt more than ourselves. But it’s base is something inside us. We all have things that lurk in the recesses of our souls. Think you’re the only one? Please. Get over yourself. We ALL have them. Today I encourage you to find someone who will stand with you, bring it into the light, and allow it to heal. It’s a life-changer. Trust me.