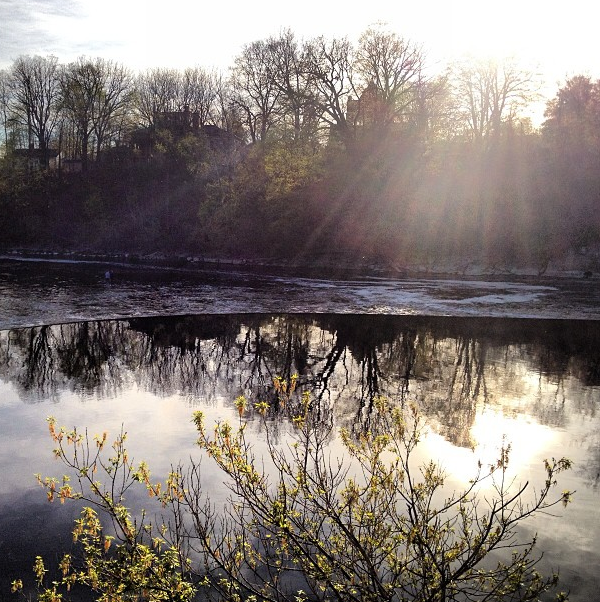 I was speaking with Mary Lou Knechtel back in the spring and she reminded me of our water challenge in the northwest part of Brantford near the Northwest walking bridge. As our city inevitably grows, land is needed for building new homes and businesses. One area prime for development is in the northwest, along Hardy Road. Three projects, totaling over 1,000 new homes, are planned by developers and await the outcome of Ontario Municipal Board hearings before ground gets moved and building begins.

Lou is involved with a group called The Hardy Road Area Citizens Committee (THRACC) and asked me if I’d put up a lawn sign that reads:
“NO DEVELOPMENT IN THE HARDY ROAD AREA! PROTECT OUR SOURCE WATERAND ENVIRONMENT. VISIT www.thracc.com”

Despite thinking that no development was unreasonable, I do think we have to protect our source water so I said Of course!.

The sign sat beside the garage for a couple of weeks before my wife told me that she had seen the same sign at a friend’s house on Tollgate and ours went up that afternoon. About three weeks later, a neighbor four doors down knocked on the door asking where he could get one too.

“I don’t get involved in politics but this is important,” he told me. A lifelong resident of Brantford, Graham uses the trails with his young family. When I asked him what made it important, he said that, to him, water quality was one aspect of a healthy community. In Brantford’s case, we draw water from the Grand River at Wilkes Dam. It is treated in a world-class facility before coming out our taps. When it goes down the drain in our homes, it goes to another city facility before being returned to the Grand where it makes it way down river to Lake Erie. Graham’s family also uses a Reverse Osmosis system to further clean their water. While recognizing that development has to happen, he talked about how cities have grown so far and the lessons we should have learned. Planners should have a better idea today than 20–30 years ago, of the impact of altering an ecosystem that helps filter water. Altering it, seems to him, was a step backwards. He mentioned talking to his oldest son, now 7, about knowing what things you can change, changing what you can and where you can help. We chatted a few more minutes before he left me with the parting thought that the government should own land that has a significant impact on its community.

Does this area have significant impact on its community? The area is home to lots of wildlife as well as various endangered plant and animal species. There is also a cold water spawning creek for trout, natural water spouts and a perched fen. It turns out that the Prairie Fen here is the only example of its kind in Ontario. Perched Fens, or hillside wetlands, are made up of wet prairie sedges, grasses and shrubs which helps to create an ecosystem all its own. I’m told there is a 13,000-year-old limestone formation called a tufa mound there too. The Ministry of Natural Resources has designated it as an “area of natural and scientific interest.” The ancient Mohawk archaeological site known as Davisville is here as well.

A couple of weeks after Graham’s sign went up, I noticed three more signs had arrived up the street.

The first sign belongs to John who has lived in Brantford since 1966. Retired, John walks and rides the trails regularly. He saw the two signs down the street and asked Graham, who he worked with in Cainsville, where to get one. John was born and raised on a farm which helped him understand the importance of water quality. I thought later that, like the planners Graham talked of, farmers may have a stronger understanding of the impact altering land because their livelihood depends on it. John thinks the trail area is nice and wants it kept. He’s not sure what impact a lawn sign has or if it will affect the ultimate decision but he still made the effort not only to get a sign but he ordered an extra for his next door neighbors knowing they would put one up without a thought.

As John said, Gerry and Kathy took a sign without a thought. It turns out Lou had stopped in to see them earlier and they had agreed to take a sign already as John knew they would. My conversation with Gerry took a different turn. “Apathy,” said Gerry, when we talked about why people in general didn’t get involved in things. “Unless asked, they don’t ask and let life go right by them.” We’re too busy with work, many times in another city, and other things. “It’s an on-going challenge. People go in the house and close the door.” To Gerry this is about a bigger issue, urban sprawl. “This isn’t the 50’s or 60’s when urban sprawl took over. The days of urban sprawl should be curtailed. We need other ways to build.” He went on to talk about McMansions and the short-sighted desires of people when it comes to urban planning. I thought about Graham’s planners and government’s responsibility to the community as a whole. Like Graham’s family and John, Gerry and Kathy enjoy the trails. “The domino effect when we start cutting down trees is huge. We destroy nature and then build a park as if that will properly replace what has been destroyed. I believe we are long term stewards of the land while developers see only immediate dollars… in someone else’s community.” I waited for him to say “carpet-baggers” but he didn’t.

Across the street from John, Gerry and Kathy lives Linda, who moved here from Burford in November 2011. She was working on her lawn when the other signs were being dropped off. There was an extra sign and it was quickly put up on her lawn. Although she’s a farm girl, it wasn’t until she heard Sheila Smith speak to a group in Cathcart about water quality that she really began to appreciate how import water is and how easy it is to contaminate it is. “It’s very important,” she told me. “We drink it!” New to the city and a regular trail user, Linda had always been on well water. She told me that you can get a positive test from a well and within two weeks find the same well contaminated. “People don’t know enough about water. You turn on a tap and there it is.” We talked about how many people, especially urbanites (city folk), who think food and bottled water is made in the back of a grocery store. Linda’s son works for a water treatment facility and Linda has fullest confidence in municipal water.

After speaking with these folks, I called Lou. She told me her involvement in this actually began in 1996. That was the year logging began down the road she and her family live on. She became concerned about how the forest was being logged especially around ravines and in the valley. She spoke with the GRCA and County who agreed improvements were needed to the by-laws and, after reviewing lessons learned since last by-laws were written, changes were made. While doing this, she came across Ilse Kraemer who was researching an area, near the Grand River northwest of the city, known as Davisville which is owned by Sifton Properties. With her experience from logging and by-laws, Lou agreed to help Ilse identify features that made the area unique.

The real issue is about Brantford’s Waterfront Master Plan and the public’s right to waterfront access. After two years of public consultation the City, with a consulting, firm created an award-winning plan for the lands along the Grand River within the City of Brantford. On June 28, 2010, City Council approved the Waterfront Master Plan in principle. The plan addresses many issues including: environmental Issues, River/Tributary Recreational Access and Use, Development Analysis, Land Use Analysis, and Tourism Opportunities. The next step is to fine tune it and then have it put into the City’s Official Plan.

Right now, in Brantford, the Ontario Municipal Board (OMB) is hearing arguments from three development companies as to why they should be allowed to proceed with development of over 1,000 new homes.

Lou told me her concern is that “the City will be saddled with liability concerns of flooded residential basements and unprotected source groundwater after the proponents are long gone from our community. Building in any area is not wise with insufficient scientific evidence regarding up-welling ground water, as geo-scientist Daryl Cowell has shown at the hearings. Sifton monitoring wells have not given enough information regarding possible flooding here and the effect on source groundwater.”

Since writing this, three more signs have popped up in our neighbourhood, reminding me that, however small, each of our actions can make a difference. To order your sign, e-mail: thracc@gmail.com.