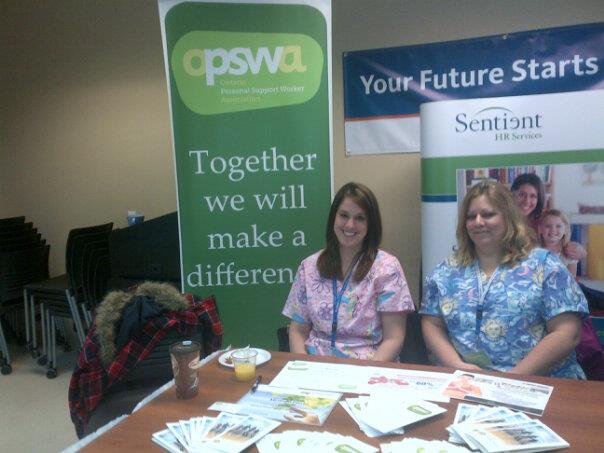 Today is a day I won’t soon forget. I am to provide care to twin infants that are non-responsive. They breathe and are cuddly, but they do not react in the same way as normal infants. They are deaf, mute, and they don’t wiggle and flex or react to stimulus. It’s pretty much bathe, feed and care for them during my two hour visit.

It’s eerily quiet except for the coughing that happens when they take in too much food when they swallow. At first, panic sets in because they don’t have normal neurological response to choking. So I was given instructions from their mother on how to deal with them. Basically it’s minor first-aid: We roll them over, massage their bellies and up it comes, and then they breathe. Just like it’s an everyday thing.

For me, I’ve seen nothing like this, especially at home on a long term basis. My two hours ends and, in a way, I’m glad it’s over. Usually I don’t do complex infant care. It’s very stressful territory. Sure, I’ve done it, but each case is so different. There is no direction from a supervisor (RN) so we have to carry on with our own knowledge, and be confident in our ability to handle situations where direction should really be given.

My ex-patient’s husband has taken a turn for the worse. She has mental health and addiction issues of her own and so does her remaining son. Her first son committed suicide. I’ll call her Hilda. She has asked for me to come with her to the hospital as he is in palliative care and is nearing the end of his life. He has battled bowel cancer for two years. He spent one year in hospital, pretty much since his first surgery, because she couldn’t cope with him having a Colostomy and because he had stopped his addiction to alcohol when he was in the hospital. I advocated for his return home as he was just waiting in the hospital; they were talking about a long term care bed for him soon. Upon his arrival home, his health declined and his cancer came back.

Today we are sitting bedside. I am with her for moral support, as there is nobody left in her life that is her friend. She is crying uncontrollably one moment, then is suddenly okay the next. I genuinely like this person as I get to know her vulnerability and her story, from the loss of her first-born by suicide. She is genuinely a nice person deep down. Her husband is a dear and gentle man who was in the Navy, and has worked very hard for his young years of 69. As a result of his first wife passing away very tragically at a young age, he has suffered from severe depression. Then he met Hilda and they were happy for 20 years until his illness.

In all the years of home care they received, not once had anybody helped with their mental state, they just took care of the medical tasks associated with the home care. For me, that was the saddest part of the story, and was why I’d become a family friend.

At 2:30 p.m. that afternoon, his chest ceased to rise. So I went and got the nurse so she would confirm it to Hilda. Hilda, now 70, is in a nursing home. She has lost her mind and remembers nobody; her heart broken permanently.

It’s my last visit of the day and the worst place I could go. But I go because my patient would have no visitor otherwise. They have been told that they will be placed in a home if they don’t get the apartment sprayed or receive help from family. The lady is on oxygen all the time, is still active and gets out in her electric scooter often.

The day before my visit I had heard she fell in an intersection, hit a bump and was helped up by a stranger. Then her scooter battery died so an ambulance brought her home and put her in bed. So I’m not sure what I’m walking into today.

I find her black and blue, with bruises from her accident, but she refuses to go to the hospital. She wants to have a bed bath so I provide her with the care she needs and is willing to accept. She has been refusing to eat since she’s really upset that she is unable to get out of bed today and go out in her scooter until they fix the battery issue. I convince her to have a bowl of soup and some tea and juice. As I go into the kitchen the cockroaches are all around, and they scatter when I open the door of the cupboard.

With my visit complete I say my professional goodbye. Looking back I realize it’s the last visit I’ll have. I do hope that they find the help they need in a new home. And I’m hoping both her and her husband can find a place together, but I’m not entirely sure that he takes good care of her. The situation is bordering on mental abuse in my opinion. Nobody asked my opinion and I have not ever witnessed anything to report: It’s more of a sad reality when I see how she is after she’s been alone with him. It’s almost like we are her protector when we visit her.

This is my final entry before I am outed by the government, as I refuse to let them take my privacy right away by being registered, and they work on the creation of E.S.A. We have no laws to protect us. We are in desperate need of basic worker rights regarding issues surrounding harassment, pay, hours, etc. I’m moving onto Advocacy and Education for PSWs, that’s my new focus. I’m hoping for a new Career path. Writing is a passion I will continue; be it another topic of interest relating to PSWs.

Thank you for your following and appreciation.