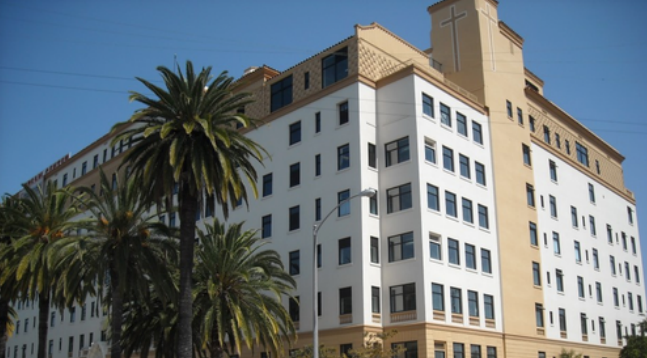 In October 2012, I got to take a trip with a team of volunteers from Freedom House to the Dream Center in Los Angeles. What is the Dream Center? It’s a Christian mission in the Echo Park neighborhood of L.A., California. It’s actually an old hospital that has been renovated to house over 100 different types of outreach to the surrounding community. The list is too long to share, but included are housing for victims of sex trafficking, an addiction recovery unit and a program to help families that are at risk of losing their children to state intervention. I stood in amazement at the facility. I actually thought to myself as I looked upon the facility, “Who has the guts to dream this big?”

The Dream Center is the work of Pastors Tommy, Matthew and Caroline Barnett. Each month the Center touches the lives of over 50,000 people and offers housing to over 500. I can’t even begin to tell you the amount of food that is given away each week by this amazing group. Pastor Tommy’s line is, “Find a need and fill it, find a hurt and heal it.” He isn’t just talking. He means it. Since building the original Dream Center, over 100 similar projects have popped up all over the world. Truly inspiring. The Dream Center is one of the concepts that Freedom House was built on. Each day we were given the chance to participate in two different ministries that the Center ran. While there are many stories I could share, I don’t think anything could have prepared this upper middle class Canuck for what I encountered on our trip to Skid Row.

Try to imagine 6 to 8 city blocks just lined with people. They are mostly sitting on the sidewalk. This is where they live. This is where they sleep and eat. I don’t mean to sound overly dramatic, but there is a sense of hopelessness that permeates the area. In my life I have never known hunger or want. I have always had more than I needed and still whined that I wanted more. I felt an odd sense of shame as I entered the area. I didn’t belong here. Not because I was better than anyone else. I felt on some level like trying to help here would be perceived as condescending. It was seen that way by a few to be sure. The other reason I didn’t belong here was my colour. In all the crowds of humanity I saw that day, there was rarely a white face to be seen. I’m not sure what this says about American culture. I saw at least one homeless man wearing an Obama shirt. I chuckled to myself at the time. How had a black president made his life any better? Clearly, nothing had changed for him. My guess is that to him, it was purely a symbol of hope. A black man held an office that many thought would never be held by a black man.

We entered one of the many shelters in the area and began to distribute food. People were asleep on the concrete floor of the outdoor shelter. No pillows, no blankets. Face down on the hard pavement that everyone else walked on. I must confess to a sense of despair as we began our work. So much need. We were a drop in the ocean. We feed maybe over 100 people. There were thousands more all around us. Serving food meets the immediate needs of some, but doesn’t solve the underlying issues. How do we solve this problem? I asked myself again and again knowing that greater minds than mine have wrestled with this problem for ages and come up short. Two things were perfectly clear to me however. The problems of addiction and mental health. The streets were lined with people who had fallen through the cracks in the system. I spoke to many people who were clearly not well mentally. I spoke to many others who were desperately trying to escape through the use of drugs. I can’t say I blame them.

Like animals locked in a cage, we saw numerous eruptions of anger and frustration. Police arrested two men on the street and had to use force to apprehend them. For a moment, I thought we were on the cusp of a riot. Crowds of angry street people gathered around and yelled as police cuffed and took away two of their own. We were actually locked down in the shelter during the arrests. One of the police men I talked to later in the day looked like he was straight off of the cover of Muscle and Fitness magazine. A very large and muscular African man. Good choice. He’d have to have the heart of a lion as well. As we climbed back into our van to head home, a woman on the street dropped her pants and began to defecate in the garbage bin beside her bed on the street. When she finished, she crawled into her bed and pulled the blankets over herself. That corner of the street is her whole world. As we drove away, I was reminded of why we try so desperately to avoid these issues in our daily lives. It’s because they require us to both think and feel. I don’t want to feel the pain of this issue, so I just won’t think about it.

We had our evening free that day and the ladies in our group really wanted to go visit Hollywood, not more than an hour away. A short drive from where we stood with people who didn’t know where their next meal was coming from was a mecca of consumerism. BMW’s and overpriced fashions and five dollar coffees. How could it be, that these two worlds existed so close together? How could it be that there was so much for some and so little for others? Honestly, being in Hollywood that night made me feel even worse about what I had seen that day. I was thankful to be a Canadian. Our social safety net is much better than that of our American cousins. The problem is not as pronounced as what I witnessed in L.A. But it exists here, all the same. I have no pictures of my time on the street. We were warned by volunteers at the Center that street folk did not want their pictures taken. For me, there were none needed. The images I saw that day are in my head to stay.

My daughter Haley came with me on the trip. The desire to feed those who can’t afford to eat still burns within her. That alone was worth the price of the trip.