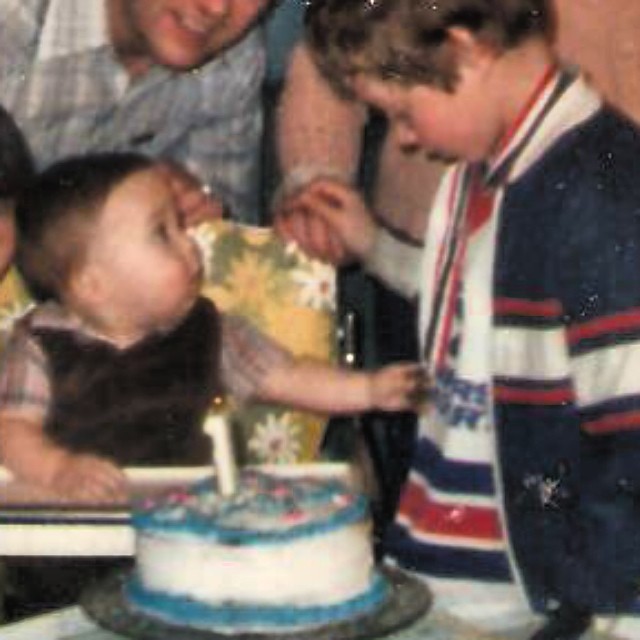 In the pages of the Brant Advocate I have written a lot about the bigger moments that make up my life.  The time when I was a kid when my Dad came home from the construction site with really dirty hands and pushed me to stay in school as long as I could – comes to mind.  As do columns about my grandparents, my political mentors, my best friend and my wife.  All of those are these really large stories of influence – seminal moments of life, love and even death that shake you, break you and make you.

But what about those other kinds of influence?  The ones that have a smaller effect at first but over time make huge impacts on your life?  While my Grandmother Isabelle has probably had the most influence on what I’m like – she was this amazing community advocate, volunteer and teacher, it’s someone else that has had more everyday influence on me by a long shot – my cousin Chris.

Chris was – and still is – my cool older cousin.  He was older than me, played guitar and had long hair, he lifted weights and did Judo, he had friends and girls liked him!  As a kid you’re always looking for that person who is older than you are to guide you into the world of pop culture and social graces.  If your lucky this person also steers you away from trendy trends and shows you cool things you wouldn’t have ever considered.  Chris was that guy for me.  For a lot of people that person is an older sibling. I didn’t have an older sibling to expose me to the things I should like, to let me know what was coming down the pike a few years later – but I had Chris and Chris was way cooler anyway.  All the best parts of an older brother without having to fight for the bathroom every morning or over chores and the last helping at dinner.

Someone else taught me how to read but Chris taught me to love to read when he  exposed me to how cool Batman could be.  Batman turned into Denny O’Neil, Len Wein, John Byrne and Jim Aparo and when the time was right Alan Moore, Neil Gaiman and Grant Morrison among many, many others.  The love of reading he exposed me to I’m sure got me through grade-school when the bullying was rough, high-school when I needed more stimulation, and university where I would have been struggling just to keep up.  I still read everyday – and to this day I read at least one comic every night before bed to unwind.

I remember being at his house one weekend when I was 7 and being so bummed out that I wouldn’t be able to finish reading his copy of “A Death In The Family” – the Batman comic where Robin was killed by the Joker – before I had to go back home because I was too slow a reader and this was the largest book I had ever tried.  So he read me the entire book, with different voices for each character, and took a break when I started to cry to talk to me about life and death when Robin did die.  Robin was my favourite after all.

When I was listening to The Simpsons Sing the Blues and New Kids on The Block and whatever else was “in” Chris was there to show me why I should spend some time with Billy Joel, Bruce Springsteen, Guns and Roses and Jimmy Buffet.  He was exposing me to song-after-song of stuff I would never have considered or found in the pre-internet era I realized that it was not just ok to have diverse musical tastes but it made the soundtrack of your life way better.  And later in life on one of our many record-store road trips he introduced me to the songs of a guy named Warren Zevon.  And much to my wife’s chagrin but to my ever-lasting joy this has become my all-time favourite musical artist.

It was Chris who took me to see Tim Burton’s Batman, and challenged me to watch Clint Eastwood movies when young me thought acting couldn’t possibly get any better than Pauley Shore.  Chris was there to convince me that even though I wasn’t a horror fan like he was that I should give zombie movies a try because they were actually a commentary on society.

Chris taught me that it’s ok to travel for an hour and a half to see a movie you really think will be special and while you’re there you might as well check out all the record stores, used book stores, video stores and comic book shops in the area too.

Recently at my bachelor party Chris and I were chatting – while watching Wrestlemania (yup another of Chris’ influences at work) and going over all the times we’ve seen Mania together or went to see wrestling live.  That time in Sudbury when I was little and he took me to watch the Ultimate Warrior beat both Dino Bravo and Earthquake.  Of course I got hooked right there and then!  I remember none of the kids at my school could believe I got to see that live.  This led to Chris showing me you could actually rent tapes of the stuff at Major Video, and in Brantford at Jungle Video. Well I had some catching up to do and continued to watch.  We went to see WWE Breakdown at Copps Coliseum in 1998 and saw Steve Austin drop the title and just last month we went to a show in Toronto to watch Daniel Bryan as the latest WWE Champ.  It’s been quite a pop-culture ride over these many years.

What I realized recently is that there is not one day that goes by where I don’t do something that my cousin Chris introduced to me.  Comic books, reading, good movies, good music, wrestling and that all of those things are my go to self-care things.  In an increasingly busy and cynical world these are the things that help me relax, chill out and enjoy and they have all stuck with me since I was 8.  That is real positive influence.  And incase I didn’t say it at my bachelor party let me say it now, everyone needs a cooler older cousin – I’m glad I have mine.