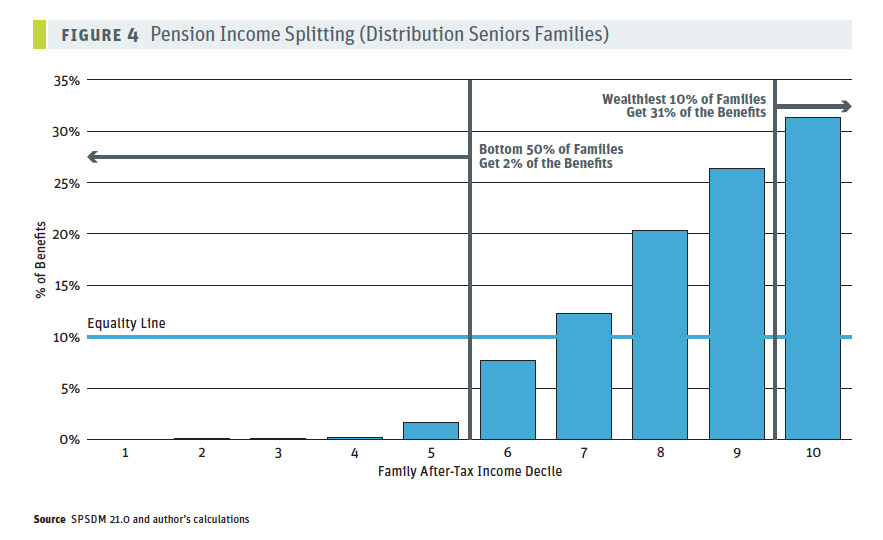 The family split inside the Conservative Party over family income splitting is pure gold for political junkies. First, the Finance Minister publicly trash talks the key election promise of the Prime Minister, now that the implementation date is fast approaching. Senior ministers respond by doubling down on the plan to allow families with children under 18 to split their household income, up to $50,000. Then the Prime Minister’s Office chimes in, whispering in reporters’ ears that this was all part of the plan: Harper was having doubts about the $3 billion Mad Men giveaway, so he sent Flaherty out to throw cold water on the idea.

But let’s get back to the policy and Flaherty’s central criticism of it. “I’m not sure that overall it benefits our society,” Flaherty explained. Flaherty is right: an analysis of the proposal shows the Conservative plan is skewed heavily in favour of wealthy two-parent families, with the vast majority of families (86%) receiving no benefit at all. Too bad so many of the federal tax breaks are skewed toward wealthier Canadians, exacerbating income inequality.

Don’t take our word for it. Peter Devries, a former director of fiscal policy at the Department of Finance, lays it out in the Globe and Mail. “Mr. Flaherty’s main argument against income splitting — that the benefits are not broadly shared — applies to many of the 160 targeted tax breaks that Conservatives have proudly introduced since 2006,” Mr. Devries pointed out.

The tax credit, introduced in 2007, was designed to promote physical activity among kids, but research shows that the $100 million annual expenditure (in foregone federal tax revenues) doesn’t reach families in the different income groups equitably. Amin Mawan, a professor of taxation at the Schulich School of Business at York University, studied the program and summed it up in an article titled, The fitness tax credit is a subsidy for the rich. “Our analysis of federal tax-return data showed that those in higher income groups benefit more from the CFTC. Households earning over $200,000 claimed, on average, more than $250 in additional eligible physical activity expenses than households earning less than $40,000.”

The federal government dolls out about $1.6 billion in tax credits each year to help students pay for college and university, and  it “turns out the rich kids are getting the lion’s share” of the federal and provincial education tax credits. That’s the take away from a recent report from the C.D. Howe Institute. Key findings include:

•10 per cent of people using education tax credits have an income above $80,000, but they receive 42 per cent of the total credits;

•and about half have incomes below $30,000, but they only get 7 per cent of the total credits.

Pension income splitting was implemented in 2007, and is estimated to cost $1.7 billion by 2015. A study released last month by the Canadian Centre for Policy Alternatives found that seven out of the 10 senior families get no benefit at all from the initiative. Meanwhile, the richest 10% of senior families receive more than the bottom 70% combined.

Here’s a snapshot of what this looks like, courtesy of the CCPA: