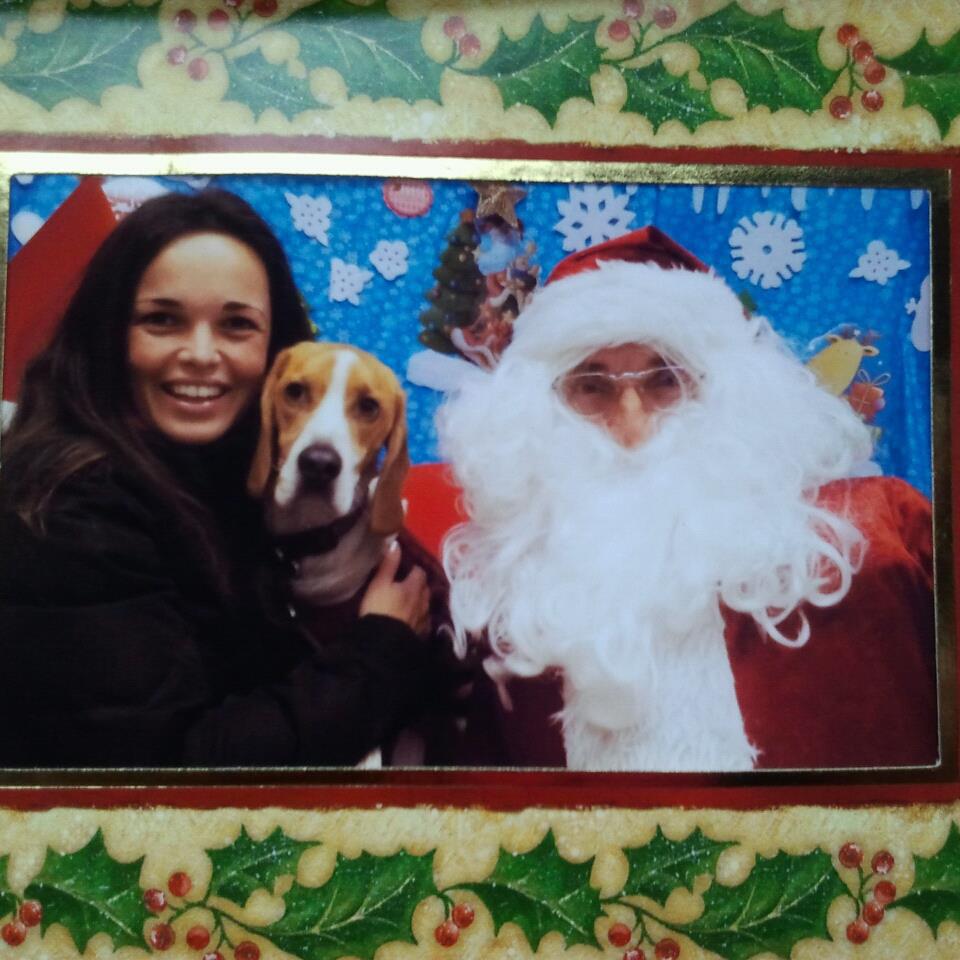 They say that the Universe/God/Allah/The Creator/The Goddess, whatever name you assign the power that is greater than humans, presents us with opportunities, often in disguise, to learn from and grow, to practice our weaknesses into strengths.

Frankie has been my opportunity.

He is a 25 pound beagle with big floppy ears and sad, soulful eyes. This is the kind of dog whose charm allows him to steal a sandwich right out of your mouth with no repercussions, except a light scolding about respect for boundaries which is cut short with a, “Don’t look at me with those eyes,” plea.

Love oozes out of this dog with little yelps and kisses and jumping around every time he sees someone he knows and has missed. A wicker box holds all his outfits, and all his toys are strewn across his couch – yes, his couch. He loves to cuddle with people any chance he can get, and loves even more to watch the ducks at the pier. His life the last twelve months is very different from his first eight.

When I adopted him on November 1, 2011, he was being fostered by a volunteer with Ugly Mutts, which is a rescue in Hamilton. His name at this time was Sam, and he had suffered abuse in his previous life. I changed his name to Frankie because Frank Sinatra is one of my favourites, and with the singing skills of beagles, I thought it was an appropriate name choice.

I have always had dogs, but those experiences did not prepare me for Frankie. He was not house trained, nor had he ever walked on a leash. I found out quickly that if someone stared at him, he went into hysterics, howling and crying, and would only stop if someone rocked him.

It has been over twelve months of speaking to him gently, making him feel secure, walking him every day, and providing opportunities for socialization. He is a very different dog now from who he was when he first came to live here.

Frankie still has his challenges. There remain a lot of issues with him and trying to work through them can be very trying. He scares easily. Every time we walk and we come across another dog, he unleashes a howl that sounds like it is coming from a mythical creature. Sharing toys is a huge issue, as is sharing attention with other dogs. He has a lot of dog friends, but can be very territorial with even them. I had to buy him a raincoat because he refuses to step foot out of the house during any level of rain. As well, I have had to buy him waterless shampoo by Paul Mitchell (it is great) to avoid the horror of having a bath. And he has a life jacket to learn how to swim at the beach. Slowly, we are bringing him into the full hound that he is – at his own pace.

People have been very kind. When you are in my kind of work it is sometimes difficult to remember that there is a lot of goodness in this world and the opportunities afforded you to witness kindness are a blessing, and give you energy. He loves the women I work with and can’t wait to get out of the truck and into the house to see them all. My mum babysits him all the time and tries various ways to socialize him. Other people in my life, including those I work with in the community, are always helping me with Frankie with positive messages and different training techniques. There are dog beds just for him at the houses of those whom I am closest with because he needs to have a safe place, wherever he is for when he gets overwhelmed or overstimulated. I worry all the time that other people in my life are going to give up on him before he comes into his full being. I can see it in his little face how hard he is trying to keep it together.

Patience has always been an issue for me. A Mohawk Elder I worked with while I was in university identified this weakness in me when she was sharing a series of traditional teachings with our student group. I had never really thought of myself as impatient. I have always worked with children, and for years, had and have been involved with crisis/trauma work, both of which require patience. When she shared her observation with me, I realized that I like things to happen, and I like them to happen now. With people, the practice of patience is very different. Patience, when it comes to process or project, is an entirely different entity. Frankie’s rehabilitation is a process. It is fluid. It has stops and setbacks, as well as gains. Things work and then do not work, and I need to always be finding new ways of helping him through the world. Patience is a necessity. My other weakness, is that I rarely ask for help from others. With Frankie, I have no other choice but to be humble and ask those in my life for assistance and support.

Frankie is a pretty funny little dog with quirks, good days, and bad days. As I write this, he is sleeping under a mountain of plush toys on his couch, quite enjoying his second chance in this world.