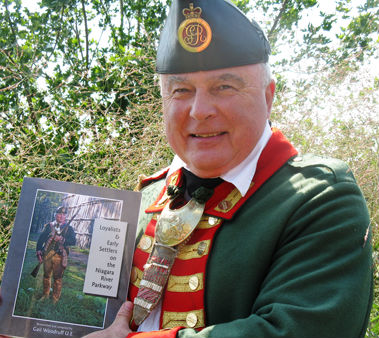 I do a fair number of speaking engagements each year for schools, teachers and/or students, as well as all kinds of organizations all over Ontario. Every single time that I approach the speaking platform, I repeat to myself something like this, “It’s not about you Zig. Remember, you’re not here to let everyone know what you think you know. You’re here to stimulate thought and conversation. You’re here presenting your opinions from your perspective only, remember that.” My conversation with myself just before I speak reminds me to be humble.

I was asked to present to you the reasons as to why I find history important. I decided to focus on First Nations in particular, especially the Six Nations during the War of 1812, and it’s 200th anniversary which started last year and will continue until the end of 2014.

Well, let me start by referring you to my web sites (Realpeopleshistory.com and warof1812rph.com) which are loaded with all kinds of articles, information, links and reasons for much of what I do. Take a look. I’ll wait a few minutes for you to come back.

Ok, let’s start. Don’t start yawning yet. A short book definition of “history” is “a cumulative knowledge of past events.” So what does that include? Well, in fact, it’s about you. It’s about me. It’s about all of us. No one can escape the fact that we are the sum total and living breathing specimens of all our ancestors. Your ancestors and mine somehow survived wars, plagues, massive earthquakes, volcanic eruptions, tidal waves and a myriad of other things. Your ancestors and mine were actually around, somewhere and maybe a part of, the building of the Pyramids, the construction of the Great Wall of China, the rise and fall of the Roman Empire, the invasion of Europe by Napoleon and yes the War of 1812, WW1, WW2. So here we are. Everything, absolutely every event that’s taken place since the beginning of person-kind has to do with you and me. In fact, yesterday is a part of your history. This answers the first question.

I am in Canada because my country, Poland, was ripped apart by the Nazis and Soviets during WW2. My father as well as many other immigrants, or displaced people as we were called then, left Europe after the war. Poland was taken by the communists and my family, those that were still alive, spread all over the world. Australia, France, England, the United States and for me and my parents it was Canada. We took our first steps toward our new home that turned out to be Brantford, at Halifax’s Pier 21.

Here’s where I have to make a potentially long story very short. As I was growing up, I became extremely interested in those people from the reserve that I later found out were the people from the Six Nations of the Grand River. For the next 63 years of my 65 and a half years on this planet, and in this wonderful community of ours, I increasing amassed more information through lots of reading and over time made many friends that either live on the Grand River Six Nations or off the territory, but who are of Haudenosaunee (Six Nations) bloodline.

I became infatuated with their history. As a first generation Canadian I threw myself into knowing as much about our city, our county, and our neighbours as possible.

So here I am. I love my new country. My parents are both gone and buried in its soil. They, as many others, came here for similar reasons and contributed a great deal to its growth, making Canada one of the best, if not the best place to live on this turbulent planet. I love my community. My children, Shaylyn, Ryan, Daryl and Tyler are now first generation Canadians. I’m determined to make a strong, positive and long lasting contribution to my new home, without forgetting my roots. I’m determined to do whatever I can to bring peace, to build positive bridges between our communities. I want to leave a good legacy and not be a part of any destructive force on any level whatsoever. I want to do my part for my family and my community, expressing my never ending gratitude to this country for taking in my parents in their time of need.

That’s why I like history and why I feel it’s important. It’s the only way I can express being the best citizen and human as possible. The recent War of 1812 anniversary has garnered a great deal of public interest. I decided to take advantage of this attention and my assumed knowledge, putting it out there to help others understand the First Nations the way I do. At least encourage many to look at the Six Nations from a place of good information and understanding. My new book War of 1812: Highlighting Native Nations has only been out a few short weeks and has sold nearly 2000 copies. It’s very clear that people want to know. I paid for the publication and had it printed locally. I decided to do my part and spend my money with the people that live here. I knew this book summarized a fair bit of the knowledge I have accumulated over the past years and it was a vehicle for sharing it.

We, the citizens of Brantford, Brant County, the Six Nations and those of the Mississauga of New Credit are distinct and beautiful fibers in a common tapestry of mutually shared history. Though the First Nations have lived here longer our paths have crossed and we now share the future. Fear creates unpredictable results; however, knowledge melts fear away. I want to be part of that melting force. I want to help eliminate our collective communities fears and have us all live in a better place.

That’s why our history is important to me and I challenge you to get to know us better, get to know your-selves better. Should I say it? Okay, I’m a baby-boomer and have the right to, so give peace a chance.