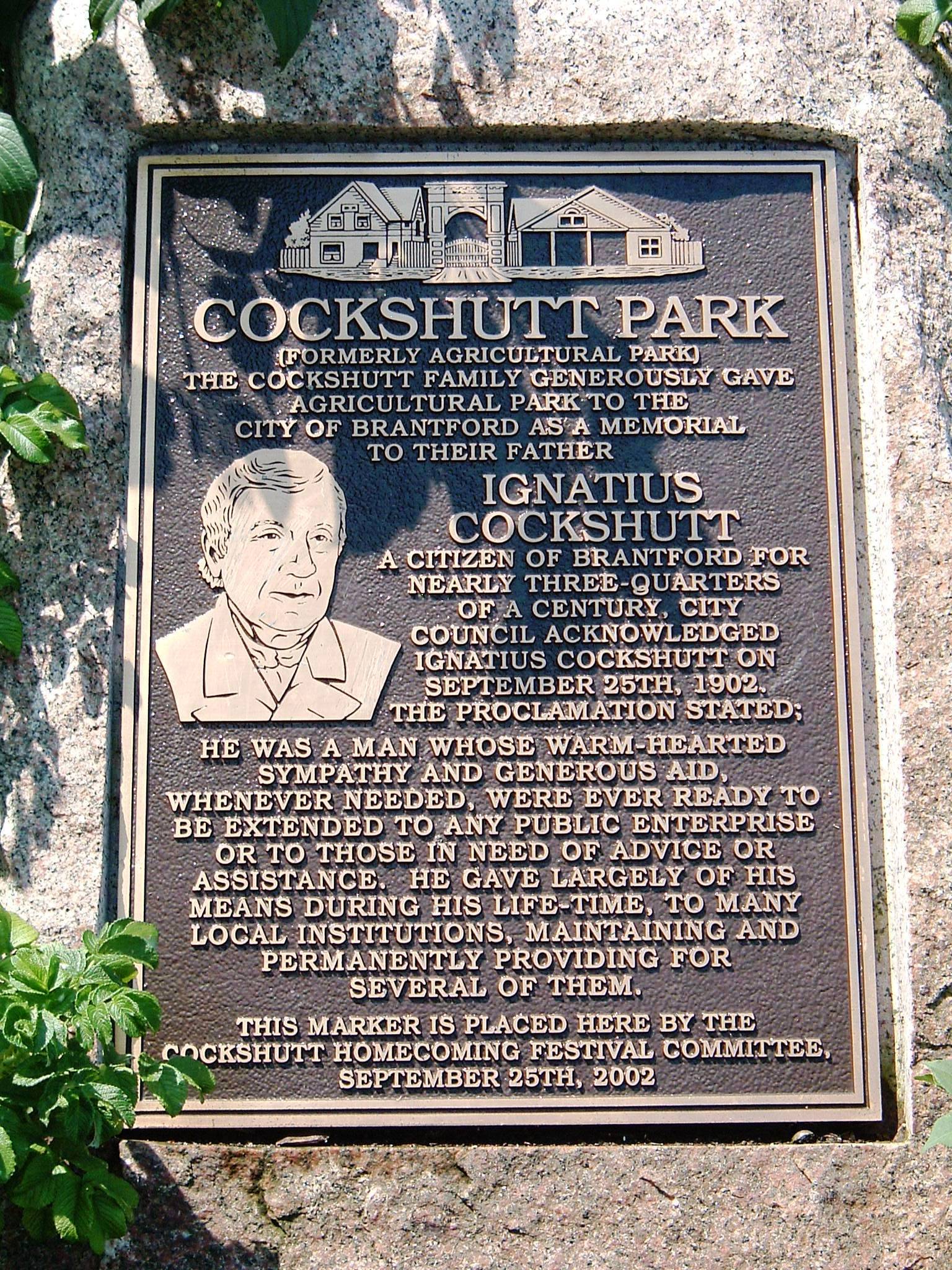 With so much emphasis this year being placed on the bicentennial of the War of 1812, it would be easy to overlook a 200th anniversary of a very different nature; one that hits a lot closer to home.

Ignatius Cockshutt was born on August 24, 1812 in Bradford, Yorkshire, England. As a teenager he immigrated to Upper Canada and settled in York (now Toronto) in 1827. It was here that his father, James, opened a dry goods store. With the success of this venture, it was decided to expand the family business in 1829 by opening a branch store in a small settlement to the west, in the recently named Brant’s Ford. The experiment failed and Ignatius returned to York to rejoin his father.

In 1832 Ignatius persuaded his father to let him try to reopen the Brantford operation. The second attempt proved successful and launched Ignatius on path to wealth and influence that few others of the day were able to achieve. In 1834 James Cockshutt left York to join his son in the rapidly expanding branch store that was now the sole focus of the family business. Ignatius had indeed proven himself to be a gifted and visionary businessman, and James eventually sold the store to his daughter Jane and Ignatius in 1840. From humble beginnings of a general store, Ignatius expanded the operation to become a full line department store which he named “The Merchant’s Exchange”.

Not being content to rely entirely upon the revenues of the Merchant’s Exchange, Ignatius invested heavily in real estate to the point that by the time Brantford was incorporated as a town in 1847, he was its largest property owner. Municipal tax rolls, from the year 1880, show that he owned 41 rental properties, as well as 21 farms in Brantford Township. He also held the mortgages on no less than 10 factories during Brantford’s emerging manufacturing sector in the 1870’s. Not forgotten is the fact that he supplied the start up capital to his son James in the founding of the Brantford Plow Works, the forerunner of the Cockshutt Plow Company.

One notable investment that he chose to avoid was the telephone. Alexander Graham Bell had asked for his support, but Ignatius felt the idea was nothing more than fantasy and declined the offer. While usually wise in almost all of his business decisions, only history will be able to judge this particular choice.

Ignatius Cockshutt was a man who was driven by his convictions. Among these were a strong work ethic, honest and fair business practices, and religious beliefs that compelled him to give back to others.

In purely civic affairs he engaged in pursuits that would be a boost to Brantford in order to make it a leader in commerce over other communities. It was his firm belief that a prosperous Brantford would benefit all citizens, not just his own business concerns. As early as 1848 he showed great leadership in arranging to have a fire well and pump constructed in the business centre of the town in order to better protect businesses from the constant threat of fire. Later in 1860 he lobbied the Town Council to establish a formal fire company. Ignatius was instrumental in setting up the first Board of Trade, and was elected its first president in 1866. He was a shareholder and board member of the Buffalo, Brantford and Goderich Railway, and held the presidency of both the Brantford Gas Works and Brantford Waterworks.

His personal acts of charity and philanthropy, which are too numerous to mention here, were a natural extension of his Christian beliefs. He was a founding member of Farringdon Church near Brantford, which is a sect of Methodism known as Inghamites. Ignatius was a lay preacher in the church and supported two missions in Jamaica. The people of Brantford owe a great debt of gratitude to the social institutions that he established and continue on to this day, such as the House of Refuge; Brantford Widow’s Home; Brantford Orphan’s Home, and both the YMCA and YWCA. Even after his death, he provided for the ongoing care and maintenance of these facilities in his will. He also gave extensively to the poor at every opportunity that presented itself. These character traits were instilled in his children and successive members of the Cockshutt family. Upon his death on March 1, 1901, there was such an outpouring of public mourning that the whole city suspended business and several factories closed their doors out of respect for him. After leading a very full life that included both failure and success, Ignatius Cockshutt had earned the titles of “Mr. Brantford” and the “Grand Old Man of Brantford”. He had helped transform Brantford from a crude frontier settlement into a thriving city of national importance. Along the way he never lost sight of the plight of others and his own ability and duty to help. Happy 200th Mr. Brantford! It couldn’t have happened without you.

For further information on Ignatius Cockshutt, check out these resources available from the Brantford Public Library:

“About Cockshutt”, by William H. Cockshutt.

Bits and pieces of Brantford’s history: the history of the Cockshutt family, by Gary Muir
http://brantford.library.on.ca/archive/index.php/archive/article/157