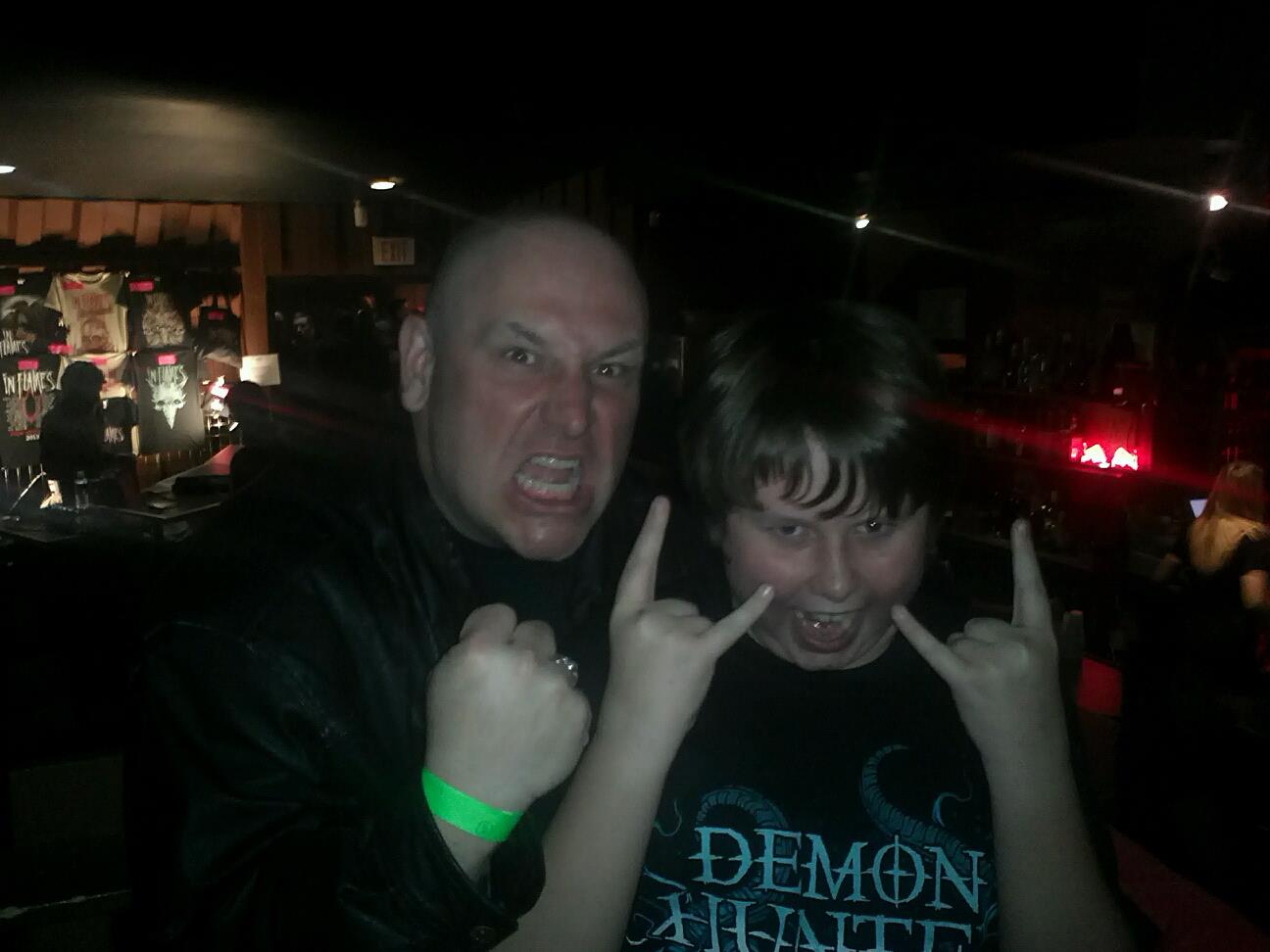 I remember laying in my bed on a school night. I was listening to Q107’s Top Ten at Ten. I was listening with a big fat pair of old school headphones with the curly cord. I had no idea who Ronnie James Dio was. All I knew was that I was laying in bed listening to a countdown show that actually featured hard rock and metal music. Then I heard Dio’s “The Last in Line” for the first time at the age of 14. When he hit the line, “We are coming (big dramatic pause) home!” my life changed forever. The screaming guitars, the apocalyptic imagery and a voice that had the power to knock you over. I was in love. I had it bad. I was a metalhead.

My first real exposure to was AC/DC. Dio was phase two. Phase two was metal. Phase one was hard rock, metal’s predecessor. I loved “Dirty Deeds, Done Dirt Cheap” when I heard it on the radio while staying over at my grandmother’s house with a cousin of mine. He opened the door and I walked through. My first album purchase ever was “Dirty Deeds” for $6.99 at my local Woolworth’s. I was young, male and mad at the world, though not because I actually had anything to be mad at.  I was a privileged, upper middle class, white male teen. Let’s chalk it up to the testosterone. One minute you wanted to have sex and the next you wanted to punch somebody out. It was a strange time. I wouldn’t want to go through puberty again for anything. I watch my kids going through it right now and I just wince.

Speaking of things that make me wince…the music of the 80’s. Blah. When Boy George asked, “Do you really want to hurt me?”, my answer was an unapologetic yes. Pop music fluff seemed to be everywhere. New wave and pop did nothing but make me want to smash things. Metal did that too, but with a much greater sense of joy. Life was timid and lame. Metal was wild and dangerous. It was the music that made your parents worry for you. The more disturbing your album cover, the more likely you were to sell albums, and the more you wanted to show them to mom just to watch her reaction. After my mom’s initial reaction to those early Dio albums she put me on the church prayer chain.

This is where worlds collide. At a young age I was also a religious zealot. I turned my life over to Jesus just before my 12th birthday and it was something that actually stuck. Metal, was bad. Scads of books showed up in the local Gospel Lighthouse declaring metal to be Satan’s A #1 tool for recruiting impressionable youth. It was godless and evil and leading our kids down the road to moral chaos! I never did have a taste for the truly Satanic stuff like Venom. Still, being a church boy, I felt the condemnation. At one point, I ended up tossing a good bunch of records out to ensure my spot in heaven.

In a desperate attempt to keep me on the right side of the law with Jesus, my mother picked me up some Christian “rock” records. Nice try, ma. Amy Grant and Petra did not cut it for a young man who had heard Iron Maiden and Black Sabbath. Those records ended up on the bottom of the album pile. But then she came home one day with a cassette tape of some new band called Stryper. Mind blown. These guys were metal. Real metal. And they were good. From that point on, the landscape changed. There was a new metal subgenre that I could enjoy without internal conflict. It was Christian metal. It is by far the most unloved and disregarded category in the metal universe. There was hard rock, metal, glam,  speed, thrash, death, black and more. Because metal had traditionally been associated with anger, rebellion and Satan, the idea of Jesus metal was blasphemy to the scores of long haired, jean jacket wearing metal disciples. But for me, I had found my music. I can bang my head and worship God? I’m home.

The truth is that in many ways my love of Jesus drove me further into metal’s arms. You see, metal was always the music of the outsider. It was written by and for those who didn’t fit into society’s norms. It was the shrieking voice of those who had been banished from the land of normal. My love of God didn’t fly with many of my high school chums who thought life was all about babes and trying to score beer. It made me feel awkward. More awkward than a teen already feels. Taking a strong moral stand at a stage of your life where you’re not sure of much, took some guts and cost some friends. When I felt alone, the music was there for me. I spent more hours in my teen years alone in my room with the stereo blasting than pretty much anything else. It was my safe place and the music soothed the savage beast. I heard the pain in those songs and knew that somebody out there felt like I did. I wasn’t alone. Sadly, church didn’t help. Even the new Jesus rock was considered a perversion.

I eventually bought back those albums I had tossed. Unlike many of my fellow churchies, I learnt that not everything is meant to be taken literally.  My love of metal, both secular and Christian, continues to this day. My boy, now 14, has picked up the torch. Maybe my all time favourite Christian metal band is Demon Hunter. In over 10 years together they never played a single Canadian date until this year. They opened up for In Flames 35 minutes away in Guelph. My son and I went and lived a dream together. He was so excited he didn’t sleep the night before and crashed as soon as we left the show. Even though they only played a 40 minute set, we screamed our lungs out during every tune. I know it will be one of those father/son moments we will always remember. I remember metal when it was the voice of rebellion. Now when I go to catch Iron Maiden, Megadeth or Judas Priest I see balding metal head fathers rocking alongside their teen sons and daughters. Metal has become family entertainment. Who would have ever thought?

I must confess that the flame doesn’t burn as brightly as it once did. At 43, banging my head just leads to a sore neck. My mullet is long gone and so is my giant cross earring. I can’t listen to the really extreme stuff anymore. I’m just not that ticked off and I don’t have the energy. But even though some of my listening habits are starting to soften, metal will always have a place in my heart. When the weight of everyday life gets me down, there’s still nothing more therapeutic than cranking up my home stereo and throwing up the maloik. If you don’t know what that is, you ain’t metal. \m/