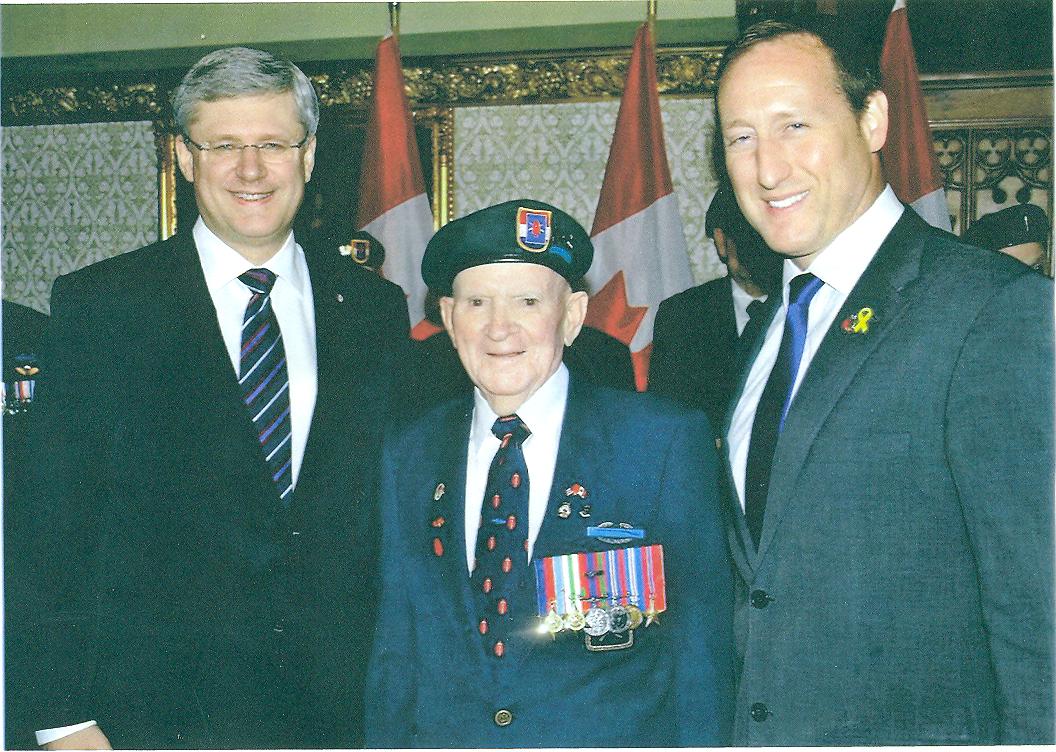 This article is about remembrances of Remembrance Day. For those of us who have not fought in wars, nor been called upon to defend our country, it is hard to fathom what a veteran truly feels. I know that my father never talked about WWII. In fact, my only recollection of him having said something about his war experience was when my brother and I were throwing a knife at a post that held up my mother’s clothes line. We were not having much success when my father came by, picked up the knife, and threw it at the pole where it stuck. We tried to pull it out, but couldn’t. When we asked him where he learnt to do that, he said in the war!

My Uncle Bernard was a little more forthcoming when it came to talking about his experiences, though he generally did it with humour. He was a Master Sergeant and was responsible for making sure latrines were available, shelters were put up for canteens and medical quarters, and roads were cleared for the troops. I remember him telling us that one time he was trying to get latrines finished, but everyone was ill because of bad water, and needed to use the facilities quicker than they were finished. I remember the great smile on his face when he told me that all he could do was assign trees and hand out toilet paper.

I recall in the mid-1950’s standing out in the cold at the Penetanguishene cenotaph waiting to hear Prime Minister Louis St. Laurent talk about the price paid for democracy by those who fought in the World Wars and Korea. It was not until I met my wife’s father, however, that I encountered someone who would actually discuss his war experiences. He was a big man, and was one who was readily identified to be a stretcher bearer, which meant that he had to deal with the wounded and dead on the field of action. It now strikes me how much courage it takes to do something like that, let alone move on after the war is over.

More recently, I met Hector MacInnis during a trip to Nova Scotia. He is my wife’s Uncle, and someone I could easily describe as a character. Hector is neither tall nor young. Born in 1925, his wit is as sharp as most young people’s I run into. Our first encounter was when I was trying to explain to my wife’s cousins that I had had a heart attack last February.

Hector said, “I don’t believe you!” I was a little stunned and turned to Denise asking her to confirm my story.

“What do you mean impossible,” I said becoming a little more frustrated.

“Well,” said Hector, “you’re a Tory, and Tories don’t have hearts. So how could you have a heart attack?” And with that comment, he burst out laughing.

Over the next couple of days, I got to learn more about Hector. He grew up in Judique, Cape Breton. During the Second World War, he and his four brothers enlisted and served in Europe. After the war, he worked on the Canso Causeway, married Evelyn MacNamara, raised three daughters, and served on the Port Hawkesbury Town Council for 37 years.

During the war, Hector joined the Devil’s Brigade, a joint command made up of Canadian and American soldiers. Formed in 1942, it was the 1st Special Service Force to provide advanced attacks behind enemy lines. Their members were trained in rock climbing, ski warfare, hand-to-hand combat and parachuting. They saw action in Italy and France. In 1968, Hollywood made a movie called The Devil’s Brigade starring William Holden which was based on their capture of La Difensa in 1943.

In January 2013, Hector and twelve other veterans who had served in the Devil’s Brigade received the Canadian Award for Operational Excellence from the Minister of Defence, Peter MacKay. In July, the American Congress followed by approving the awarding of the U. S. Congressional Gold Medal to the elite commando group. The group is now awaiting a date to receive the medal from President Obama. Although Hector says he is proud of the recognition, it is the camaraderie and friendships that is the glue that binds the veterans of the Devil’s Brigade together. Though their numbers are dwindling with age and health issues, they continue to meet regularly. I don’t recall Hector having actually talked about the war itself, but rather he talked about his comrades, where they were from, what they did, their health and how they related to one another.

When we are asked to remember Remembrance Day on November 14th, those of us who have not experienced the impact of war, felt the loss of someone we loved, lived with an injury, or became prisoners of memories that might haunt us until we die, we can only honour those who served and the many who died protecting us.

It took me over sixty-five years to learn, however, that each veteran has his or her own way of dealing with their experience. For some, it is silence, or humour. For others, it is explanation or camaraderie. Although they march collectively and share a common bond, their courage and bravery came as individuals. It is those individuals that we should honour equally.