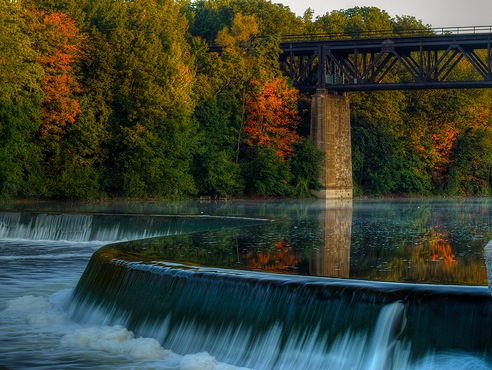 When I was growing up in Brantford, it seemed like few people were bold enough to publicly divulge their Grand River frolics. Whenever anyone did, it was rarely met with the approval I thought it should be. Why is that? Sure, some parts of the Grand aren’t exactly a babbling brook of crystal waters, but our distinguished watershed is a lot cleaner than many people think. It can also be a lot of fun. The next time you plan on taking a stroll along the trails, consider kicking your Grand experience up a notch. Here are seven ways to do it.

Swimming in the river is a clandestine but commonly executed pastime. It’s a blessing on hot summer days when your pals with a pool aren’t home. The best access points for swimming are located right off Gilkison St. at Clench Ave, or Tutela Heights road at Davern Rd. Just don’t touch the bottom with your bare feet if you’re squeamish.

You can fish just below the Highway 2 Bridge from Paris all the way up to the North boundary of the Brant Conservation area. Ready your barbless hook and artificial lure, though – this is a catch and release zone. For many reasons, most people wouldn’t dream of making maki out of the Grand’s slippery suckers, but you actually can eat fish from the river. If you’re hungry for some home-grown walleye, the Ministry of Environment’s Guide to Eating Ontario Sport Fish says it’s safe to consume up to 8 servings per month.

Perhaps the most widely enjoyed pastime along the Grand, biking, is a fun way to put those dusty paths to use. The trail I like best is the one that’s part of the Trans Canada Trail Network. This is the world’s longest network of leisure trails in Canada, stretching all the way from Vancouver to Tuktoyaktuk. Hit them with your set of wheels for a bi-coastal experience. Don’t forget your brain bucket.

If blazing the trails with a self-propelled device seems like a snore-fest, why not take a snowmobile for a spin? Feel free to rev your engine on any one of the four trails by the Grand; just watch out for cross country skiers.

Floating is the generic term I use to suggest the array of boating practices the River can accommodate. You might rent a kayak, a white water raft, or a ten man voyageur canoe. Park your car in Paris, rent a boat, float down the river with or without a guide, and end up in Brantford. Bring a cooler and some portable speakers and you have yourself a joyous afternoon.

Picnicking on one of the Grand River’s grassy knolls is a treat for the senses, not only because of the many scenic vistas, but also the many intriguing heritage plaques in the area. It is one of the few rivers in Canada with the designation “Heritage River,” after all. In any given spot you may decide to park to eat sandwiches, chances are, Paleo-Indian peoples were hunting mastodon and bison some 11,000 years ago. Pour out some lemonade for them on your next picnic.

Geocaching is a high tech treasure hunt that uses the real world as a playing field. The idea is that you have to find cleverly hidden “geocaches” stashed all over the world by its participants. There are lots down by the Grand. All you need to do is get the coordinates where they’re hidden (listed on geocaching.com). Geocaching etiquette requires that you put the cache back where you found it after signing the logbook and replacing the trinkets in the cache with new ones.