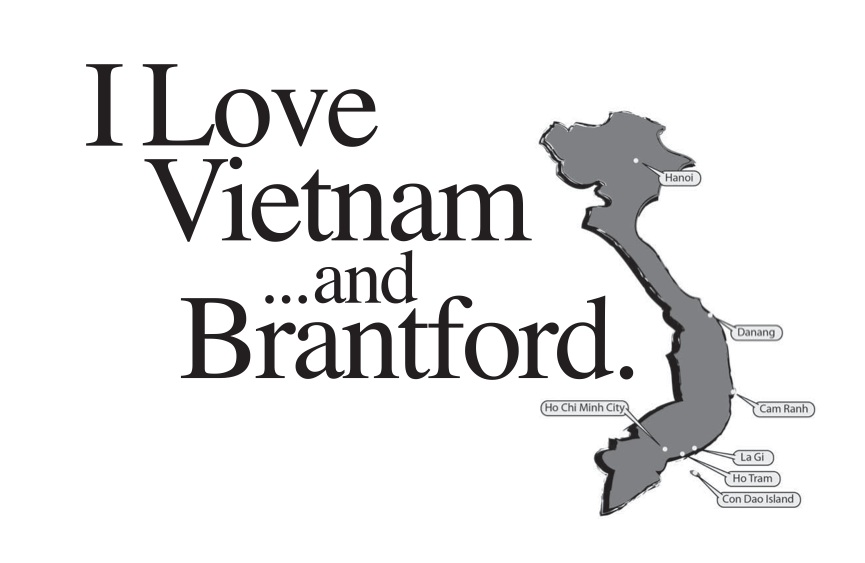 I left Canada in July of 2011 with my twin sister Amber. We planned to travel Europe for two and a half months and then move to Vietnam to live for awhile. Plans quickly changed when we arrived in Europe and found it SUPER expensive and could only afford to stay for a little over a month. We decided the best choice was to head to Asia a little earlier than planned. After a very long three weeks somewhat trapped in Bangkok (we love that city but one person can only eat so much street pad thai and look at the same dresses every day before it loses the allure) we were finally able to enter Vietnam.

Why Vietnam? Amber and I came three years ago to volunteer in an orphanage and we fell in love with the stunning children, the beautiful country and the delicious food. We rarely ever stick to travel plans, and after meeting the kids, the one month we had planned to stay quickly turned into two months plus a little tour of South East Asia. Amber returned the following year and volunteered for nine months, though she had only planned on staying five. While she was here she became such a part of the community and almost couldn’t bear to leave. I was jealous of her getting to see the kids every day, so we decided that we had to return again this year.

We had a lot of plans for what we would do while here – we needed to work if we were going to stay and volunteer with the kids long term. We had thought about opening a yogurt shop, working in a coffee shop, or selling pancakes – all our business plans involved comfy chairs and guitars lying around so we thought they were basically fool proof. Instead, we went for the easiest sounding option – opening a daycare center. Our business was extremely short-lived because we failed to consider how exhausting two-year-olds are, and how often they cry and pee their pants and throw up (disgusting!). We changed our plan and have found success over the past few months running three English classes a day. We do a class for little kids, one for children and teenagers, and one for adults. We are two of just a handful of foreigners in the city, and we run the only center with foreign teachers, so it is fair to say we are a pretty big deal here. People love the opportunity to learn English from anyone who speaks it as a first language. Though I never thought I would be teaching at a school I opened in rural Vietnam with my twin sister, I must say, I love this life. We have a blog for the school you can check out at: http://iwanttobeateacher.tumblr.com/ (we are looking for English teachers to come and help out – you can find more information on the site).

The reason we are in Vietnam is the kids at the or- phanage. They are as amazing as ever. There are 70 kids at the orphanage, ranging from newborn to 14-years-old. They are such happy and charming little children. Every time Amber and I go to see them they scream our names and run over to give us lots of hugs and kisses before we can even get inside the doors. They lovingly call us Auntie when they tell us all sorts of stories about their day, their school and the latest orphanage gossip. At some point every single time I visit, the kids will stroke my cheek and ask me why I can’t speak Vietnamese yet. Fail! (Just so you know it is super difficult – like super difficult!) I have loved spending the past six months with the kids and getting to be there for birthdays, Christmas, Tet, babies’ first steps, dance classes, little kids meltdowns and their happy days. It’s awesome!

So what’s it like living here? We are in such a rural area that a good majority of the people we meet have never seen a foreigner before, and because of this, we are treated like celebrities every single time we step out of our door. People yell at us all the time to ask us where we are from. We’ve also gotten more dinner invites, and even marriage proposals, than we can count. We constantly have our skin and hair stroked by random strangers, and I also have my slightly large nose pulled and pushed all over the place because it is so different then the tiny Asian nose. Like the majority of Vietnamese people, we don’t have a fridge or a washing machine; we have to hand wash our clothes in a bucket. Yes, it sucks, but we got used to it really quickly. Vietnamese people love Justin Bieber. I can’t even tell you how often I hear his song Baby in a day. Water buffalos walk down the main road at all times and cows graze on the grass in the median in front of our house, which will never stop being awesome.

I love Vietnam so much, and for the rest of my life I will constantly be returning. I have been to twelve countries so far but my favourite place in the world will always be Brantford. No other place in the world comes close to feeling as much like home. Brantford is such a friendly community with a family feel. It is full of people and places I love, mainly the Grand River, Harmony Square, Why Not City Missions, and just walking downtown. One of my favourite things is being able to say hello to everyone I pass because we all know each other. Brantford rocks and I am so excited to eventually come back and be immersed in all the wonderful parts of the city again.

One Reply to “I Love Vietnam…and Brantford – by Alisha Haugh”