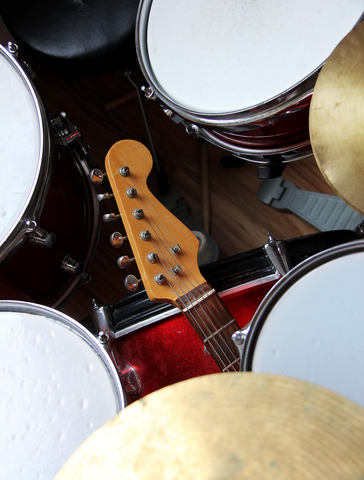 “Anyone look on stage for equipment we mighta missed?”

“OK yes, anyone do an idiot check “

“Yup… found a guitar player and a drummer “

It’s 3:15 am and the truck and the car pull out of a parking lot in Sudbury. They try to read the directions scribbled on the back of a coaster from the Queens or the Royal or the Arlington or whatever tavern or hotel the just played in all week. No G.P.S. No radio for that matter. Thankfully the heater works!

Hey Hey, My My, Rock and Roll Will Never Die – Neil Young

I’m a lucky guy. I’ve been a professional musician (yes drummers are musicians) for over thirty years. I caught the bug when I was real young, bought a pair of drumsticks from the Towers store in Brantford for 65 cents and beat on the old brown chair in the basement “playing” along to a 45 record of Ike and Tina Turner’s “ Proud Mary”. What started out as an outlet for hyperactivity became a serious hobby then a passionate career.

I even took my drums to university where I majored in chemical engineering. Strangely enough I spent more time working with bands then I did working with equations. So I transferred to Music College and started on the path I think I was meant to follow.
Years later I met Dianne through a musician friend. We became best friends then husband and wife then Mom and Dad. We have three kids, two which are awesome ( that’ll keep ʻem guessing ) and they all inherited the music bug. Like I said, I’m a lucky guy.
Our kids all listen to a lot of music so the house is a-rockinʼ constantly. So many great tunes are played in our home ( mainly because they play my old LPʼs … they have good taste ). Actually they’ve all found their own vibe and I hear a lot of cool new material.

Kellsie is our oldest and she plays guitar. She took to it quickly and worked out songs by the Beatles, Heart, the Police, etc. Her brother Cam figured he could put a groove to some of those so he started drumming. It didn’t take him long before he was jamming with Kellsie and not fighting with her ( or maybe they just couldn’t hear the yelling over the music). Their younger sister Tori has taken up piano and is learning her favourite songs. It’s a wonderful thing to hear the piano ring throughout the house when she plays.

The older two are in a band and have played many gigs, written songs and recorded a demo. When I see them on stage I remember exactly what that was like at their age. What a buzz. I envy them.

As any father of three teenagers will know, his opinion means about as much as having Leaf tickets at playoff time. But I thought I might offer them some wisdom and advice about being in a band because even they would agree that I may know something about it. So kids I decided to write a lyric/poem for you. Poems are a family tradition started by your Grampa who’d create hilarious and thoughtful rhymes for any occasion. Now you have to suffer through this one.

Being in a band is like being in a marriage, or a family or fraternity, So you need to always work together or one rehearsal seems like an eternity. The thrill and elation of playing on a stage can definitely be worth all the hassles, yet you’ll need a thick skin cuz you’ll hear ..” you suck! “ When you play for a bunch of … bad people. There are many benefits to learning an instrument, be it guitar or bass or keyboards. Many famous artists had whole careers playing only G, A and D chords! But always strive to improve your skills; it’s about the journey not the destination. Discipline, dedication, commitment, sacrifice, help you exceed your own expectations. You’ll learn life skills like organization, like diplomacy, and just getting along. You won’t laugh at bad band names or the lead singer’s wardrobe, and you’ll even let the drummer pick a song!?

A positive attitude is most important, find the bright side, and dare to take chances, play with lotsa new people, take any gig, even weddings or Mennonite dances. Listen to all genres, and keep an open mind, even old folks may impart some wisdom. Practice with you head but play with your heart, (and thank the “roadies” who lug the PA system). Take yourself seriously enough that you can laugh at a mistake, or at a bad choice. Only your own triumphs and your own imperfections will lead you to find your own voice. Being in a band is all of these things, but it’s more about the being than it is the band.

Play life with passion, every note and rhythm, the stage is yours to command!