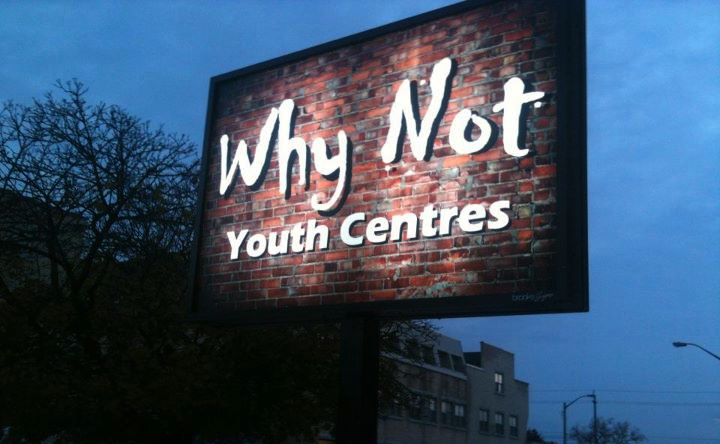 It’s 2 a.m. when he lays down his hammer. Aside from the scattered hubs of nightlife, the city is quiet. After the short drive home, he crawls into bed beside his wife and tries to sleep away the exhaustion. He’s not a big shot or a guy you see out much. He doesn’t have a fancy title or even income security. On the outside, he is a pretty regular man, but he is one of Brantford’s many superheroes.

For the last month, Trevor Beecraft, the regional director of Why Not City Missions, has been working feverishly to finish the renovations on Why Not Youth Centre’s new building on Colborne Street so that its services could resume.  It’s not glorious work by a long shot.

We don’t often juxtapose wrestling old beams and itchy pink insulation out of basements with the deeds of childhood favourites like Spiderman and Wolverine. Maybe it’s the fact that superheroes like Trevor wear ratty jeans and paint-splattered tees while on the job instead of fancy tights and cool capes. Or maybe, according to the less fun but more realistic argument, it’s because comic books simply aren’t written about guys like Trevor.

The fact is that comic books aren’t written about any of the Trevors out there—the teachers who go above and beyond, the leisure-sacrificing moms wanting to bring their kids up right, the jaded mentors, the volunteer coaches or the kids who take care of their grandmother’s property.

Comic books feature buffed up dudes in action at epic scenes getting wide attention that they usually claim to never have sought. But our heroes, the ones in our community who change lives, who change cities, don’t get credit. There’s no dazzling uniform, and no exclamation marks appear at the end of caps-locked sentences in bubbles beside snazzy caricatures on the pages of colourful leaflets. Nope. It’s working away in ratty old jeans to the tunes that screech from static-filled radios at two in the morning while nailing in baseboards.

And don’t get me wrong. Hats off to Captain Kindness for being such a nifty manifestation of proactivity in the Brant community. We all need reminders to show neighbourly love. I hope that kindness’s red and black mascot serves as a catalyst for the births of more and more inglorious heroes.

That said, there are an incredible number of people I’ve met during my years in Brantford who deserve to put the word hero on their resumes. I raise my battered green water bottle in their directions. Cheers to the selfless community advocates, the politicians and family folks, the idealistic youth and the hardworking adults. To the individuals and to groups, I pray that your efforts never become a reward-seeking endeavour, but that you continue to do things simply because they are good. Right now though, I present to you a sincere thank-you for the devotion you give to your causes. It was meeting people like you that had a huge impact on my life and the way I live it today. Don’t ever underestimate the value of your work.

Think about the people who have had profound impacts on your life. How many of them have you actually thanked? Chances are, a lot of people probably should have thanked you, even for doing tasks as tedious as nailing in baseboards.

Those of you who are Trevors out there, keep your figurative tights on, because you are making a world of difference.