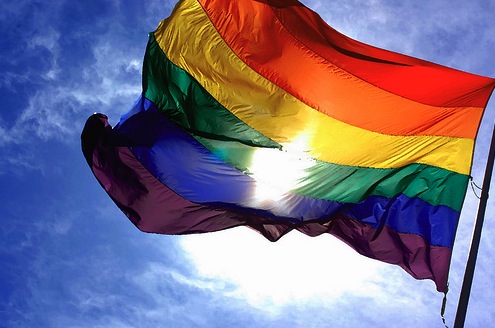 Pride is in the air.

What pride, you ask? The gay kind. Yes, gay pride. And I’m guilty of having it.

If you’ve been to a pride parade, you’d know there is usually a lot of bare skin, brazen statements, and free expression of sexuality. But that’s not what it is all about.

To me, having gay pride means you are proud of who you are as a homosexual person. It means you have embraced the part of yourself that society has looked upon as a disgrace or taboo. You’ve accepted the part of yourself that your family might hate or your friends might not understand. You’ve learned to love yourself. And yes, I, too, have become comfortable in my own skin. I can say without any fear that I am happy and proud to be a gay man. But that wasn’t always the case.

I believe people are born homosexual, or heterosexual, or bisexual, or asexual, or whichever-sexual you think you are. However, everyone discovers their sexuality at different rates. It’s never clear-cut at first. There are no flashing neon signs in your head that scream, “You’re gay! You’re gay!”

For eighteen years of my life I was never told that I could find my happily-ever-after within the same-sex. I was led to believe that girls were the only way to that path. It didn’t help that being raised a Baptist influenced this belief. The more I think about it, the more I realize there are many subtle pressures from peers, family – especially extended family members – and friends to have an interest in someone. Have you not noticed how often you are asked, “Do you have a girlfriend/boyfriend yet?” or “Are you crushing on someone?” Those kinds of questions encourage you to develop crushes, however feeble, in order to satisfy these interrogators. So I attended school like any other student and developed my crushes on the girls I liked as friends.

I could list off all the girls I crushed on, but I won’t. Why? Because I don’t believe any of them were ever truly a crush. Why? The thought of kissing any of them repulsed me. I just wanted to be their friend, that’s all. And frankly, I never thought about a girl in a sexual manner. It just didn’t happen.

And that rather scared me. What was wrong with me? Why couldn’t I talk about girls like the other guys my age did? I tried not to worry so much about it, tried to shrug it off. Until I developed my first guy crush. How could this even happen when I was a Bible-abiding Christian, you ask? Well, it happened.

I met him at work, we became fast friends, and we hung out regularly outside of work. I can’t explain what occurred, but something inside of me was strongly attracted to him. To his personality, to the way he smiled, to the way he made the hairs on my arm tingle with this newfound electricity. None of the girls I had crushed on previously made me feel the way he made me feel.

Around that same time, I was being prodded to ask my good gal pal on a date. Except, I didn’t have any desire to. Puzzled, I pondered to myself, “Why did I look forward to seeing this guy so much more than I did my gal pal?”

I knew gay people existed, obviously, but not in a million years did I think I could possibly be one of them. They chose to be gay…right? I was told it was a sinful choice. Right?! Wrong!

That doesn’t mean I wanted to become a gay guy. I didn’t want that title. As a Christian, I knew what the religious members of our society thought about gays. The people in my youth group either balked or mocked the idea of homosexuals. The pastors would preach that all gay people would surely go to hell. And I only assumed that my parents and family would think the same way. I didn’t want to be alone.

So the battle in my head ensued… for a long time. My desire to appease the people around me and live the godly life I should live – versus – the way I secretly feel about this guy and how I’m discovering my intense attraction to men over women.

For anyone who has experienced, or is experiencing, a conflicting madness similar to this, let me tell you how much easier it becomes when you confide in someone to talk things over. You’re able to vocalize the racing thoughts that have been driving you crazy, reveal your fears, and hear a different perspective from your own. I call this sharing process: normalizing the situation. Once you confide in that first person, you feel such a weight lifted from your spirit. Even more so when they are so supportive of you and want the best for you. After I was able to normalize my situation, I was closer to knowing what was best for me. My same-sex attraction was real, not a phase. This self-discovery opened my eyes to so much, and made me feel like I had been living such a sheltered and naïve life (granted, I had been). I needed to live my life for me. It was my happiness on the line. I wasn’t about to sacrifice my feelings to please the other people around me.

With my blinders off, I made my next move. I came out of the closet to my closest friends and planned on how I was going to tell my parents. I know some people wait until they have a significant other before telling their families, but I couldn’t. I knew shit might hit the fan and I needed to deal with it before I dragged a potential boyfriend through such a mess.
Telling your parents that you are gay can be one of the hardest things you can do. They’ve raised you, they have dreams for you, and they love you. You are their precious baby. That’s why being rejected by them can be so dreadfully horrible. So naturally, the biggest fear I had was this rejection.

But I got lucky. Sure, my mom’s initial reaction was religiously laden and not to my liking, but over the past five years, things have improved tremendously between us. Time really does heal. My dad and step-mom took the news in stride and we now talk freely about my boyfriend. I have him over often and my parents treat him with kindness and respect. As for my younger brother, he’s been the coolest broski through the whole thing. Suffice it to say, I stopped attending church. I didn’t need to go to a place where I felt I was being judged by hypocrites. I also didn’t need any help getting fixed from my sinful lifestyle, but that talk is for another time.

Nor did I find myself alone when I came out. Granted, coming out shut a lot of doors for me, but it also opened twice as many more. With the help of some amazingly supportive friends, I’ve been able to reach the point of where I am today. A proud homosexual.

If there’s any advice I can give to someone struggling with their sexual identity, I urge you to talk someone you trust about it. You need to talk it out and normalize the situation. And my advice for someone who suspects their friend is homosexual or bisexual, do not confront them about it as they may not be comfortable with themselves yet. Instead, make sure you casually let them know you are there for them and let it be known that you support LGBT people. As for the rest of you, my advice is to continue to have an open mind about people’s backgrounds and sexuality. I do have a blog where I share more of my thoughts on different topics. Among all the randomness, there are some posts that are gay-specific, so feel free to browse at www.schnippits.wordpress.com.

Keep your chin up and be proud of who you are!