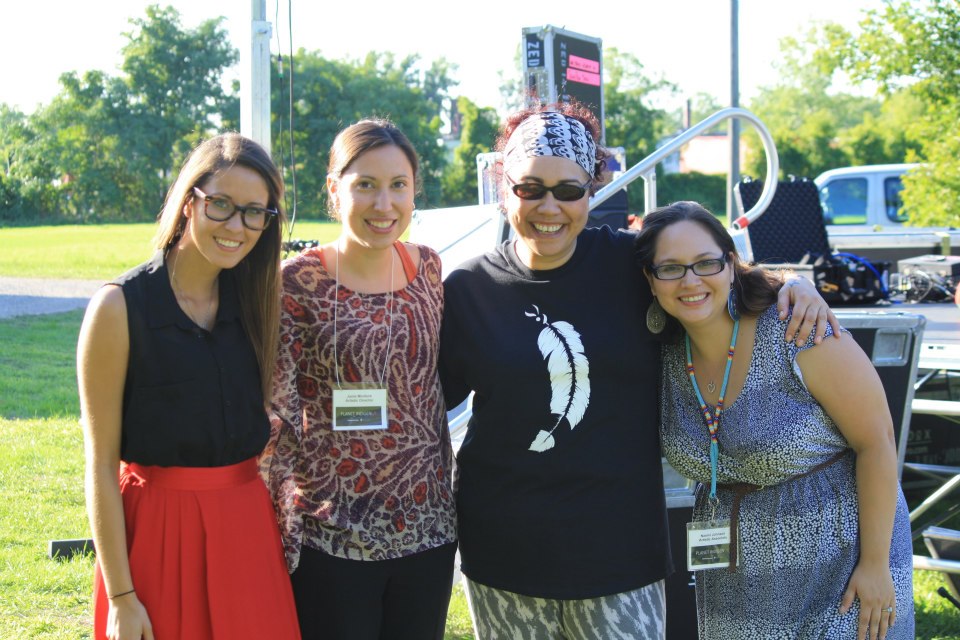 Hi, my name is Carley Gallant, I live in Brantford, I’m a second year Visual and Creative Arts student at Sheridan College in Oakville and I am a summer student at Woodland Cultural Centre.

I have one foot on the reserve and one foot in Brantford.  My mother is Cayuga Nation from Six Nations of the Grand River Territory and my dad’s family is from Nova Scotia, most of who now live here in Brantford. I’ve always known that I am native but I have never practiced any cultural traditions. I never realized just how important learning about your culture was until I started working at Woodland Cultural Center for Planet IndigenUS.

Planet IndigenUS is one of the largest international Aboriginal Arts Festival, ranging from visual arts, music, performing arts, dance, and culinary. I started in June 2012 as the programming assistant, and spent 2 months preparing for the festival.

During this 9-day festival I got to meet and get to know some amazing artists.  All of which knew their language and knew the meaning and stories behind their traditional dance, songs and art.

I have one foot on the reserve and one foot in Brantford.  My mother is Cayuga Nation from Six Nations of the Grand River Territory and my dad’s family is from Nova Scotia.

A group called Goombine, a descendant of the Wadi Wadi people from Australia, taught me how to throw the boomerang. On this same day I met a band that blends modern punk, folk, rock and traditional Mongolian music from China, Hanggai. They couldn’t speak any English, but this didn’t stop them from sharing their love of music with Goombine. Goombine taught Hanggai how to play the didgeridoo and in return Hanggai taught them how to say some words in their aboriginal language. It was as if there was no language barrier even though neither could speak each other’s language. Hanggai brought an interpreter but they didn’t even need her.  Their love of music needed no interpretation.

I met Charles Koroneho, from New Zealand. I participated in his Te Pou Rahui Performance workshop and learned some traditional Maori dance moves. I had a chance to talk to him afterwards and I was so captivated by his passion and knowledge of his aboriginal heritage. This is when I realized I didn’t know enough about my own culture. I couldn’t answer his questions.  I felt like I needed to take the time to get to know who I am and where I come from better.

I attended the play Salt Baby written by Falon Johnson, which explores the issues of what it’s like to be a contemporary First Nations person growing up not looking like your typical “Indian.” As I watched it I thought to myself, “I’m a salt baby!”  The character in the play took a journey of self-discovery of what it means to be Native. It was an awakening for me and I knew that it was time for me to make this same journey. Then I realized that I had already begun this journey by coming to Woodland Cultural Center and putting both feet in.