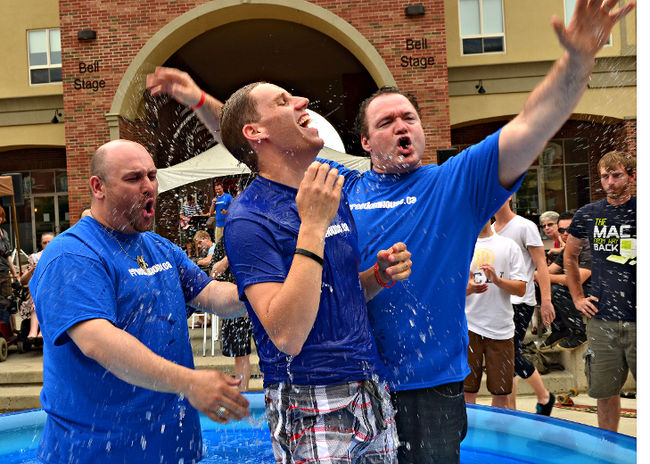 My whole life is defined through music. I can take you back to almost any season in my life and tell you what song was significant for me at that time. Three summers ago the song was God Is Great, Beer Is Good, People Are Crazy. That wasn’t a good season.

I suppose I should explain a bit. My name is Brian Beattie and I’m a music junky. I’m a husband, a father, a leader, a business man, a pastor and a music junky. For the record, I’m not writing to advocate for alcohol or against crazy people, but for music.

Lately, I have spent a lot of time with my boys and their band Incentive. I find myself living out some of my teenage dreams vicariously through them, as I drive them from gig to gig. These guys are incredibly talented and will make far more of their music than I ever did.

Jeff Foxworthy says you may be a Redneck if the directions to your house include the phrase, “turn off the paved road.” Now, I wouldn’t call my family rednecks, but people who have visited our family home have made the case. We definitely lived “off the paved road.”

As the youngest kid in a family of seven, I was raised on heavy doses of country music; I mean, heavy doses. Johnny Cash, Dolly Parton, Loretta Lynn and Tom T. Hall. Even today, I may not be able to remember someone’s name that I met yesterday, but I can’t forget words to obscure old songs like A Boy named Sue, or The Year that Clayton Delaney Died. I used to spend countless hours sitting beside my parents record player, learning the words to these songs, and learning how to play acoustic and bass guitar along with them.

My teenage years were filled with the music of Andre Crouche. I had never heard christian music before, but the guy who picked us up for the church youth group I’d joined, played an old eight-track of Andre Crouch and the Disciples, Live from Carnegie Hall, every week. Songs like, Jesus is the Answer, and He looked Beyond My Faults (and saw my needs), still have powerful, emotional connections to me.

In my late teen years, a friend and I memorized an entire album of The Statler Brothers and dreamed of becoming singers and travelling the world.

Then, there was that one summer, during my bible college training, where a buddy and I worked as lumberjacks in Northern Ontario to help his brother-in-law plant a church. I still laugh when I tell the story of how I was threatened with death by a drunken lumberjack. Music helped me get through that summer alive.

Through the years, I have gained an appreciation for many different styles of music, all playing a significant part, both in my past and in my present.

So, why am I telling you all this? Why do you want to hear my trip down memory lane? Let me make a couple quick and easy applications. Some reading this article are wondering if they’ll ever be free of the emotional or relational struggle they feel bound by. Let’s face it, life gets crazy sometimes. I remember talking to my sister when she was in the midst of a challenging time in her life, during which we both shared a mutual admiration for the Tim McGraw song Live Like you were Dying. It became a source of inspiration for both of us.

Others are wondering when God is going to answer that prayer they’ve brought to him, more times than they care to remember. To you, I submit the words of The Gaither Vocal Band song, Give Up: “Now if you got burden’s too hard to bear/ Oh, and if your load is more than your share/ Kneel, kneel down, talk to Jesus because I, I know and I know He cares/And He’ll, He’ll make a way, make a way for us somehow.”

Whatever you are facing, try this, find the truth in a song that has brought meaning and purpose into your life, and allow the words to come alive for you again. I don’t care if it’s country, gospel, rock, classical or Zamphir and his pan flute, there is something powerful about music that can remarkably change the course of a day. Here’s a hint for you that works for me, I have found the greater the challenge, the greater the need for increased volume.

So, don’t let circumstances or bumps along the road of life steal your passion. Turn up the radio, crank up your Ipod, and join in on a song that elevates you above whatever is trying to hold you down. And, if you need a little help finding a song, you can sing along with me about how God is great, with or without the beer and the crazy people.