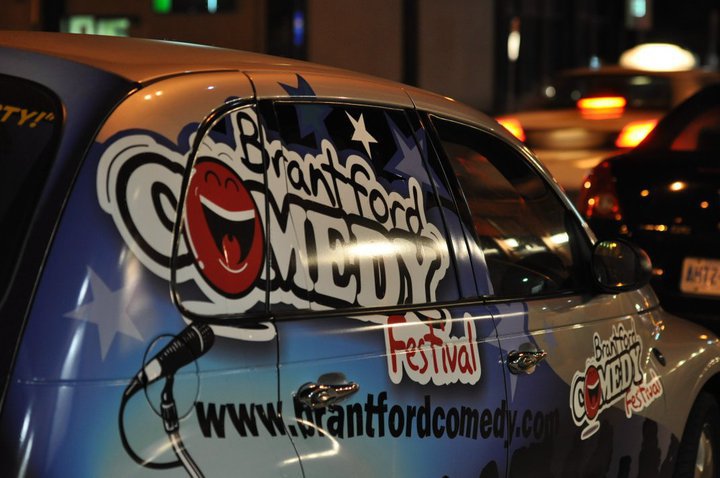 My name is Jamie Stephens, and I’m an event-oholic.  Don’t worry if you haven’t heard that term before, because I just made it up. Event planning is my poison (that’s a fancy term for drink, for you non-alcoholics out there). I literally get a high from putting on events.

You may know me from such events as Brantford Barks, Grandelicious Food & Wine Show (co-creator, with my friend Trevor Cherewka), Those Damn Divas and my flagship event – The Brantford Comedy Festival.  I’ve also done a lot of one off shows that brought Pauly Shore, Nikki Payne & Brent Butt to Brantford.

“There’s nothing to do in Brantford”.  That phrase makes my blood boil.  In fact, I can say in all honesty that it pisses me off, more so these days because there is a lot of a stuff going on in Brantford.  In fact, that phrase made me so upset, that it was the basis of starting my business. My first comedy show was 80 people at the Polish Hall on the corner of Pearl Street.  I had interviewed comedian Darren Frost for a magazine I ran locally, and he said, “We should do a show.  I’ll bring the comics, you sell the tickets”.  Looking back now, I’d die if only 80 people came to a show – but that night, sitting in the crowd and watching people around me laughing and having fun, I was hooked. I kept doing more and more shows, forming relationships with our local media, building my contact list in the industry and many trips to Toronto to watch comedy.  I’ve easily seen over 1,000 hours of live comedy, not all of it good.

I gave Graham Chittenden his first “real” show in Brantford, playing to 350 people at the Quality Inn and opening for Debra DiGiovanni. Now, Graham just filmed a set for Just For Laughs. It’s a lot of fun watching these guys grow, and working with the true rising stars of the comedy industry.  I don’t take any credit for anybody’s success. For me, it’s fun picking the guys who I think will make it big and bringing them to Brantford before they do. I’ve also met and worked with a lot of utility comics. Just like professional hockey players, these are the guys that kill it every single night, but just can’t seem to break out of the minors and make it to the big leagues.  The comedy world is much like the music industry in the sense that it can make you or break you.

I’m often asked “why comedy?” Well as cliche as it sounds, laughter really is the best medicine, and I love bringing the funny to Brantford, because we all know that we need the laughs. I won’t lie to you, my experiences in the event industry has attracted some interest in other markets. The big bright lights of Toronto or Kitchener/Waterloo often call my name, but something keeps me in Brantford.  I honestly feel that this city needs to laugh, and I’ve decided to appoint myself as the guy who will bring the laughter to Brantford.

Without getting political, it’s pretty easy to see that people are losing jobs here, as more and more industries pack up and leave town.  The economy isn’t the greatest.  I’m being asked for change from random people on the street, and a recent visit to the Social Services building, as well as working closely with the Brantford Food Bank have been a real eye opener to just how badly we need the laughter in this city.

People, who know me, know that I love Brantford. However, we do fight from time to time.  Being an event promoter in Brantford isn’t always easy.  There is a formula, it goes something like this:  Talent + Timing + Affordable Tickets = Potentially Successful Show.  Notice the word potentially, because doing events in Brantford is never a guaranteed success. I’ve been pretty lucky, but I’ve watched a lot of ambitious promoters fall to the wayside.  Oh, and Brantford loves to wait to the very last minute to purchase tickets.  Case in point, we had 4,300 buy tickets at the door for our first annual Grandelicious show.  4,300 people! Do you realize that I didn’t sleep for a week?  We average 100 walkups for the Brantford Comedy Festival too, which blows me away, because the line up every year has been bigger and better, but hey… it’s Brantford and I’ve learned to accept that we’re just laid back that way.

Here’s the deal. As a business, of course I have to make sure that my costs are covered and that I’m putting in all the work and I’m able to pay my bills at the end of the day – but putting aside all of the boring business stuff, it’s the feeling of getting on that stage and introducing a show to a packed room, that’s what drives me to keep doing this.  It’s the smiles; the laughs and the people talking about the show with a big smile weeks after it’s over.  That is why I do what I do. You should have seen the look on some people’s faces when I told them I was going to do a Comedy Festival in Brantford.  “That’ll never fly”, “You’re crazy” and “Brantford?” were some of the responses I received.   That’s what makes it even sweeter when I go up on stage this year and say, “Welcome to the 3rd Annual Brantford Comedy Festival”

I dream of a day that I walk up to my own show, and somebody is standing outside offering to sell me a ticket to the show because it’s sold out.  I’ve always said that when that day happens, I will buy that ticket and frame it on my wall.  I will not stop until that day happens, and then… I will set a new goal.

One Reply to “Living in a City that Needs to Laugh (Jamie Stephens, @BrantfordComedy)”