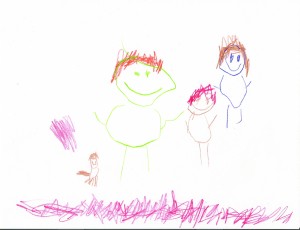 Paul MacGilvaray, the older brother of Laurier Brantford student Megan Clayborne, is someone who lives a very different life from most. At first glance, many have assumed his quality of life is bad. To truly be able to measure the quality of life in definition depends on the degree of excellence within it; something you cannot tell by first glance.

Paul’s family describes him as happy, delightful, upbeat, optimistic, loving, engaging and the list goes on. There are nothing but proud, defined grins on his parents’ faces when they talk about him. For them it is easy, but Megan has a harder time finding the words. “Paul’s not only my brother, but my best friend,” Megan says. The rest of the family all acknowledge his and Megan’s special connection, and tell of how she understands him better than anyone.

Paul officially joined the Clayborne family at the age of 31, the same year that Megan was born. It was June 30, 1994. Paul’s newly adoptive parents, Linda and Kevin, already had a daughter of two named Mallory, and Paul’s best-friend-to-be joined the family late that November.

Paul was born with Down syndrome on August 14, 1962, and was put up for adoption at birth. The Down Syndrome Research Foundation describes this disability to be a “genetic condition caused by an extra chromosome.” This extra chromosome causes developmental delays, learning disabilities and health problems due to cellular changes.

By the time Paul was a year old, he found his first home at The Robertmack Home for Retarded Children, where he resided until he became a part of the Clayborne family.

During his stay at The Robertmack Home, Paul had a terrible accident. A friend dropped a piece of paper that flew out into the street and Paul followed it to lend a helping hand, as he always does. He was hit by a Hamilton Street Railway (HSR) city bus and, luckily, survived. The right side of his body was paralyzed, and he would never walk again. At the age of only 16, Paul was to continue the rest of his life in a wheelchair, but went on living and loving without complaint.

Linda worked with Paul at The Robertmack Home from the age of 13 until she was 20. Fifteen years after she left, Kevin received a job there as well. Within six weeks of Kevin’s employment, the owner passed away.

Initially, The Robertmack Home was for children, but by this time all of the occupants were well into their adulthood; they were no longer eligible for group homes. Everyone was to be put in to long-term care facilities. That was when Kevin and Linda jumped in. They decided to adopt Paul so he could live a normal, fulfilling life within a family. Kevin explains that he “took a real shining to him, he was just a great guy.”

Only one year later, Paul began to experience severe neck and head pains, as well as loss of balance. They took him to a doctor, who did X-rays and referred the family to a specialist. It seemed that his vertebrae were pressing against his spine; a common health issue with people who have Down syndrome, but the bus accident surely contributed to its severity. The doctor gave Paul about three weeks to live without the thought of any treatments. Kevin and Linda desperately asked what could be done, and the doctor told them that there was no point in going further with his “quality of life.”

Kevin and Linda’s voices hasten and their faces begin to flush as they explain how furious they were with that doctor. They asked him many questions revolving around how he could possibly know about Paul’s quality of life without being a part of it. Reluctantly, the doctor scheduled Paul’s cervical spinal fusion surgery. Paul lived on happily with his quality of life and was no longer in pain.

Linda explains how the family is centered around Paul. They do not have the opportunity to do spur of the moment activities; things always have to be planned around Paul’s accommodations. However, they do not see this as a hassle, just their way of life. Besides, he loves the attention.

During the interview, Paul hushes us all as if he’s about to say something incredibly important. After a moment of silence, he begins to sing. Instantly the room is full of laughter; something Paul does effortlessly.

In October of 2009, Paul’s health began to spiral down once again. He was drastically losing weight, noticeably having stomach pains and suffering from constipation. With each hospital visit Paul was sent on his way with laxatives that did not help. It came to the point that Linda and Kevin refused to take him home until something was done. The doctors admitted that they did not want to be stuck with a “housing problem”; they were afraid Linda and Kevin were going to leave Paul there and never come back. After reassuring the doctor that Paul had a family and home, ultrasounds were finally taken.

Paul was admitted to the hospital at 7 a.m., and the call was made to the family at 4 p.m. the same day. Paul had a cancerous tumor in his abdominal cavity.

The family was devastated. As they were breaking down and barely holding on, Paul was still smiling. He would refuse to admit that he was in pain, although they could all see it in his eyes. The options were minimal. Either Paul went through with surgery to have the tumor removed at only a 10 per cent chance of surviving, or he had a meager four weeks to live.

The family decided on the surgery. They did not want him to go on suffering any longer. Linda’s eyes begin to water as her voice crackles out, “We all said good-bye that morning because we didn’t know if he was going to make it.”

The tumor was removed at 17 lb. and Paul instantly went into cardiac arrest. With only a few scares since, Paul’s will to live prevailed yet again.

Megan finds the words to explain that, “No matter how many people told him things were looking bad for him, that there wasn’t much to look forward to, he always looked for that little something and held onto it.”

Paul has been cancer-free for four years now. After those long seven months in the hospital, he lives happily back at home in Hamilton with Linda, Kevin, Mallory and their dogs, Buddy and Sophie. This is his first year living without Megan and he is by no means used to it considering they’ve been together for almost 19 years. He tells Megan that he is coming to live with her in Brantford just about every time he sees her. Megan smiles as she teases, “You can’t live with me! Where would you sleep?” He disregards her excuses and insists on it anyway.

Paul is continuously happy; he has the desire to always put others before himself. He never looks at the negative side of things and always knows how to cheer people up. “Because of him I have true compassion,” Mallory admits. We ask Paul how he cheers Megan up when she is down. Paul motions her over with his left hand, takes her in a big bear hug and kisses her cheek. As Megan walks back to her seat, Paul blows her a kiss and shines his big smile.

Even with all the tragedy thrown at Paul, a smile is his answer. Why is he always so happy?