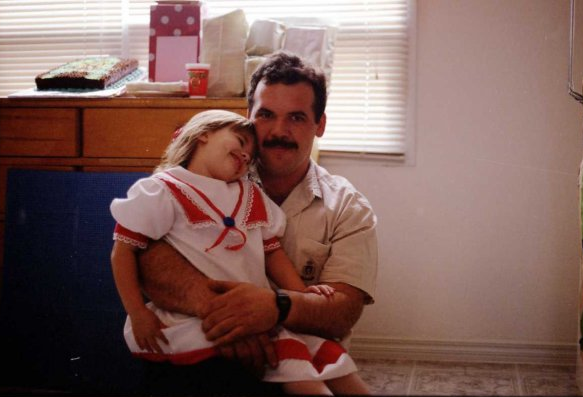 I would like to put out there an argument you may have heard before, but dismissed as antiquated and sexist. The logic of the idea is, I think, very sound, but when you start to talk about gender roles in today’s society you can run into a lot of high-minded, well-meaning, but ignorant people. When it comes to child care and the role of nurturer and parent in the home the choice for which sex is best for the job is obvious and determined by nature.

Now before you get all huffy about rights and progress and everything else, let me clarify why I believe this is true. No one can say that the default temperament of a man is not closest to that of a child. Men are nonsensical, silly, puerile, irreverent, and prone to making fart jokes – like children. Women, by contrast, are refined and polite, efficient and business-like. Such traits, while effective in the working world, are less than useless when the task at hand is reciting the alphabet in burps. When you need to help make an artistic statement on the kitchen floor in tomato sauce and granola, no one cares where you got your MBA. While a man may, for a time, be able to tamp down his inclination toward mayhem and mess to fit in with the suits and pencil pushers, it’s like when Superman lost his powers and had to be Clark Kent all the time. It’s not right, and sooner or later he’s going to want to smash stuff.

And who in the world would want to stop him?

For another point, the Hulk would be a more fitting example. Taking care of children is an incredibly physical task, as you know if you have ever carried a filthy squirming toddler and toys and groceries and spare wipes and diapers, it’s like being in a rodeo except with more dirt and bucking. The fairer sex just doesn’t have the upper body strength. Women are more suited to the rigors of a boardroom than a playroom. A woman’s body is not built for the demands of child rearing any more than a man’s muscles are required in an accountant’s office. As Seinfeld’s Elaine says: “The female body is a work of art. The male body is utilitarian. It’s for gettin’ around. It’s like a Jeep.” And when you want to get around, a jeep is what to have.

Also, children need to be in the outdoors, to get dirty and bump their knees, to throw rocks in the creek and blow the fluff off dandelions. They want to pick up bugs and roll down hills and get weird things caught in their hair. Does any of that sound like the kinds of things most women want to do? Since I cannot hear you I will conveniently assume your answer is no. Women are clean and tidy, eschewing bugs in favour of chewable vitamins; rubbing hand sanitizer on themselves instead of mud. A woman’s manicured fingernails are made to be perusing a financial statement, not poking under rocks to see if salamanders come out.

Ladies, how many times have you told your male counterpart to stop screwing around and acting like a child? There is a reason for him to be like this and it is part of a grander plan. Sun Tzu said in The Art Of War, “To understand a child, one must be like a child.” And even if he didn’t,* it would still be so true that he might as well have. Sometimes there is a snark hunt scheduled to run through lunchtime and if we came in and had our grilled cheeses and juice now then they’d get away. A woman’s sense of order and responsibility would never allow such an event to transpire. But a man’s very lack of  sense is what makes him such a good caregiver; being late for lunch will not harm you, but once the snarks know that they have free rein then the whole neighborhood is finished.

Sadly, many misandrists still to this day try to cling to their Neanderthal nonsense that a woman’s place is in the home and that females in the workplace is a bane on society.  Imagine what would happen if this were followed to its logical conclusion. Men being in charge of politics would make it a banal and infantile game of one-upsmanship and posing like a kindergarten popularity contest. If men were at the tops of financial companies then they would probably just ruin the economies of the world with stock-price manipulation and hare-brained securities-packaging schemes and cause recession after recession with their risky childish games more suited to the playground. If all the army generals were male then they would most likely invade other countries like a three-year-old grabs his playmate’s toy, unmindful of the hurt feelings and other collateral damages. I shudder to think of a world in which these things could happen.

Like the noble emperor penguin, the male should be sitting on the eggs while the female is out catching fish. It may not be fair, but I’ll say it: A woman belongs out at work while the man is at home raising the children. As nature intended.