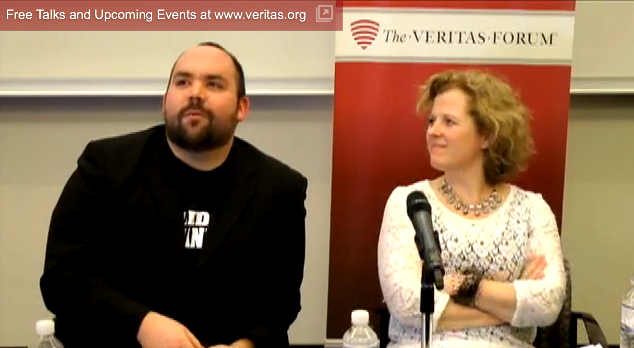 Click here to watch the 2013 Veritas Forum from Brantford, Ontario.

Recently I was asked to speak at the Veritas Forum at Laurier Brantford. This forum is part of a network of forums hosted in Universities across the globe. They’re designed to create discussion about the role of religion and faith in communities. This year’s forum was specifically designed to look at the role of faith communities as they relate to social justice. As our host for the evening Rick Gamble pointed out, the evening was designed to help build bridges.

I shared the stage with some pretty remarkable people like Charlie Kopczyk (Why Not City Missions), Dr. Robert Faegan (Laurier Brantford), and Dr. Anne Marie Zajdlik (The Masai Centre for Local, Regional and Global Health/Bracelets of Hope). The question we were to answer that evening was, “how can people of varied beliefs move forward together to work for justice in our world?”

I spoke and was grateful for the opportunity to share in the evening. Since then I have thought more about where social justice and faith communities intersect: For me it started when I was growing up.

As a kid in Eagle Place, I was a part of Our Lady of Fatima Church. During my confirmation process, my community service was teaching Sunday School at the church. This was in Grade eight, making me perhaps the youngest Sunday school teacher in the area. I learned a lot from Father James Mihm during that time. The best learning happened when I heard him helping congregants after mass. People would come to Father Mihm with a variety of issues, from the personal to the systemic.

In catholic high school I became more aware of social justice, activism and ways to organize, but in university it almost completely passed me by. I went to university in Ottawa, the hub of political activity in this country, where major protests happened regularly, but I didn’t attend one. I just didn’t connect with any of the movements that were there. I still have the Noam Chomsky and Naomi Klein books I was supposed to read for my classes, but didn’t.

Luckily I joined a debate team. In these staged arguments, we were forced to defend positions we often didn’t agree with because we were randomly cast into that role. I recommend this, for understanding the thoughts of other people. These experiences allowed for me to not just fall into a mindset but instead to test my thoughts, to ask questions, to ponder all sides of an issue with others who were interested in doing the same. If you’re trying to build bridges this sort of exercise is so incredibly helpful.

Now as a social worker, I get to work on social justice issues like oppression, mental health stigma, youth issues, senior abuse, indigenous rights, poverty and their effects on systems. I’ve been able to see how people from various faith communities and people who have no faith background can work together on social justice issues in a collaborative way.

Our community is full of people who exemplify this: Jonathan Massimi, my paisan, who literally stays up at night thinking about ways he can affect neighbourhood change in a neighbourhood that needs it. He’s very much opened my eyes as to how faith communities can contribute to social justice causes.

Dave Carrol and Brian Beattie also write often for the Brant Advocate about their adventures on the front line of a downtown church, and how that experience can be transformational.

Charlie and Sue Kopczyk, along with Trevor and Amy Beecraft, whose work I’ve seen the benefit of first hand, as I’ve spent a many a night at Why Not Youth Centres.

I’ve watched retired Rev. Randy Mackenzie organize his congregants to help others and I see the folks at Heritage United still working diligently in the same vein.

My friends at the Salvation Army, who I’ve been involved with for years on food drives and red kettle campaigns, also do the front line work many others can’t or won’t.

The Sikh Association of Brantford is so welcoming and interested in taking care of those in need. At the Veritas forum I wore a shirt that said “I Pledge Humanity,” which I received at an event held at the local Gurudwara. The conversations I have had with members of that community around health, leadership, and the moral imperative to help those who need, are inspiring.

The Muslim community in Brant who are at the front line of many local and international social justice issues, are another great example. Mohammed El-Farram and many others from this community have done great advocacy work and have helped to build bridges through education between communities.

My friends who live in Native Spirituality, I see them often working to help others, to heal, to educate, and to work past oppression and ignorance.

Rev Cathy Diltz has gone above and beyond in this community to take a stand to say that the LGBT community is welcome. I’ll be forever changed by the non-denominational service they had before the Pride Walk last year. Members of the LGBT community had tears streaming down their face, as they were asked to come and receive bread and were accepted into the church. For many of them religion was a part of their life that they valued but for so long was closed off to them, just for being who they are.

As a social worker I see the practical supports that religious communities offer in food, housing, and financial help for those in need. I’ve also been able to see, for many of my clients, that religious communities have offered them a place where they are welcome and accepted. For those who find faith to be something that fits their lives, I have seen the less practical but no less important need for belonging, emotional support and friendship met by local communities of faith.

We’re very lucky. For all the faith communities I’ve listed there are literally dozens more locally who do similar work. Often these faith communities work together with the greater community, on boards and projects of interest to us all. Again, the question we were to answer at The Veritas Forum was, “how can people of varied beliefs move forward together to work for justice in our world?” Having thought about it some more, I think the answer is actually pretty simple: Do what we already do in Brantford.