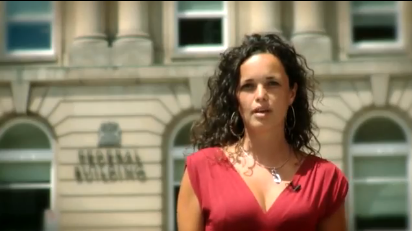 Engaging in community work directed at creating change can be heavy and dark. You need to know issues in order to work towards making any type of difference, which often means learning about statistics and hearing stories full of hurt and desperation. There is often not a lot of room for light heartedness because you fill your breaks with moments to breathe, and ponder, and hope you don’t get paralyzed by the immense size of the issue.

Emma Goldman changed my perspective. I read a quote from her one day when writing a history paper, and I realized that for a long time the women’s movement had been taking a problematic approach to the issue of violence, which led it to lose people or keep people out of our struggle. Oddly enough, I discovered this quote at the same time that a shift happened in the movement.

In the early part of the 20th Century, Emma Goldman worked strongly within the labour movement. She believed in the power organized workers had to create real, lasting change in society and to cause upheaval to the power imbalances that existed. But she also believed that as hard as we work in the struggle to create change, we also have to recognize every chance we get to celebrate our hard work, and all the changes that have already happened in order to keep up the energy. We need balance. She said, “If I can’t dance, I don’t want to be part of your Revolution.”

As I said above, this totally spun my head around and made me rethink my own work. Too much time, though it was needed, was being spent on raising awareness, talking in meetings, lobbying politicians, protesting in the streets, holding vigils and volunteering at front line services.There weren’t enough celebrations. It was so heavy. There was no balance.

People became lost in the movement – burnt out. People felt excluded. Some were reluctant to become involved because of the nature of the work. It felt exclusionary and serious. There was no room for men to engage in movements for change. It was easy for politicians to silence the movement and label it as a special interest group because it was only women talking about violence. The movement was losing a lot of power, and the energy that existed was being used to maintain existing services or engagements. Its movement forward was coming to a halt.
Then the Vagina Monologues came out in the late 90s. I feel like it was at the exact moment I was writing my paper on Emma Goldman. This was a play written by a survivor of sexual abuse, Eve Ensler, who was saying it’s not enough to bring the grim ugly reality of violence to the eyes of the world like we had been doing for so long. We needed to celebrate being women, being human and being agents of change. And that we must do this as a whole community and not just burden women with the task of ending violence against women.

I was involved with several productions at McMaster and at the Sanderson Centre and have attended the ones by my local women’s shelter. All the productions have been unique, but there is a commonality. It’s a great opportunity to bring a difficult issue to light, but also to celebrate our accomplishments and resilience, and to raise money for local front line services.

Ensler declared Febraury 14 to be an international day of action against violence against women. This year, in the true spirit of Emma Goldman, Ensler organized a global flash mob called 1 Billion Rising.

The Sexual Assault Centre and Brantford Native Housing organized our local dance with CORE studio, based out of Paris. We were hosted by the Arts Block in their beautiful new space.

It was an energy filled hour of laughter, tears, stories and celebration. It was very empowering for some, and very rewarding for all of us. It was a moment to step back and recognize that even though there is a lot of work to be done, we have already done so much. The dance energized our work.

Violence against men does exist, but this day was about violence perpetrated against women. We called on men to join us and to be part of the struggle and celebration. Brothers from our community did join us and they did dance and share hugs and stories. They know one out of three women will be raped in their lifetime. This is a sad reality that must be ended. More work needs to be done towards ending the fact that one man out of six is sexually abused.

1 Billion Rising took place in over two hundred countries with hundreds of locations within each one. Many took place in malls and parks, with some interesting exceptions like the European Parliament or a series of jails in California. Our own 1 Billion Rising took a journey to the office of our provincial funding partner to perform the dance for them right in their office. The messages people shared with us on Thursday at our event were about resilience, celebration and the need to keep moving forward to end violence.

I am not attempting to credit the Vagina Monologues with reinvigorating the violence against women movement. I feel that in all histories there are pivotal moments that create waves and ripples that affect change. It is difficult to keep an issue palpable without minimizing it, or silencing people’s experiences. The Monologues inspired new ways of discussing and engaging the issue of violence, and creating new ways that were more welcoming and celebratory while still being somber and serious, opening up new spaces for conversations and action. I saw that over a century later, the words of Emma Goldman were true. In life you need balance. We need both sides of the issue. We need the struggle and we need the celebration in order to move forward and in order to make a change. 1 Billion Rising was important because it provided an opportunity for balance, and for global recognition of violence. Whether you are an activist, a survivor, or both, you know you are not alone.