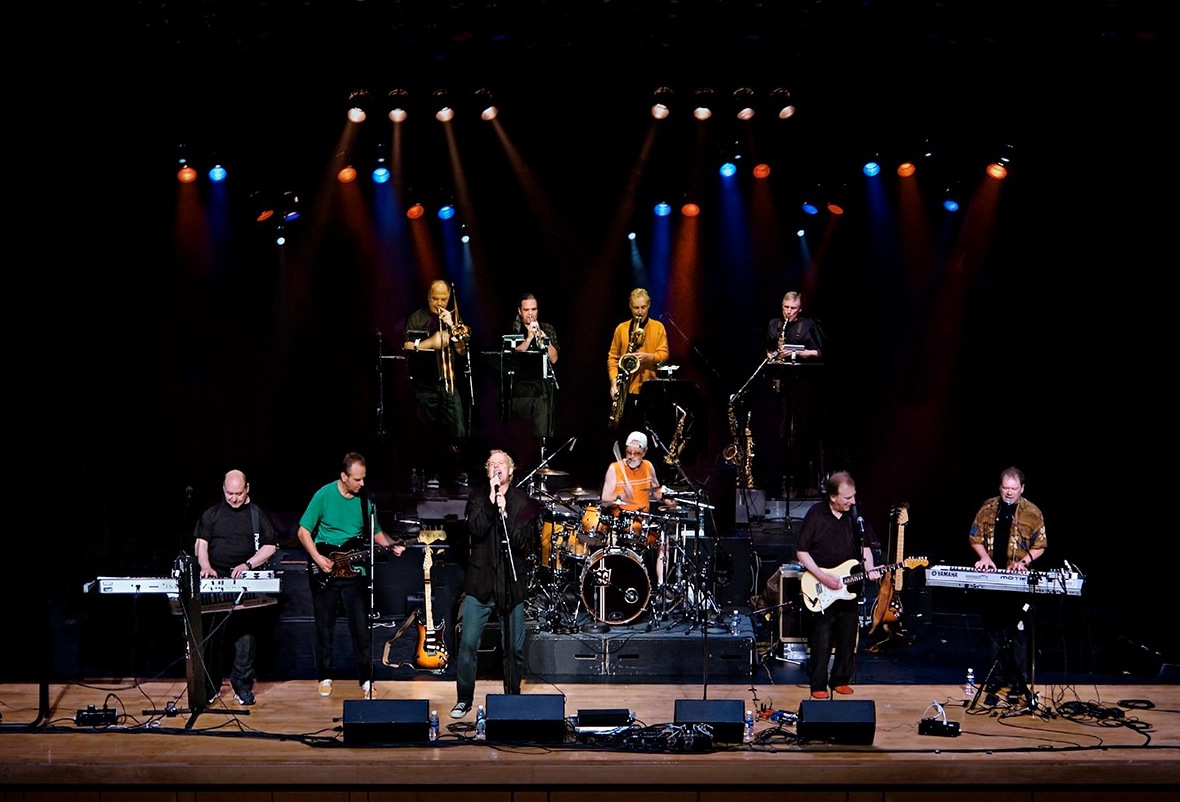 As we’re working away on the preparations for the upcoming benefit concert for Freedom House’s Kindness Project starring classic rock greats Lighthouse, I can’t help but think back to the first time I plotted to bring that band to Brantford. It was more than a few years ago; in 1973 (I’m that old!). So down rock n’ roll memory lane we go…..

In ’73 I was in grade 13 (yes, there used to be a grade 13) at North Park Collegiate and was vice-president of the Students’ Council. My partner in crime, president of the council, was my late friend Chris Lewis. We had a whole bunch of talented people on that council. I remember Donna Thomson, Sandy Derbyshire, Rick White, Hilary Marsh, Bill Gale and Ken Wolff. Our council had had a great run that year with a series of big dances. A Foot in Cold Water had played, and a group called Scrubbeloe Caine. Then we brought April Wine to the school and the event was way too successful.

We put 1200 people in the gym which was supposed to hold 800, and had another 500 out in the parking lot trying to get in. Well, there were some broken windows and other problems and that was the end of dances for that year! We’d also pulled off a “surprise” for the school’s Christmas assembly that kind-of blew up in our faces Without telling anybody, Chris and I booked pop group Edward Bear to play a surprise show at the end of the assembly on a Friday afternoon. I think we paid them $700, and planned to make the money back with an after-school concert. Between the time we booked them and the day of the surprise appearance, Edward Bear released their biggest hit The Last Song and it went into the international top-ten charts. Suddenly Edward Bear was everywhere on radio and t.v. and became one of the most popular soft-rock groups in the country. Well bless their hearts, the band decided to honour their contract with us and dutifully turned up at the school on the appointed afternoon. Their equipment was set up under strict “security” behind closed drapes and the band arrived just before the assembly. After the usual assembly stuff…a few numbers by the school band, some sketches and announcements, a performance by the cheerleaders and so on……we announced Edward Bear and opened the curtains. They started playing The Last Song and the place went nuts. All the grade 9 girls rushed the stage and pandemonium reigned. It was like something from a Beatles movie or a Justin Bieber appearance at a shopping mall…..screaming, fainting, grabbing…and damage to the school band’s instruments. Ouch. We heard about that one.

So now the emboldened North Park Students Council, Lewis and Gillies Proprietors, had a taste of rock n roll success and we started to think really big. Why don’t we bring the biggest band in the country to Brantford? Lighthouse! In ’73, Lighthouse was as big in Canada as the Rolling Stones, The Band, The Grateful Dead….you name it. Since forming in 1968, they had had a string of hits including One Fine Morning and Sunny Days. Their free concert in front of Toronto City Hall in 1969 drew 25,000 people. They had co-headlined the 1970 Isle Of Wight rock festival in England in 1970, along with Jimi Hendrix, The Doors, The Who and Joni Mitchell. They played other major rock festivals playing in front of two or three hundred-thousand people. Lighthouse was big enough… then The Guess Who broke up (the first time) and that firmly cemented Lighthouse as the biggest band in Canada. Could we get them to come to Brantford? We started quietly to put together our plans. We contacted their agent in Toronto and were told that their appearance fee would be $4500 plus a percentage of the gate….a considerable amount in those days (the most we had ever paid a band to play at the school was $1500 for April Wine). So having them play at North Park was out of the question. The only place in town big enough to accommodate this concert would be the arena at The Civic Centre.

So our council went to the school principal Glenn Kilmer and told him what we wanted to do.

We wanted to end the school year by mounting the biggest rock concert in Brantford history. Mr. Kilmer, who was far from stupid, really wanted this idea to go away. But he also didn’t want to blemish his record of encouraging us kids to do great things and reach beyond your grasp so he didn’t want to say no. So he told us we couldn’t use student council funds to put on this concert. We would have to find financing. If we could get a bank to loan us the money, we could go ahead. So we needed to find $8000 (to pay Lighthouse and two warm-up bands, the Civic Centre, security, advertising etc. etc.). And so we naively set out to approach local banks to lend us this money. To mount a rock concert in a town that didn’t have large rock concerts. After the third bank manager laughed us out of his office, it looked like we were s.o.l.

Then the vice-principal of our school, the hard guy, the enforcer, the one who did all the tough stuff to keep everyone in line – Noel Mason – came to our council meeting. “You guys really want to do this don’t you?” He could see the passion we all had for this project. “Yes sir, we really want to do this.”. “O.K.” said Mason, “I’ll sign a loan guarantee at my bank. You can go ahead.” These days, a school official would probably be fired for doing something like this. But back then, Principal Kilmer’s word was law and the Board of Education knew better than to try and stick their noses into anything at North Park. Kilmer looked somewhat bemusedly at us and said “go ahead”. And “don’t lose Mr. Mason’s money. If you do, you’ll answer to me”.

So we kicked into high gear and started planning our concert. We set a date, booked the Civic Centre and (hands trembling) signed the contract with Lighthouse. We had a modest budget for two warm-up bands. I remember we booked blues band Mainline as the second act, and then took proposals for the first warm-up band. The phone rang off the hook. Every music agent in Toronto wanted to get their band on that bill with Lighthouse. This is where the story takes an almost surreal turn. An agent from The Music Shoppe agency called us and said “band X really wants to play this show. They’ll do it for $750”. We laughed out loud. Council president Chris Lewis said “are you out of your mind? That’s the worst bar band on Yonge Street. There’s no way we are putting them on this show.” Music Shoppe called back. “X really wants to do this show. They want to be able to say they’ve played with Lighthouse. They’ll do it for $550.” “Absolutely not”, we replied. “We wouldn’t let them play this gig for free”. Music Shoppe called back one last time. “My boys say they’ll drive down with their amps in their station wagon. As long as they can use Lighthouse’s p.a. system, they’ll do the show for $250.” Absolute and final no from us. That band was Rush. Oooops. Well, you don’t always get it right! (I’ve since met Geddy Lee and reminded him of this story. He laughed, and I wondered to him how many people around the world have since paid $250 for a ticket to see Rush!)

Anyway, we booked a band called Brutus in the warm-up spot… their singer Walter Zwol went on to solo success. And we announced the show. Tickets were sold at the school, at the Civic Centre and at the Sam The Record Man store downtown. And we rather quickly sold 4000 tickets. We hit a bump-in-the-road at this point as a personnel change led Lighthouse to have to change the date. But we rebooked rather painlessly and carried on. Had to change warm-up bands though, to Downchild Blues Band and Flying Circus.

The day arrived and there we were at the arena. The musicians started arriving and we were rubbing shoulders with rock stars Skip Prokop, Paul Hoffert and Ralph Cole. The Lighthouse line-up in those days included Howard Shore, who went on to be the first musical director of Saturday Night Live. Howard is now the Oscar-winning music producer of huge Hollywood movies like the Lord Of The Rings trilogy. Sometimes if a member of the band couldn’t make a gig, the band’s multi-talented friend Paul Schaeffer would sit in. It was a magical time in Canadian music.

When Lighthouse took the stage, the Brantford Civic Centre erupted in cheers and hundreds of kids rushed the stage. The whole place was jumping and dancing in the aisles from the opener “You Girl” until they finished with their world-wide hit “One Fine Morning”. And the whole town was talking about the show for days. We had pulled it off. Brantford had hosted a big rock concert with a stiff ticket price… $4.50!

So now, all these years later we’re bringing Lighthouse back to the Sanderson Centre on Thursday, November 1. Tickets are $45 (including the after-party with the band) and $30. Sorry, I couldn’t resist that shameless plug.

People around town still remember that gig in 1973 and I’m surprised how often I get asked about it. I wonder how many of us will be feeling 18 again when Lighthouse takes the stage this fall.