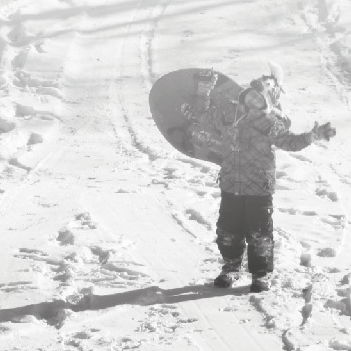 I spent my childhood growing up as a sports fanatic in Brantford. I had my share of childhood sports heroes in every one of the major sports: Mike Schmidt for baseball, Michel Goulet for hockey, Randall Cunningham for football and Chris Mullin for basketball.

While growing up in Henderson Survey I spent most of my days out in the yard or on the street, trying to get in as much baseball and basketball practice as I could get before, during, and after those minor sports seasons. I would try and mimic the work of my heroes anytime I got the chance to compete.

As high school came around, I made some changes to my sporting interests, moving away from baseball and basketball and into rugby and soccer. I also gained an interest for hockey, although my inability to stop on a pair of skates limited my desire to actually go and play. It was the sport of hockey that introduced me to community sports during that time. I remember attending a Brantford Smoke game down at the Civic Centre and enjoying the level of competition that was right in my backyard. But it was a one-time thing, and I never found myself back at the Civic Centre for another game.

Several years later I returned to the community and soon after, began working at Rogers TV. As I began to cover many of the events that happened in the community, I started to realize just how deep the pool of athletic talent was in Brant. I met the men and women who were excelling in college, university, and professional ranks in a wide range of sports. I began to understand the real strength of our sporting community. My work at Rogers TV led to an opportunity to sit on the Board for the Tournament Capital of Ontario which, in turn, led to volunteering for the Brantford Sports Council. Those opportunities only helped to embed an even greater desire to continue to learn about, watch, and enjoy the sporting achievements of our home-grown athletes and local professional teams.

I can say that I have been in attendance to celebrate several of Brantford’s greatest sporting achievements over the last decade. I sat at Labatt Park in London when the Red Sox celebrated the dramatic Game 7 Championship win that started the dynasty. I sat at Centennial Stadium on Hallowe’en in 2010 as the Brantford Galaxy won the CSL Championship in their inaugural season. And one that I missed live I watched with pride as TSN broadcast the Brantford Blast’s winning of the Allan Cup. These are just a few of the victories our athletes have proudly won for this community, with countless more being celebrated every day by kids and adults of all ages.

It’s incredible when you read the sports pages of The Expositor or The Brant News and learn about all of the amazing victories our athletes are capturing. And those who know realize there are so many other stories that there is never enough ink to get printed. They are our student athletes starring for college and university squads, our minor sports teams that win tournament championships, and our players abroad leading the way in professional leagues all over the world.

Brant has become a centre of sporting excellence. Not just Brantford, but Brant County and Six Nations as well. This tiny chunk of our nation is graduating a host of talented athletes for our next generation of kids to look up to. It’s happening across the sporting spectrum, both male and female. Whatever our children aspire to play; there is someone from this community to look up to. It truly is an incredible accomplishment to be celebrated.

We are continuing to build a greater culture of appreciation for these athletes through our recognition of what they have achieved. Our news media has helped create that culture through their coverage of local sports. Our community has helped create the culture by having community celebrations for our championship teams. And our sports organizations themselves have contributed to creating the culture through the Sports Recognition Banquet, the Sports Hall of Recognition, and the many photos and banners that don the walls of our athletic facilities.

At a time where many of us are struggling, and our community struggles alongside us, our athletes are doing their best to provide us with something to be proud of both as individuals and a community. It may not be you that’s making waves as a rookie in the NHL, but a kid from a family like yours is. That’s something we can all be proud of.

Our local athletes are setting an example for our children. They have played on these same fields, in those same tournaments, on that same ice as our kids are today. Now they play with our heroes, alongside our heroes, as our heroes. Leave my childhood passion for sports in the past. Let us teach our kids that, instead of being a sports fanatic in Brantford, be a fanatic of Brantford sports. Go out and cheer on our local teams and athletes no matter what sport you enjoy. The opportunities are endless, the victories are countless, and the community pride is everywhere.