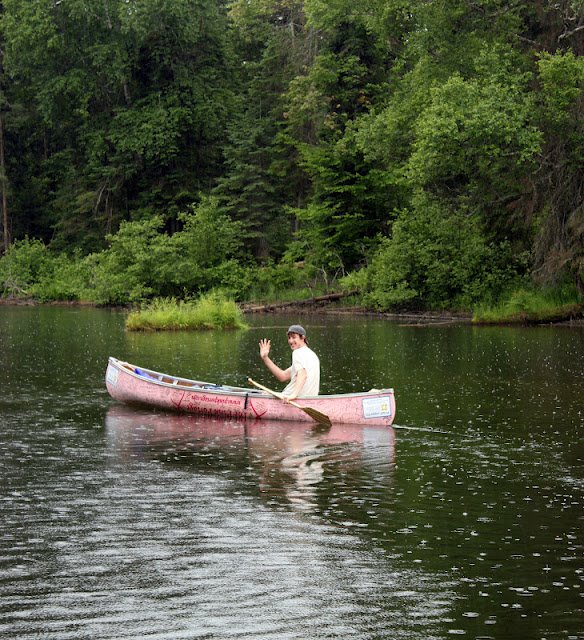 Conquering day 47 of his journey and spending his last night in Brantford, 21-year-old Andrew Metcalfe, also known as the Pink Portager, is thankful for the hospitality he received as he rests his aching bones.

For a small town, Brantford offered Metcalfe quite a turnout as well as a place to sleep and some great company. “I had some people, who were in contact with me since Barrie, meet me and walk with me through Brantford. It was nice,” he said.

He is thrilled with the many strangers who have helped him along the way, with bottled water, food and motivating enthusiasm, but makes it perfectly clear that there are no rides allowed. Sheilagh Scanlon had the privilege of speaking with him as he was just walking into Cainsville on Colborne St. East.

“There was thunder booming and lightning streaking across the sky. I saw him on the road and knew exactly who he was. I immediately pulled over to say hi and offer him a ride. He wouldn’t accept one saying that “that would be cheating” so I gave him a donation and signed his canoe,” she said. Metcalfe welcomes the rain because it’s a short break from the heat wave he has been braving, and his canoe acts as shelter.

Although he said it will be hotter and hotter as he continues, he is glad that it’s all down hill. With roughly 16 to 20 days left in his journey, which started on June 3 in Kingston, Metcalfe is heading from the Brantford area toward his final destination of Windsor.  Altogether the trip is 1200 km. At the time I wrote this article, he had raised $20 000 and, if he raises $25 000 by the end of his journey, Shoppers Drug Mart has said they will double it.

Before he set out to raise thousands of dollars for cancer research, Metcalfe was a nursing student at Ryerson University, born and raised in Toronto. Breast cancer had been prevalent in his family. His mother suffered from it when he was young and has thankfully been in remission until today. His grandmother and aunt were later diagnosed with the disease. His grandmother survived but, sadly, he lost his Aunt Kristine. These experiences inspired him to fight for a cure and invent what we all know now as the Pink Portage.  Portaging is when one carries their canoe between two entry points of water.

“My friends and I were sitting around a campfire when I came up with the idea. They called me crazy but here I am now,” Metcalfe explained. Taking the personal canoe he’d had for two years, Metcalfe painted it pink himself using a mix of white and red. “Real men portage pink,” he said jokingly.

Only in Algonquin Park did his canoe touch water.  Since then it’s been strictly portaging.  He alone carries his own camping gear including a tent to sleep in if he isn’t offered a bed and freeze dried food to eat to keep cost down, not to mention the canoe. All his supplies come out of his own pocket and 100 per cent of the proceeds he receives go directly to the Canadian Cancer Society. Despite this lack of resources Metcalfe hasn’t had many issues. “I didn’t go with the sponsorship route because I didn’t want to sell myself out, and I didn’t really get into the press until now, but it’s hard to ignore a guy with a pink canoe on the side of the highway,” he said.

The biggest challenge that Metcalfe faced happened while traveling from Kingston to Ottawa. “I ran into issues finding water and I had to drink from a swamp,” he said. When the trip is over he plans to return to being a normal 21-year-old and enroll in the Paramedicine program at University of Toronto-Mississauga.

Metcalfe shared his words of wisdom.

“You’re never too young to give back. You don’t have to do a crazy portage, or give a million dollars; Just give back to your local community. We’re all in this together at the end of the day,” he said.

Visit www.pinkportage.com, give a donation and sign the guestbook. Together, We Can!