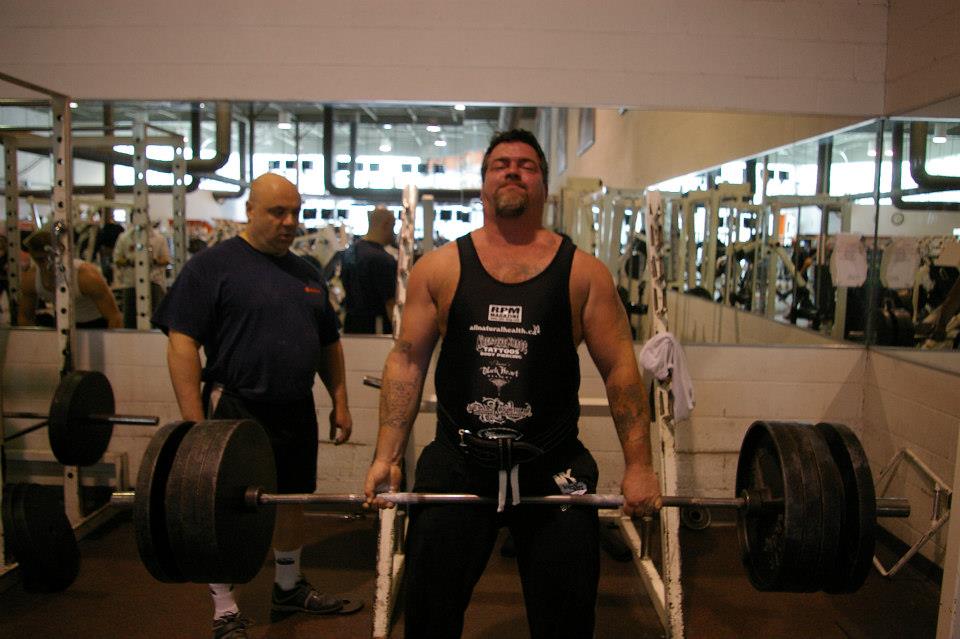 February 16th, 2013 was a day that will go down in the record books… at least for me it will! It was day that Canadian National Records (in a specific age and weight division), in the Bench Press and Deadlift events at the 3rd Annual 100% RAW Toronto Open Powerlifting Meet, were set by a Brantford resident. But as much as this could be a sports story, there is a greater life lesson that has come of it.

Growing up in the late 60s and 70s I, like many, encountered all sorts of the good old fashioned bullies that movies are made of. Seems that doing well in class, being slightly over-weight and the son of a police officer put me on just about everyone’s hit list. Back then bullying was mostly a physical thing, and pretty much accepted by the society of the time. I personally managed to survive what was then considered as “boys being boys”, plus things like being pushed through windows and unwillingly inspecting the inside of garbage dumpsters.

I played a lot of sports in grade school, and had a large growth spurt just before grade 8. Interestingly, becoming bigger and stronger than most of my peers, quickly put an end to the physical bullying, but also set me up to becoming a bully. I would like to think the target of my anger was other bullies, but reflecting back on my life, I probably bullied some innocent people too. Now I realize that the only thing I actually accomplished through it all was making my own life more difficult.

The face of bullying has changed dramatically over the last 40 years. Now, many of those that first bullied me, would be quickly removed from schools, or even mainstream society if necessary. But the non-physical aspects of bullying live on and are thriving within the seemingly endless, limitless, and often invisible, internet world, with the greatest challenge yet being how we as a society can combat it.

It is not just teenagers that face this “new” bullying either. In 2011, being 45 years old, overweight and out of shape (unless you count round as a shape), I went on a diet and dropped from 308lbs to 255lbs fairly quickly. I continued on a program of diet and exercise and found that my body fat percentage dropped even more dramatically than my weight, and I started to feel good about myself again.

Then, in the fall of 2012 while discussing an injury I had in the gym and the positive response our healthcare system had for me, I received some negative comments about my age, weight, etc. Having outgrown the idea that a physical response to being bullied is appropriate, I responded in a different way. Being “older and wiser”, I realized that using negative comments as motivator to make positive changes in my own life was a far more effective weapon.

In November of 2012 after being called a “fat, old, weak….”, well you get the point, I decided to join the 100% RAW Powerlifting Association, and began training as a powerlifter. I had a good base to work from, and with the help of David Gratton, a veteran powerlifter and former Brantford resident, I started training in the sport of powerlifting.

With the help and support of Brantford based business’ RPM Magazine, Kreative Khaos, Everything Automotive, Black Heart Designs, Allnaturalhealth.ca, Vegas World, and my employer Sun Life Financial Services, I was afforded the opportunity to put my new training to the test on February 16th. I’ll be honest, as exciting as it was to set records within a sport I was relatively new to, I have to say that I enjoyed meeting new friends and “showing off” the new and improved me as much, if not more.

And that really is the point of my story. In today’s internet language, “haters will hate”, and there will always be haters in this world, be it physical or virtual. We are all sensitive to criticism, it is just human nature, but the choice is ultimately each of ours. We can use their words to pull us down, or as motivation to improve our life or the lives of others. Just a quick look around our world of today and we can see the ominous power of negativity and the impact it can have on individuals and societies as whole. So why not take this power and turn it in to something positive, something for you and those around you– use it to make a change for the good.

The bottom line is, does what someone else say or think about you really matter? Not really! Start a new hobby, join a club, do anything but don’t let it pull you down. It won’t take long for you to realize that there are far more people that will encourage you rather than bully you, and exposing yourself to those people will make life so much more worth the living. When you live life so everyone is either a motivator or encourager, you will be carving out your own future, on your own terms. Surrounding yourself with good people can only lead to good things! Bullying is a small exclusive club that is built on hatred and intimidation, and one that I have no desire to ever be part of again.