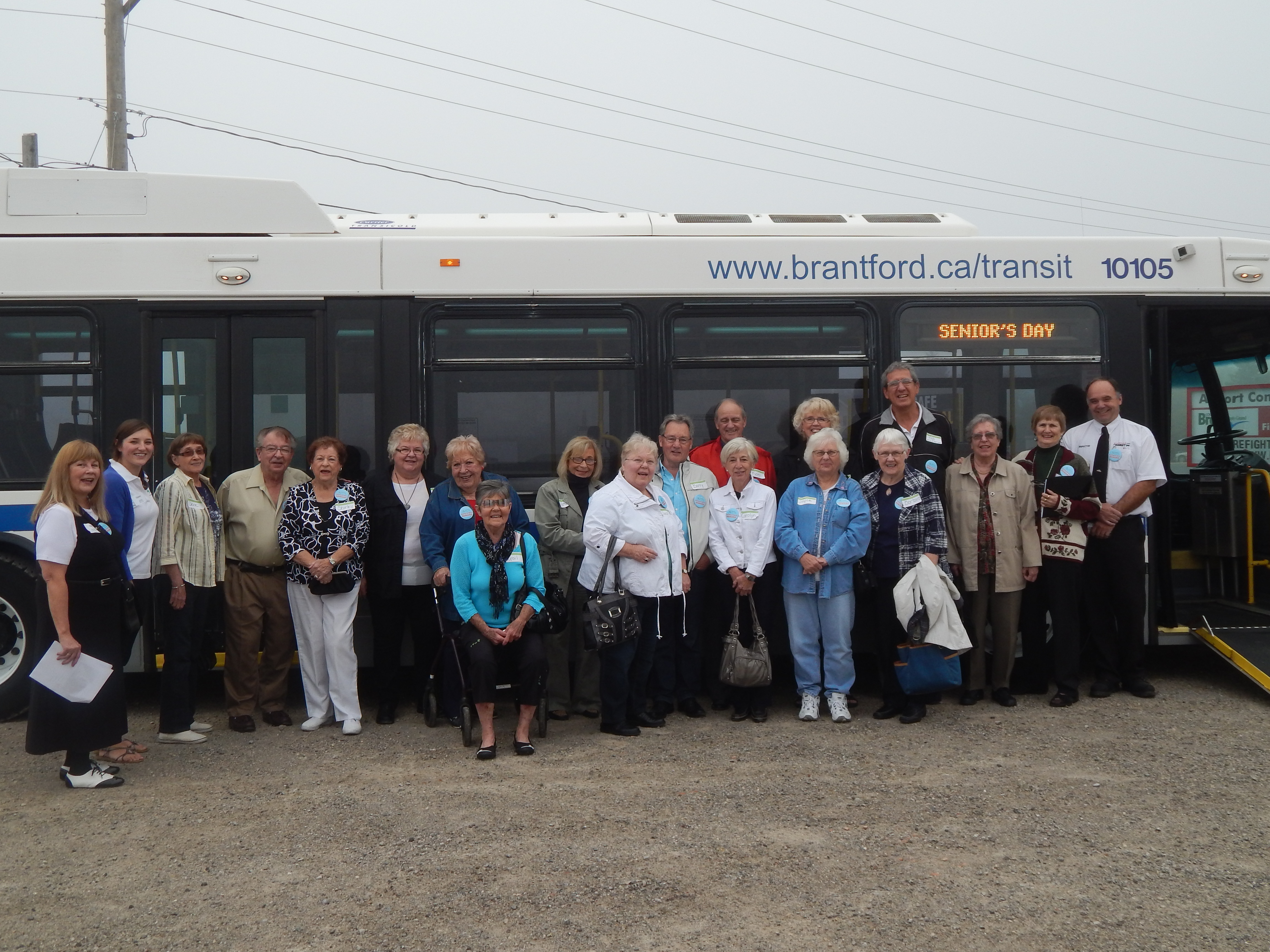 Approximately 20 seniors were invited to take part in a “workshop on a bus” and boarded a Brantford City Transit for an introduction to riding a bus and taking a tour of Brantford. City Council passed a by-law to waive the charter fees and, as a special surprise, Brantford Transit changed the electronic banners on all city buses to read, “Happy National Seniors Day.”

The Group gathered at the Airport Community Centre and ably chauffeured by Transit Inspector Dale Longstreet, embarked upon a short, educational tour, making four brief stops along the way. The first stop was at the main branch of the Brantford Public Library where the riders were greeted by Paula Thomlinson and Manjit Singh who described the many programs and services available for older adults at the Library. In a lively discussion that followed, the riders contributed their thoughts about new programs for seniors the Library may wish to introduce.

The second stop was at the newly opened Grand River Community Health Centre which is located in the former McHutchion Bakery. Here, Dwayne Richardson boarded the bus where and described the programs and services provided for seniors. Many of the riders had not yet toured the new health centre, and were encouraged to come back another time for a longer visit.

The bus then proceeded to Brierwood Gardens, where Nina Okopien described the only 3-tier senior residential housing in Brantford. Owned and operated by Revera, this location offers seniors independent living in one or two bedroom apartments. In another building, retirement living is available for those who wish to maintain their independence but may require some nursing care. Finally, a nursing home is available.

The final stop of the day was at the downtown Brantford Transit terminal office, where Elly Vandermade and Mike Bradley, of the City Transit department, came on board to explain how the buses, their routes and transfers function and the particular attention paid to the welfare and safety of seniors.

Dale Longstreet demonstrated how the buses have extendable ramps and how each bus can be lowered closer to the curb and can accommodate wheelchairs and walkers, and in some cases, even scooters. Seniors get first priority seating on the bus and enjoy a discounted fare.

Throughout the morning, volunteer tour guide, Kathy Poirier, provided the group with tidbits of local history, and upon the return to the hall, Lucy Marco engaged the group in an evaluation session of the day. A refreshing lunch was provided by Amberlea Place, delivered to the hall by Administrator Ruby Toor and Irene Hotte. Following the meal, Barb Day, a local poet, entertained the seniors with her own poems about, “Poor Mr. Jones, the Candy man and My Generation.” All in all, a good event was enjoyed by all! Each senior received a wonderful bag of information and favours donated by various agencies and organizations throughout Brantford and Brant County, as well as a certificate of appreciation for their participation and feedback. Door prizes were won by Donna Creighton, Helen McGregor and Joyce Sasse.