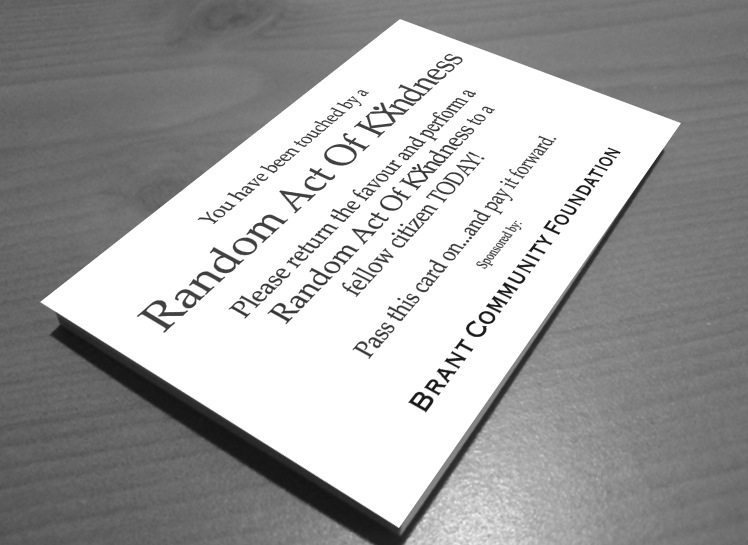 You’ve had one of those weeks. You’re standing in line for a coffee you desperately need, wondering what else might go wrong. When you finally make it to the front of the line, the clerk tells you your coffee is free. Pardon you ask. “’Yes,” she insists, “the person behind you paid for it.” With that she hands you a business card, explaining you’ve just experienced a Random Act of Kindness. While it may not undo all the stresses of daily life, the Brant Community Foundation believes simple and spontaneous good acts can go a long way.

To be completely honest, I didn’t know the Brant Community Foundation (BCF) even existed before last summer. You might think this was because I had only lived in Brantford for about two years, or that maybe I wasn’t someone in need of their services, but really, the BCF felt the same way. There wasn’t enough awareness of their efforts in the community and yet, they are a charity for charities with the mandate to build our community. Odd.

I was asked to sit on the committee last year and help plan the first Random Act of Kindness (RAK) Day in Brantford and Brant County. Personally, I was very drawn to the idea that in our hectic lives, we can often forget to extend kindness. That we can be in such a rush that we don’t event hold a door open anymore – or maybe don’t even notice the person behind us – and don’t stop to think about how we can be intentionally kind to the people we cross paths with every day.

I worked at McDonald’s when I was a teenager and although it was probably the vain of my existence at the time, in hindsight, it left me with some really positive memories. I remember this one time a car pulled up to the window and paid for their order. Then they asked if they could also pay for the order of the car behind them. Kind of stunned, I took back their debit card and processed the order. I then had to ask why. They explained that they were having trouble getting in off the main road and into the drive-thru, but then a car already in line allowed them in. They wanted to return the kind act with one of their own. You can imagine my delight when the next car rolled up: I got to tell them their order was taken care of. They were sincerely touched and equally stunned. It often bothered me why we were both stunned as to how many random kind acts we had both experienced.  This story, among others, is what really excited me to help plan RAK Day. That and because Brantford didn’t hold a great reputation from where I came from, I wanted to be a part of changing the perceptions toward the place I’m now proud to call home.

I would call last year a great success. We had a lot of fun on our Media Launch Day giving out popcorn with Captain Kindness and Freedom House Church in Harmony Square. We received great support from local companies that agreed to hand out RAK cards on our behalf and about 15 volunteers who came out on the day of. We did everything from raking leaves to handing out quarters for shopping carts at FreshCo., and pumping gas to delivering goodies to the local police and fire departments. Mayor Chris Friel joined us for our wrap up lunch and we discovered that his was one of the very cars we pumped gas for that morning – an interesting tie-in we didn’t plan for.

There were also some great stories that came out of last year’s event. One that stood out was in preparation for RAK Day. We had some Rogers co-op students go out and create a buzz for RAK Day and one of their ideas was to offer hugs. One woman thanked the young man who gave her a hug and continued to explain how much she needed it. That very day should have been her 55th wedding anniversary, but her husband had passed away earlier that year. Another story, not quite so touching, was from a man who got pulled over for speeding. Imagine his relief when the police officer told him to be thankful it was Random Act of Kindness Day and let him off with a stern warning!

For the reasons I’ve shared and more, Brantford & Brant County are celebrating Random Act of Kindness (RAK) Day on November 4, 2011. This day is used to honour the good in our community, but also as a catalyst for the year ahead. I’m the first to admit that I can get caught up in my own little world and forget that sometimes it’s okay to go off schedule to help another person. A woman shared a story with us about a man stopping to help her when she was stranded on the side of the road. The story took place 26 years ago and yet it was still so vivid in her mind. Imagine the effect we can have on each other with this kind of thinking.

Keep your eyes open for RAK cards (what someone hands over after doing a kind act) as they encourage the Pay It Forward spirit of the day. If you’re interested in joining us on Random Act of Kindness Day, visit rakbrantford.wordpress.com. Otherwise, we’d like to encourage you to intentionally perform a kind act the next time the opportunity arises, RAK card or not. You’ll be making a difference in someone’s life.