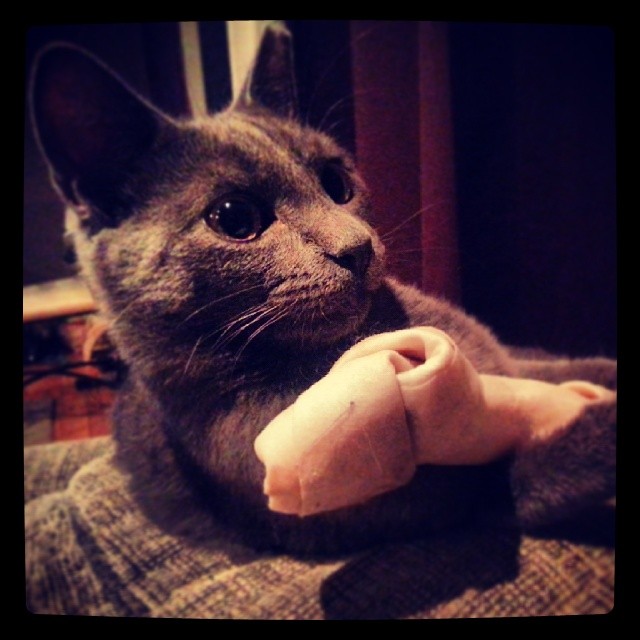 The Brant County SPCA’s executive director, Robin Kuchma, assisted in running the Adopt-a-Thon at the PetSmart at 211 Henry St., where rescued cats were given homes. This was part of the SPCA’s effort to make room in their facilities for other cats from Brant County’s burgeoning stray/feral population. This winter’s extreme weather — most notably the Polar Vortex — has led to an influx of people bringing in stray/abandoned cats to the SPCA.

“People want to take these homeless cats to the SPCA. We can only help them if we have cage space,” said Kuchma. She urges people to call first before bringing in these cats, unless it’s an emergency, because the SPCA has limited accommodations that are prioritized for animals most at need. She also wants to avoid euthanizing animals whenever possible.

The waiting list and cages at the SPCA are overflowing with cats from a stray/feral population estimated at an astronomical 70,000 to 200,000 (figures calculated by an equation that factors in food sources, land area and human population) that’s still growing. Although these numbers may sound inflated at first, once one considers that a female cat and her offspring can theoretically proliferate to a population of 420 000 cats within seven years, along with the reality that the city of Brantford has no bylaws against wandering cats, licensing and trap-neuter-release programs or low-cost facilities, the numbers begin to look all too plausible. The daily complaints the SPCA receives from residents regarding stray/feral cats include howling, excrement, fighting during mating seasons, and spraying of urine on their property (bushes, doors). Kuchma points out that once spayed/neutered “the cat’s urine smell is lost, so you don’t have that foul or strong urine.” The cats also lose their urge to reproduce, removing most problematic behaviours.

“As an SPCA we want to help as many animals out there as we can, but we are a not-for-profit organization so our resources are limited. [Feral/stray cats] is not part of the city contract … Everything that we do for cats comes from the support of our donors.” Only one per cent of the 2,200 feral/stray cats taken in by the SPCA last year were claimed by owners — opposed to 60 per cent of dogs — which further exacerbates the influx within its facilities.

With the problem obviously grown beyond the scope of the SPCA’s finite resources, Kuchma, Coun. Larry Kings, Rick Levac (Manager of Licensing) and others in the community formed the “Task Force to Review the Regulation and Control of Cats in the Municipalities.” The task force already conducted several meetings and Kuchma is in the midst of deliberating on developing a first draft of recommendations that the task force will eventually present to city council, informing them on how best to move forward.

The task force believes strongly in trap-neuter-release programs and that their success will rely on a joint effort by groups and individuals in Brant County. “We’re looking at a partnership between veterinarians, SPCA, three feral cat groups and others,” said Kings. “…The vets can’t afford to [spay-neuter] for free … So we hope to get a vet or clinic dedicated to [operating on feral/stray] cats. We’ll probably look at [a] city subsidy to get the costs [lowered]…” Even with city subsidies, at an average cost of $200 per cat, it would cost $14,000,000 to spay/neuter just the conservative projection of 70,000 stray/feral cats in Brantford.

However, the taskforce believes they can overcome this financial obstacle: “If you spay/neuter them and put them back, new ones don’t move in and takeover that space,” said Kuchma.

Other individuals of Brantford concerned and disturbed by the problem are taking action and are invoking change. Brantford North End Cat Rescue, Telephone City Feral Cat Rescue, Haven’s Hope and Corkys Critters (sic) are some of the local groups beginning to implement trap-neuter-release programs.

At an industrial lot in Brantford, Telephone City Feral Cat Rescue’s founder Sherry Suprun and her volunteers have built make-shift kennels to house the 60 to 80 cats at this location. So far, through the support of Beattie Animal Hospital and other local clinics they’ve managed to fix 42 cats. Suprun actively seeks to inform the community via fundraisers and education seminars about cat overpopulation.

Suprun has become frustrated with the way the city and the SPCA have handled the problem. “We need the bylaw changed to six-cats-per-household from three, that way people aren’t going to get fined for feeding stray and feral cats.” Suprun wants them to act sooner rather than later.

“Hopefully we’ll have a recommendation before the summer on exactly how we’ll proceed,” said Kings. Recommendations won’t be enacted until 2015.

Marteleira and Suprun won’t disclose the locations of their cat colonies because of fear of animal abuse. “Some people don’t like stray or feral cats. They’ve poisoned them or hurt them, so we never disclose where they are. In other cities, the whole colonies have been wiped out by people who put poison in food, etc,” said Marteleira.

Suprun believes overpopulation has caused some people to deem feral/stray cats as vermin or “disposable.” Cultural sayings—like “a cat has nine lives”—exemplify this negative or blasé attitude. Overall, the Kings, Kuchma and cat rescuers all agree that multiple actions need to be taken. Or in jarring words: there’s more than one way to skin a cat (yet another terrible and derogatory expression). That begins with raising awareness about the problem throughout the community — curiousity did not kill the cat, but saves it.

“I think that people are more aware and realizing that there is a serious need. They are willing to take responsibility. I think we’ve come from a very bad place, but I think that we have a bright future now that more people are aware and talking about it,” said Seguin.