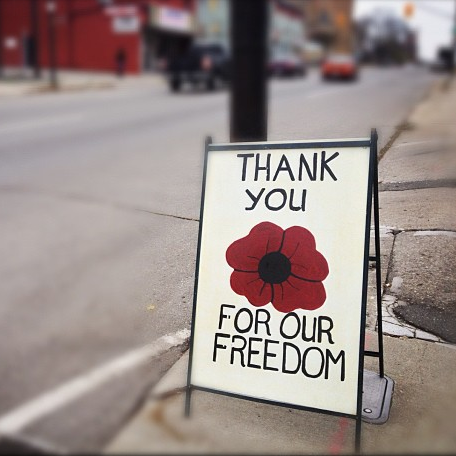 The small crimson flower pinned to our left lapels signal Remembrance Day is approaching. The seemingly unanimous meaning behind the symbol is the remembrance of fallen soldiers, but the significance of the poppy differs greatly from person to person.

Veteran Dick Wagenaar’s pale blue eyes widened when asked what the poppy means to him.

“I believe in it. I support it—I’ve supported it all my life. People have no idea what it means,” he said, placing his hand on his heart.

To Wagenaar, the poppy represents his and his fellow veterans’ sacrifices. He spent two years of service in Holland.

Wagenaar said that in choosing to go overseas, he sacrificed his entire life.

After his contract was up, he could not bear to re-enlist. Despite the fact he didn’t return, Wagenaar never stopped fighting. “I’ve been [in Canada] since 1952 and I’m going all the time. I keep going. I’ve got to keep going, because right now I’m fighting cancer,” he said.

According to Wagenaar, today’s generation doesn’t understand what war is truly like. The only way one can appreciate the symbolism behind poppies is to experience war themselves.

Brant Naval Veteran Association member Ron Stele said that poppies are to remember the lives that were sacrificed. Even though Stele’s brother served in Korea for three years, “he didn’t sacrifice anything—he is still alive. He simply did his job.”

Everyone’s definition of sacrifice depends on their experiences and what they have sacrificed themselves. Stele has never seen a war like his brother or Wagenaar have.

Wagenaar has been a member of the Royal Canadian Legion for 50 years. He says that everyone in the Legion understands and supports the poppy but many people outside of the Legion don’t truly support the symbol, even if they wear poppies.

“A lot of people don’t have any respect for the poppy,” he said. He believes the reason many people in society wear poppies is because they would feel guilty if they did not.

On June 30, 1948, an act in Parliament granted the poppy a trademark of the Legion which is the largest Canadian Veterans’ organization. As a result, the Legion was given the responsibility of ensuring that the poppy would never be used inappropriately such as for personal or commercial gain.

The Poppy Manual, released in 2011, outlines very specific ‘Poppy Protocol’ on how to wear the poppies respectfully. For instance, no pins other than those provided can be used to attach it to your clothing, even if it bears a Canadian flag, as this is defacing the symbol of remembrance. Also, the center must be black—not green.

It is interesting to note that Wagenaar, who is a member of the Legion, wears two poppies on his baseball cap, simply because they often fall off of his shirt.

Due to the Legion’s standards, it is clear that changing the poppies’ colour of blood red to white would be an issue.

On Armistice Day in 1933, that is just what a group of widows did. The white poppy, often called the peace poppy, represents all of the lives that have been lost in war, including civilians. These poppies encourage people to do more than just remember, but to also work towards peace so more lives are not lost in violent conflicts.

Some wear red, some wear white, and some choose to wear no poppy at all.

John Cocarla, a Laurier student who majors in Philosophy and Global Studies, delves into his own meaning behind the poppy. He believes wearing a poppy has political resonance as it is supporting a government that advocates war.

The white poppy certainly represents peoples’ desire to find a peaceful solution to war. However, Cocarla believes that wearing a poppy is in no way striving for peace: “If people truly wanted to remember the dead, they would actively seek an end to war.”

For this reason, Cocarla elects not to wear a poppy.

“The way I choose to remember the fallen is through my right to vote, and the very personal way I mourn the lost,” he said.

The white poppy has caused controversy, not only legally but emotionally. Some veterans are offended that some people are not honouring how they shed blood for their country. Wagenaar’s opinion is that the poppy’s meaning should not be changed and that the colour should remain red. Cocarla believes that those who are offended have binary visions of the support of the military. Either someone supports the military patriotically, and they wear a red poppy, or they don’t support it at all. Ron Stele believes that poppies honour not only the fallen soldiers, but their families as well. Their endless support and suffering without their loved ones deserves remembrance too.

As a response to John McCrae’s famous poem In Flanders Field, poet Floyd Zurbrigg wrote a poem called In Canadian Fields which touches on the importance of remembering soldiers’ families. The last stanza reads, “To the one’s at home, we owe a debt/They suffered too, let’s not forget/While in Flanders Fields the poppies grew/The folks at home were heroes too.”

Whether the poppy stands for the sacrifice of a high quality of life, the lives of lost soldiers, their suffering families, late civilians, a peaceful future—or all of the above—the poppy’s purpose flourishes.

Wagenaar points to the two blood red flowers on his hat.

“I believe in the poppy, always have and always will.”