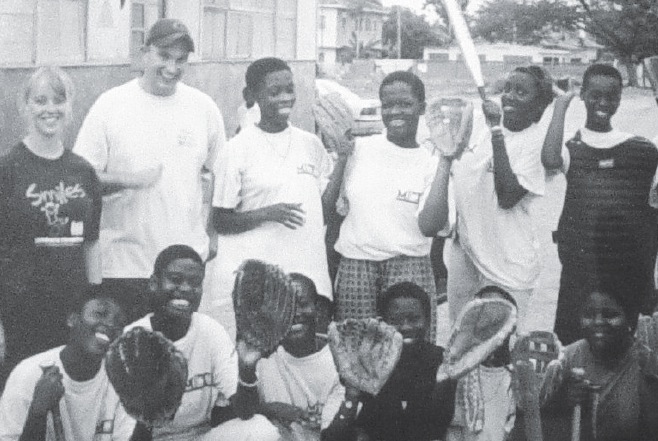 People who don’t fight in marriage concern me. My wife Krissy and I are scrappers. While dating, one of our first TALK talks, we decided to just tell each other every bad thing we’ve ever done to see if we still liked each other after. It was awkward and difficult and stirred up quite a wide array of emotions. The unexpected result was that after hearing it, like turned into love because it made us both want to fight for each other’s freedom. But we haven’t always been able to be that mature about it.

We celebrated our second anniversary in Accra, Ghana by eating a machete-cut pineapple from a roadside wheelbarrow and fighting with each other. It was a doozy too. We were just beginning the process of learning how to ‘do marriage’ together and we were thrust into a situation where we were right beside each other 24/7. Sleeping in a broken bed …sweating together. In taxis and Trotro buses… sweating together. In a classroom… sweating together. Sitting in various states of undress playing rummy and watching decades old reruns of The Bold and the Beautiful on Ghanaian TV… sweating together.

We completely got on each other’s nerves. And when I say that, what I really mean is that we got to the point where every time the other did something, we were banking our anger so that at the next available outlet, we’d go down the same you did, you said, you are road again. That muggy night, we retreated to our bedroom to fight, and I was a particularly harsh jerk to my wife. I don’t remember the specifics of what I said, but I do remember exactly what she said. I watched her hit her breaking point and look up at me with tears in her eyes and say,

“Dave, I don’t need you to criticize me anymore. What I need from you is to love me anyway. I need Ridiculous Love.”

When she said the words “ridiculous love” they hit me hard, and not in a fight back kinda way either. They were the first words that either of us had ever said during a fight that had settled something then and there. Our marriage changed that night. We instituted a policy of ridiculous love. The plan was that whenever she’d do something that made me mad, my job was not to give a death glare, criticize, or store up my anger to let it loose in an argument later. My job was to squeeze her hand and whisper the words “ridiculous love” into her ear. Her job was to reciprocate by saying out loud, “I receive it”. And we made it our responsibilities to mean it, and do it… even if we didn’t feel it. Ridiculous love is our policy until this very day. What it really is, is grace. It’s unmerited favour. And it’s necessary to make marriage, and life, work.

Marriage really is a fairy tale, but not in THAT way. It’s a fairy tale that includes dragons, and fighting, and politics, and lost friends, and hurt feelings, and poverty, and, and, and, and… Your job is to squeeze your spouse’s hand and honour the vows with ridiculous love. And sometimes you have to believe it, and act it out, whether you feel it or not, because you both need it. Marriage bears little resemblance to the gooey-eyed idyllic imaginary paintings that little girls suckle themselves to sleep with. The majority of the time, marriage consists of brokering deals, uncomfortable compromises, vigorous debate, weighing notions of morality and severing one’s own sense of entitlement.

Marriage is a voluntarily entered into institution that contractually obligates your life to be about SOMEONE ELSE.

I care about Brantford prospering. But Brantford is the sum of its parts. The number one thing that can distract me from being the Dave I wish I could be each day, is when things are not right in my relationship. And I suspect you might be the same. And it happens! That’s Marriage! Don’t despair! Marriage promises mean something and our ability to fulfill the “love, honor and cherish” part cannot be trusted to feelings. Love is not a feeling. It’s a choice. Kind of like how we can’t entrust the success of our New Year’s resolutions to the euphoric buzz we get by merely WISHING for the best.

Marriage IS like a fairy tale because even though there are many trials to overcome, you get the chance to overcome them together! It would be a pretty crappy fairy tale if there were no obstacles. When it’s right, it’s filled with ridiculous love. Something you have the ability to fill your best friend full of as you send them out the door this morning into our city to make a difference.