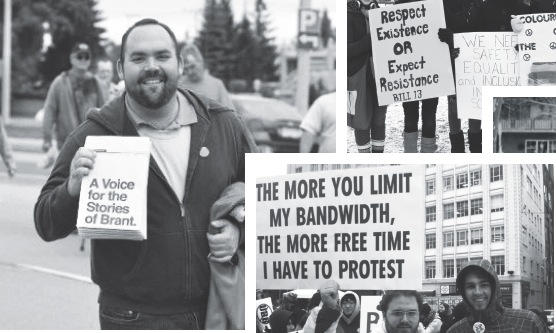 Time Magazine bestowed its annual Person of The Year title for 2011 on The Protester. To some the protester is seen as a motley crew of whiners and cry-babies. With the Occupy Movement we almost literally had Archie Bunker types from Toronto City Hall yelling “get off my lawn.” It would be comical if it wasn’t so serious.

To others still, like the editorial team at Time, in the past year the protester has been “more consequential” partly because “do-it-yourself democratic politics became globalized.”

Sure, there has been a lot of press about national and international protests recently. A lot has been written about the use of the internet (more specifically social media) as an organizing tool. I’ve seen that one in play myself and it is fairly effective. Yet as connected as we all are we have to remember the internet doesn’t create the protest. It’s just the newest tool to help those who organize do what they do.

Canada has an incredible history of effective public protests that in the fullness of time most people would say were useful. Some of these sparked consequential change like when our Veterans returned from World War 2 and took to the streets demanding investments in public housing. I’ve looked through many photographs from that time and I’m always impressed at the boldness of those protesters. I couldn’t help but think about how witty their signs were and how much more powerful the images were than any tweet could ever be. “From foxholes to shacks!! We had more room in the foxholes,” is just one of the signs from the archives that illustrate my point.

Putting the global and historical context for protests aside, what about Brantford and the surrounding area’s history? How do we stack up to the national and international protest scene? While we haven’t overthrown any dictators or had sleeping bags dotting the horizon line on the South Side of Colborne I’d say the protest movement is alive and well here.

Actually, protests and public gatherings are becoming a regular feature of our local landscape. I see three types of protests that have created conversation in our community.

From the once-a-year, out-of-town crew that come in to protest in their underwear about fur on Wayne Gretzky Parkway, to the crew on the other side of the spectrum that sets up shop each year on King George Rd. to protest abortion. These are regular features of the local protest movement that happen every year like clockwork and likely will for some time. These happen in cities all over the country and are as similar in those other cities as our Wal-Mart is to the one in Peterborough.

This is when we lend our people power to national or provincial movements. From religious leaders to young activists, Brantford and area has been fairly well-represented at: the G8 protests, the No Prorogue movement, Parliament Hill protests about First Nations taxation, the Anti-Usage Based Rally (#UBB), Vote Mobs, the CPP sit-in in Oshawa, Occupy Toronto and many others.

Our geography makes us one of the best places in the country to live. We’re so close to so much it makes sense that we can and do travel to major cities for protests and large public gatherings too. I’m always impressed when I see people I recognize from the area at these events. I remember being the only person from outside of Toronto to speak at the anti-UBB rally in Dundas Square. I had gone up with one friend who was with me on stage. I was absolutely taken aback by the cheers when I mentioned Brantford in my opening. A lot of our local students were in attendance as were former residents who now live in Toronto. Walter Gretzky is right; that Brantford really is the centre of the universe.

What I find most interesting though is the local protest scene. Over the last 3 years, the depth and breadth of protest we are experiencing here is huge. We’ve seen protests and public gatherings big and small over a wide range of local issues. The long list includes: development along the Grand River, the demolition of the South Side of Colborne, the Postal Strike, the dispute at ECP, the use of temporary work agencies, taking the HST off home heating, land claims, poverty & homelessness, domestic violence, peace festivals, rendering plants in St. George, mental health and addiction, Earth Hour, and most recently, a burgeoning LGBTQ rights movement. Despite all those I’ve just listed I know I’m still missing some and I believe there are many more to come in 2012.

We are an organized, passionate and compassionate community, and the move toward protest and public gathering on issues is very strong. Further, I’ve been noticing a few things at these gatherings. They’re more frequent, they’re more family friendly and they’re getting larger. It’s not just the usual suspects attending either. What I mean is that, as someone who has participated in many of these, I’m actually seeing less people I recognize yet more people in general. Young, old and everyone in between, from all different demographics and political persuasions, are beginning to appear at these community gatherings.

After an Anti-Bullying/LGBT rally in late December I received an e-mail from someone in attendance that said this: “I’m new at all this standing up for what is right. I want to become more involved.”

I hear a version of this all the time and it is very exciting when people learn to act and organize around their passions. Whether you agree or disagree with the points of view of those protesting or gathering the fact that so many are doing this shows we are a concerned and engaged community.

So, while I don’t expect the local Canadian Tire will have a run on protest tents this winter and I don’t think we’ll be occupying the rye grass on the South Side hill any time soon, I do believe that the option of protests, vigils and public gatherings is occupying the headspace of more and more of us and will continue to as we look ahead at the rest of 2012.

This column was written immediately following the funeral of a friend taken by cancer at the very early age of 56. A proud family man, business man and community helper who struggled for years coming to grips with his sexuality. With the support of his family and his strong faith he was able to live the last several years of his life as his truest self. He found a great deal of self-acceptance and acceptance from those who loved and worked with him.

I’d like to dedicate this month’s column to his memory. I spoke about him at the December Anti Bullying / LGBTQ rally after having just found out about his passing. I told a portion of his story. I cried. Many in attendance who had never met him shared their tears too. I was worried I may have stepped over some line sharing that part of his story. Even though it meant a lot to those gathered at the rally it may not have been my story to tell. In the emotion of that day it just came out. I was mentioning this to both his daughter and his partner as I left the funeral service. “Dad would have loved that,” his daughter replied. “That was so him.”

“That’s what Steve wanted to do next,” his partner told me. “Help others who had been in his shoes, especially youth. That’s perfect.”

One Reply to “Rockin’ The Suburbs: The Protest Movement in Brantford (Marc Laferriere, @MarcLaferriere)”