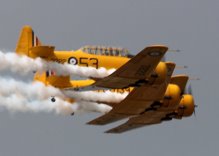 What is the allure of screaming jets in painfully tight formations and fixed wing aircraft tumbling through the sky above our heads that draws us to an Airshow?

Over 100 years ago in 1903, Kitty Hawk North Carolina, over 25,000 watched in amazement as the Wright brothers defied gravity for the first time in North America. At the end of August, at the Brantford Municipal Airport, we get to see the current evolution of flight, FREE, and from the flight line…up close and personal.

A combination of military precision and private daredevil aerobatics will thrill you as kids from age 3 to 103. On the ground will be static exhibits collected in such a display to tell the story of those who still defy gravity like Orville and Wilbur.

The Rotary Charity Airshow is August 27th, Wednesday, wheels up at 3:00pm.

Why Rotary? Because The Rotary Club of Brantford that lives the motto ‘Service Before Self’ is organizing this as a community event in order to sponsor two incredible local organizations, Lansdowne Children’s Centre and Boys and Girls Club. The leadership by the Rotarians and the hundreds of volunteers guarantee an exciting family adventure. They have planned a great show with amenities and attractions to entertain and satisfy the day’s commitment for young and old.

Why Charity? Because all of us realize that there is so much need to help the children in our community to grow and develop, and these donation recipients are models of investment accordingly. Both have strong local boards and credentials that are models of success across Canada. Partnering with both the City of Brantford and the County of Brant, it’s all about kids and families. Come to the show and help the kids…simple equation.

If you are looking for military jet precision flying, we have the perennial favourites, the RCAF Snowbird Team. Seven jets perform high speed maneuvers, literally above your head, and then they land a few yards in front of you and walk back for autographs with the crowd.

This year we have a special treat from the American Military. Perhaps you have seen the recent movie, ‘The Red Tails’ starring Cuba Gooding Junior. It’s a story about a regiment of black pilots that, until the middle of WWII, regrettably had not been allowed to fly in combat with their white comrades. Someone created a special task for these accomplished men, to escort bombers flying over North Africa and Europe to assist in the international war effort. They were given Mustang P51 aircraft and by their own decision determined to be identified by painting vibrant red tails. They were fearless, efficient and instrumental in changing the outcome in the 1940’s on behalf of the Allies. At the Airshow, Bill Shepard will be flying this famous machine.

Another military treat is the RCAF Sky Hawk Parachuting Team. With coloured smoke pots flaring from their legs and tandem chutes dragging 30 foot Canadian and American flags, they will land in front of the crowd and even offer demonstrations about chute packing for the kids.

And finally, from the military history of Canada, The Canadian Harvard Association of Canada will thrill you with the roar of their precision flying by four bright yellow WWII aircraft. This is the 75th anniversary of this organization and they will have a static ground display as well to celebrate their role over the decades.

We have four awesome aerobatic performers to make you drop your jaw open and go WOW!

Pete McCloud, a Canadian in his early 30s, is the fastest racing pilot in Canada and currently 3rd in the world. His Red Bull single seater and formidable technique at more than 10 G-force pressure will simply amaze you.

Kent Pietsch is an American aerobatics expert over the past 40 years and flies the ‘Jelly Belly’ aircraft. He has, as one routine, a dead-stick operation- engine turned off – whereby he flies to 5000 feet above the crowd, kills the engine and flips and tumbles out of the sky landing right in front of you, never starting his engine.

Trevor Rafferty, a young man from Southern Ontario, a second generation pilot, designed and built his Javelin aircraft for competitions and performances throughout North America.

Mike Tryggvason, another second generation Ontario pilot, in his Pitts Special Bi-plane will slip slide his way through the air as you have likely never seen before. Mike, in his normal life, is a conservative commercial pilot…who just likes to flip out during his spare time…literally!

Again: The Rotary Charity Airshow is August 27th, Wednesday, wheels up at 3:00pm.

Parking on surrounding roads will be restricted and enforced by Police. There will be arrangements for bus transportation announced by the City of Brantford. Gates open at noon, parking next to the airport for an entire family is $10, free admission, with food, amenities and displays throughout the area. Bring a lawn chair, camera, suntan lotion and strollers… but please remember, strictly enforced:

No PETS; No ALCOHOL; No SMOKING… anywhere!

We are looking for more volunteers! www.rotarycharityairshow.ca to sign up!