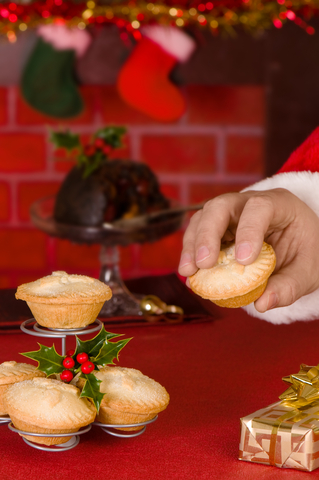 There were a few years where I was a rabid Anti-Santite. I was a Christian darn it! That jolly old man was one of the great deceivers of our time. A filthy mix of greedy consumerism and Oprah like nicey nicey feel-good pablum, that was conceived by the Devil himself to make us forget to do Living Nativities in town squares, and light advent candles.

My wife and I once ACTUALLY declined to receive a Santa-related gift as to not allow the enemy to infiltrate our jingle-bell haven. Deep sigh, I know, but don’t judge until you’ve tried earnestly to center your life around genuine service and devotion to a deity. Youthful fervor sometimes has social shrapnel.  Have a little grace. It does a body good to analyze our culture instead of just lapping up what we’re being handed.

It’s not just me. A friend of mine was once pastoring a church that was doing a Christmas play that included a painted Santa Claus character as a small part of the set. One Sunday morning service during a quiet portion, a voice began shouting from the back, “There is a messenger of Satan in our midst.  He lurks behind you. It’s SANTA!”  There’s no going back from that. It’s a good night everybody moment.

But, can Jesus and Santa, two Christmas super players, get along?

Even the carol “Santa Claus is Coming to Town” is a funny mix of Jesus and Santa.

This stanza has always fascinated me:

It’s like Santa’s doing his thing while respecting God’s turf.

Legend has it that the 4th Century Saint Nicholas once came across a poor man who had three daughters whom he couldn’t afford marriage dowry for. These were bleak times, and likely meant that these girls would become prostitutes. So one night Santa, eschewing public laud in place of modestly, saving face for the father, went to their home and left three purses (one for each daughter) filled with gold. The overwhelmed father caught Santa in the act, only to have the jolly old saint reply, “don’t thank me… but God alone.”

In another legend, Santa becomes a stinkin’ faith healer! During a time of terrible famine, a desperate but malicious butcher lured three little children into his house. Few good stories start this way. The butcher butchered the kids in order to turn them into meat pies, placing their remains in a barrel to cure. Thankfully, super Santa was nearby caring for the poor of the stricken region. He not only saw through the butcher’s horrific crime, but also prayed and resurrected the three boys. Now THAT’S a Santa story.

The real question as a parent is how to treat the Santa myth with our kids. It is a very legitimate argument to say, How can I convince my kids of a mystical man at the North Pole they never see but who cares and brings gifts, then tell them that he doesn’t exist, and then tell them that the other mystical man in the sky they never see but who loves them and gives them gifts DOES?  Santa has been tough for me and for every parent. Push DOES come to shove at some point.

I was the last kid in my class to finally figure out that Santa wasn’t real. While I took a youthful barrage of mockery and logic, I stood up to the doubters claiming that I had seen the real Santa,  and he lived in Muskoka at Santa’s Village. I didn’t want my kids to be that kid either. So we started off by not saying much at all about Santa. We have never played up the veracity of Santa. There are no “From Santa” gifts under the tree. But our kids have grown up enjoying the myth. It’s a lovely myth.

A couple of Christmases ago, my oldest son, Jared, asked point blank if Santa was real. I told him no. Was he crushed? Absolutely not. He was pumped that he figured it out himself!  We together identified what was the real Biblical Christmas story that he already knew and what was cultural myth. THEN I told him about the human meat pies of death, the power of prayer, and importance of defending the defenseless.  He thought it was awesome, like an action movie is awesome. I told him how Saint Nicholas took care of the three daughters and cared tangibly for the poor. He made the connection between our Great-Grandma knitting stockings today. We watched Elf that night and Jared winked at me as we kept the secret safe for his little sisters.

My kids have learned about the Biblical origins of Christmas and that it’s a way to incarnate love through gift giving today. Let’s tell the story of Jesus in our culture. It’s ever-present, relevant and is the real meaning of Christmas. Santa knows that we’re God’s children. Be generous and help each other in Jesus’ name. And, if you happen to see a bucket of people’s guts about to be turned into meat pies, think to yourself: What would Santa do?