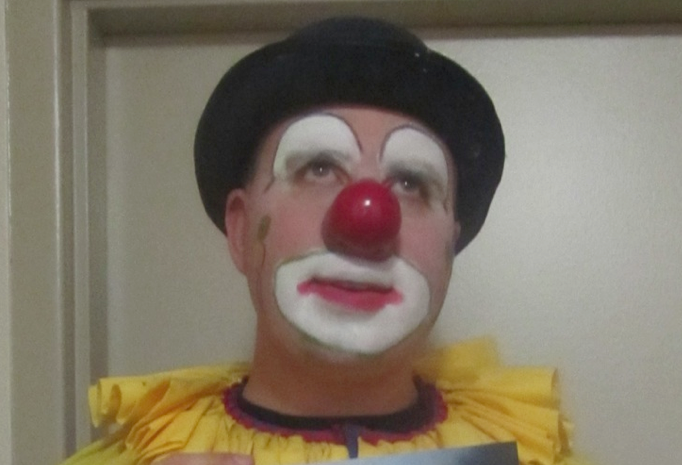 The first thing I see when I arrive at Marc Proulx’s apartment is him in full make-up and a bright red nose, despite his every day clothes. The next thing I see is balloons, in their pre-blown up state – on the floor, on the chair, in bags by the door, hundreds of them. He apologizes for the clutter, stating that he is preparing for a gig he had that night.

Marc is hardly your average clown however. At 27, he has been completely blind since the age of 12 and clowning is a way to support him. “I have tried time and time again to get jobs in our society. I’d give my application, I get an interview date and when the interview came around, people saw I was blind and I was turned away right away. You go and point that [discrimination] out to them and they don’t really admit that they are doing that. So instead of arguing it, I just picked up on a talent that I have and went with it.”

He’s worked with other organizations to try and find work, but it has always been temporary, and he has expressed a great interest in becoming financially self-sufficient, no longer relying on ODSP for support. Proulx has not let his disability slow him down at all, or affect his attitude. He happily chatted to me, and explained what he aims to do.

“I’m out there to create smiles; I’m out there to show people that you have a disability and that nothing stops you. I am totally blind, but I do some balloons and just basically humour with the kids. A lot of clowns will get to the birthday party and they’re quite quiet, many of them do not communicate with the kids. When I’m with the kids, I’ll say what’s your name, how old are you? I’ll say when I was five we were the same age. I inform them that they’ll be seven in two years and six next year and last year they were four, and they’re like what’s your point? I ask them if they’re married or engaged, do they own a car and they yell back NO! Parents like it because I get the kids involved.”

Proulx first became interested in being a clown when his mother got him involved with Lansdowne Children’s Centre after he lost his sight, and Jim Walsh was assigned to him as a respite worker. Walsh is now retired from that work, and is struggling with cancer. Walsh raised half a million dollars on his own for kids with cancer from the age of 40; now he’s 72. Walsh was also a Hobo clown, so when Marc started out, he began as a Hobo clown because that was all he knew.

“It really helped me deal with the whole losing my sight thing. There was no drugs, no alcohol, and really not too much depression. I mean, it obviously concerned me and it worried me, it scared me a little bit but… at first I had enough sight that I had all kinds of cool toys and when I lost my sight I ended up having to sell everything and started relying on walking and I didn’t want to use my cane. I had a white cane and it took me the longest time to accept the fact that I was going to need to use it. I did use it eventually; going to W. Ross was quite influential. I don’t know how it happened but I started using my cane, and I took great admiration in clowning obviously and I picked up on it and Jim Walsh did a lot of work for Help a Child Smile, which is for kids with cancer and families who struggle with children who are very ill. I have since done a lot of work with Help a Child Smile. I volunteer every year at different events for that, so I’ve changed my slogan, and my slogan is kind of tribute to Jim Walsh. He said the most important thing to him was to create smiles and seeing the smiles on children’s’ faces, and so my slogan that I go with is creating smiles for all occasions.”

Marco certainly has been keeping busy creating those smiles. Before Christmas he performed three to four gigs a day each weekend from Paris to Newmarket. He is booked for the CNE as well as Montana’s for March Break.

When asked what his favourite part about being a clown is, his response is simple.

“There’s only really one thing, it’s knowing those kids are really happy, and it’s the smile on that child’s face and I say that from the bottom of my heart, it’s the smiles on the kids. A lot of them, everywhere in the community, see me and I get it all the time: “Mommy that’s Marco! That’s the clown that came to my birthday!” I joke with everybody that I go around leaving a Marc in people’s lives. I always thank my Mother for giving me the name she gave me.”

When he is not performing, he’s a part of Big Brothers Big Sisters of Brantford, sits on the Dangerous Dogs committee, volunteers at the BGH visiting patients, enjoys playing cards with friends and sings Karaoke on Friday nights. Proulx shared his advice to
others who might find themselves losing their sight, be it slowly or suddenly.

“Keep a positive attitude and look at the motto of W Ross: The impossible is only the untried. I live by that every day.” The bright smile on his face certainly brought one to mine.