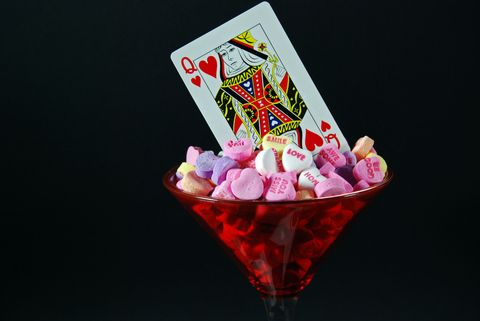 Single on Valentine’s Day? Have a Queen of Hearts Party!

Ahh, the after-Christmas blahs. Everyone is tired, deflated, sluggish, shopped-out, and the weather outside is frightful. Then along comes February, and Valentine’s Day. It’s the day of love, and romance, and poetry, and flowers and heart-shaped boxes filled with treats. Except if you are single. And what is wrong with being single anyway?

Many people are single by choice, just as many others are not single by choice. As much as it is a day for lovers, and a time when there is romance in the air. It is also a time to spend with the people you love, whoever they are.

I was single by choice. I liked it that way. So, I took Valentine’s Day as a chance to celebrate how full of love my life was, and is, by choice.

Every year instead of having Valentine’s Day, my friends and I would have a Queen of Hearts party. This was not just any old party. This was the kind of party that required much planning, and fussing about details. There were rules to be followed, and certain traditions to be maintained. You had to come to the party single. You had to wear red. You had to eat red, and you had to drink red. We played music that referred to red, was played by a band that somehow was connected to something red, had a red CD cover, or used the word red in lyrics or in any way.  The girls came up with a dance routine to Chris De Burgh’s Patricia the Stripper, complete with microphones made from toilet paper rolls and a ball of tinfoil. It was allowed, because he also did a song called Lady in Red.

We coordinated the table wear, our outfits, party favours, and the most important item, the crowns.  Before the festivities began we were busy cutting out the crowns.  Each of the guests lucky enough to be included in the Queen of Hearts party would carefully decorate their own special Queen of Hearts crown. My Aunty Ree, not a Queen of Hearts, would come over during the day and dress up the kitchen with a red table cloth, special napkins and confetti, lots of red things for our table, little treats for the mini Queen of Hearts, and cinnamon hearts for me. Her treats were always a special part of each holiday! We arrived home from school, or work, to a house all dressed up ready for a special party.

On the night of the party, when everyone else was dining at expensive restaurants that required reservations, going to movies, giving flowers and boxes of treats, we were at home preparing the house, decorating our crowns, preparing spaghetti, tomato aspic, fruit punch, pickled beets, or using food colouring on anything that was not typically red.

As our first guests arrived, we would start out the evening with each of us decorating our own crown, just the way we wanted it. There were feathers, ribbons, jewels, coloured macaroni, or just about anything you could imagine… as long as it was red. The more bling the better when it comes to a crown for the Queen of Hearts party. We would have a great feast of red foods and red drinks, along with great company and good conversation. We all had to have our special party manners, and remember to say please and thank you at just the right times. Everyone would do their part to tidy up afterwards, and all of us would go to bed that night feeling a little more connected and loved. We had the chance to share some special time with special friends, and make some great memories.

My now adult daughter refers to it as a tea party with the grown-ups. She was very sad to have our tradition end. It was me that had changed my relationship status, not her. She was very sad that on my first Valentine’s Day as a non-single person, they could not have their Queen of Hearts party. She remembers asking about the party, and being excited about getting started with the preparations, only to be told that we were not having our special party this year. I didn’t know it was going to be of such value and importance to two little people. I was doing it so that we could celebrate each one of us at a time when there was great celebration about being a couple instead of a person. I had talked to my friends about it. Most of them had changed relationship statuses at some point, and were either on or off of the Queen of Hearts list at some point. No one minded that this time it was me, except for my kids.

I didn’t find out until much later that she was so sad about not having our special party. I guess we could have a special party at any time of the year, but this one was special to her. It was our special party where we got to dress up, be girly, use our big girl manners and have a grown-up tea party. She is now an adult, and has made her own home. This year, she is having her own Queen of Hearts party with her friends. She was excited to tell me about it, and I was excited to come and help her get ready until she told me that this was HER Queen of Hearts party, and after all, there were rules, and traditions to follow. It was MY choice not to be single, and it was HER choice to be single. So, she will be doing her Queen of Hearts party with her friends, and some great food and some great drink, and some fancy crowns, and girly stuff, and big girl manners, and all that goes with a fancy grown-up tea party. I really do hope she takes pictures, and I hope some of them show magnificent crowns, and have a microphone made from a toilet paper roll and some tin foil.

One Reply to “Single by choice? You might be a Queen of Hearts. – by Sylvia Collins”