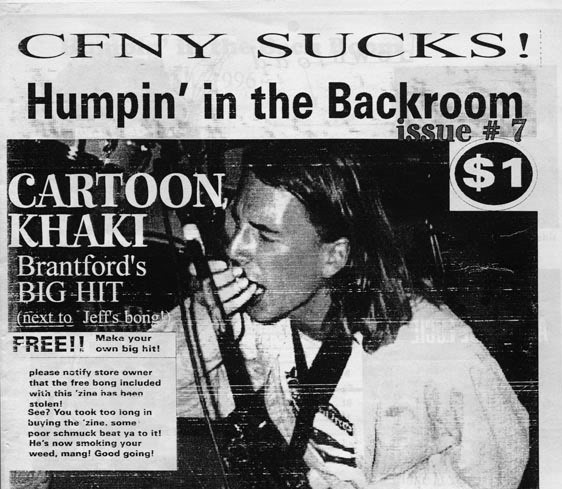 Could you see yourself talking to a store clerk for an hour at Walmart or Zehrs? Most likely not is going to be my assumption, or at least not until a store manager comes by and shuts down the conversation. No employee really ever seems to have the time to chat much before they move off to do something else that is needed to be done in the store.

As a musician, I have an affinity for where music is and am drawn to the music stores, bars and the like. Reflecting back to when I was growing up in Burford, I really can’t think of where to go to find music. Maybe my first early exposure to live music was listening to Terry Sumsion practicing or having a party, a concession over from my parents’ backyard. I clearly remember the sound of the band playing and the people cheering in the early 1980s. Jumping a decade or so into the future, I also remember one of the first trips I made into Toronto as a teen in the mid-90s, going into Sam The Record Man on Yonge Street.  I ventured up into the room that had all the vinyl in it and saw a Terry Sumsion record for sale on the wall.  I yelled to whoever I was with at the time that, this was the man I had heard so long ago a concession away in my parents backyard. Here he was in Toronto; his face glaring away on the cover of a LP looking back at me saying, “I’m from Burford and here I am in a store in Toronto.” It really made me feel like I could do that too.  I wanted to be part of something in a store or even in print.

It wasn’t until I started regularly going into downtown Brantford and shopping at a record store called Second Wave that I came to realize that some stores were not like the others. Maybe being in a band at the time was a clincher for me. Being in a band that had recorded a few tapes at the time allowed me to play a couple shows in the basement of Second Wave and be a little more familiar with the store on a personal level.  “Yes I played here! My bands tape is also there for sale!” Just like old Terry staring at me from Sam’s store wall in Toronto. It felt good to have that knowledge in the back of my mind. Regardless, I started going to Second Wave, not to buy records but to just sit and talk with whoever might have been there that I knew. Maybe even play a game of chess. As much as it was a record store that drew like-minded people into it to talk and exchange ideas… it was also the store owner Paul Evans, who was equally as charismatic with his wealth of musical knowledge, ability and willingness to share it with customers who came into the store.

On one end, you have the storeowner talking to you while other people in the store drop in, hoping to get into a conversation. There was another interesting aspect of Second Wave, one that I really found inspiring as a teen.  It is what I’m going to coin as the term “sedentary sociability.” The term “sedentary sociability” refers to the ‘zines (short for magazine) that would sit on the counter in Second Wave. The Advocate is somewhat like a ‘zine and it has that sedentary sociability of a conversation or an idea just waiting to jump off the pages to you when read. Even with a computer in the early to mid 1990s you might have been BBSing (Bulletin Board Systems) at the time, calling up boards in Brantford like Colour 84 or Snake Mountain and leaving a trail of text around for someone else to pick up on. But still the majority of people were not doing that. Back in the early 1990s, the internet really didn’t have things like blogs, Twitter and Facebook to sway your social ways.  Determined people who decided that their opinion or creativity mattered in the end-run decided to put out photocopied publications called ‘zines, most usually in small print runs of 50 copies or so. Second Wave had a few of these at the time when I was going in and out of the store buying records or being social. Titles that stick out in my mind now are Deadman Comics, Humpin’ In The Back Room, Entertainment Brantford and so on. When I saw these ‘zines sitting on the counter at Second Wave, I thought it was gold. Here are people putting out their ideas for others to see later on, all laid out and sitting on the counter to grab either for free, or for whatever other price the creator of the zine decided was right. After all these years those print ‘zines for me still hang on into the future more so then any typed out, methodically thought-up, lit-up, on/off pixel of a computer screen.

Seeing the ‘zines inspired me to make my own monthly zine that was all based on poetry, short stories and art. I called it the zine Monster and got a small group of friends to help write for it. The same approach could be said about The Advocate in relation to zines, though on a bit of a larger scale. In reading smaller more locally based print media you feel closer to your community more so then any larger national print publications.

It is that early inspiration with reading and making zines that draws me to come to this next coming thought.  I find the small business equally as inspiring as seeing a small zine.  To the right person they seem to inspire thought more then a larger chain or big-box store. The advantage that the small business has is the ability to still truly be local and “in-the-community.” There is no committee set up on how to relate to the community, it just happens. The small business committee is sitting there behind the counter or in front of it talking to you and looking you in the eye as soon as you walk through their door. It is this hands-on social approach to customers that larger chain stores can never seem to deliver to you as a customer. Maybe McDonald’s tried to do this by adding the free smile to their menu, although this has been removed from their menus now.  Maybe the thought of someone one ordering two cheeseburgers, fries and eight smiles proved too daunting. The personal approach to customer service is what I enjoy about small businesses.

Recently I’ve had the ability to be up close with people in the time that I spend helping out the Mixdown record store in downtown Brantford. At the Mixdown I still maintain that I want to chat with people about music and whatnot in Brantford and Brant since I found this so inspirational back when I would hangout at Second Wave in the 1990s. It is nice to see in the Mixdown that bands can still bring in their wears and have that look on their face that their album is in a store. It seems like a rite of passage. To come full circle, there are even zines at the Mixdown available from time-to-time for people to linger into that area of “sedentary sociability.”