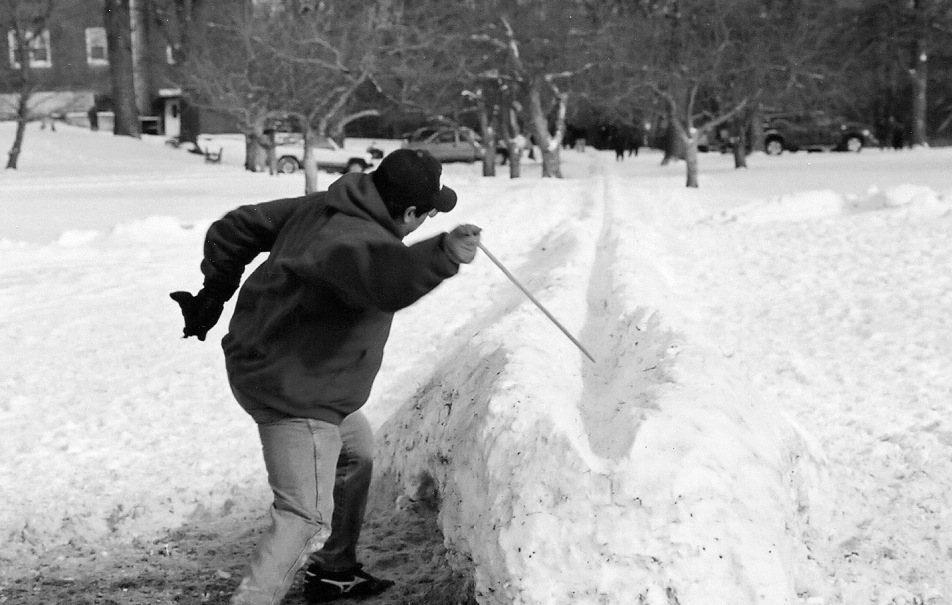 In its many variations, the game of snowsnake has been played for centuries in North America, from Atlantic Canada to California, New Mexico to the Northwest Territories. But nowhere is this winter game more at home than in the land of the Ogwehonweh (Six Nations), where snowsnake tournaments are still held and the game still revered.  Gawasa  (kaw-a-sa), or snowsnake, has long been labeled the national game of the Ogwehonweh; much to the chagrin of lacrosse fans. The 100 mph speeds, the secrecy of each teams snake shine, the chants of men urging a reluctant snake a little further down the track, and the thrill of competition juxtaposed with the camaraderie of seasoned players meeting at weekly tournaments are the key elements of a snowsnake game and the reasons for the continued love of this game.

The game of snowsnake is thought to have developed from an Ogwehonweh taboo against gathering branches from living trees to be used as firewood; only deadwood was permitted for use as kindling and fuel. Once the area close to any village was cleared of all dead branches, the wood gatherers were forced to seek their fuel from further and further away – not the most pleasant of tasks in the cold winter months. As a means to lessen the work load and introduce a sense of enjoyment to the task of collecting wood, the gatherers began hurling branches and sticks along frozen waterways and snow covered open fields, in the direction of the village; therein avoiding having to carry the bundles of wood through snowdrifts [Hubert Buck: Woodland Cultural Centre Interview, 1994]. Quite naturally, this practice evolved into a competition to discover who could throw their firewood the closest to the village. Thus the game of snowsnake was born.

As time passed, this simple game of collecting winter firewood garnered a following among all the Ogwehonweh Nations.  As such, the game was systemized with rules and regulations. Customs and specialized practices also developed as the Ogwehonweh embraced the game. The actual snowsnake became the medicine of its owner; thus, no other person was to touch another’s snake. Women were excluded from playing any version of the snowsnake game. The rationale being that the female spirit was too powerful a force and would interfere with the power of the male players and the game. As such, it is still taboo for women to play the game or even touch a personal snowsnake or the game track.

The concept of building a track for hurling the snakes was introduced as a means to keep the snowsnakes from traveling all over the playing area. At the start of the track, called the pitch, a thigh-high pile of snow was packed into place then gradually decreased in height until it was barely above ground level in a ramp-like set up. A trough was formed along the snow pile by dragging a log 3 inches in diameter down the middle of the track. This trough was to a depth of 3-4 inches. The track could be up to a mile long. Water was sometimes sprinkled in the trough to firm up the sides and provide a smooth surface for the snakes to run along. Despite all attempts it was, and is, impossible to keep tracks pristine during use so ice chunks do occur to mar the track surface. In an effort to maintain good game conditions, the ends of the snakes were burnt to harden the wood and prevent the snake from shattering when it inevitably made contact with ice chucks or snow debris. Today, the burnt end has been replaced with a lead tip.

Central to the game of snowsnake is a finely crafted and prepared snowsnake or stick. Ogwehonweh snowsnakes and snowsnake competitions are of two varieties – the long snake and the mudcat. A long snake can be between 1.8 to 2.4 meters long (6-8 feet), while a mudcat is 0.9 to 1.2 meters long (3-4 feet). Both sticks are made from hardwood trees such as hickory, ironwood, hard maple, or juneberry – the ideal hardwoods are those which are fine-grained. The tree’s trunk must be straight and at least 20 to 25cm (8-10 inches) in diameter, or longer, depending on the type of snowsnake being made.

Snowsnake playing regulations and the point system are not complicated. In its most basic form, the game of snowsnakes is played until one team garners four points. A point is earned by the team whose snake is thrown the furthest each round, with each competing team throwing four times per round. Two points are earned if the same team has the longest and second longest throws; and a game out occurs when one team earns 4 points by throwing the four longest shots in one round. Play continues round after round, until one of the competing teams has garnered the required four points. If the thrown snake flies off the established course of the track, known as jumping the track, it results in a missed throw or turn.

A snowsnake team consists of two throwers and as many shiners as desired or required by the team. Shiners are the men who specialize in analyzing track and weather conditions, and then prepare the team’s snakes accordingly.  Shiners shine the snakes with secret wax, shellac and/or oil mixtures to enhance the stick’s water repellence, as water slows down the speed of the snake, and to improve the snake’s travel over the snow.  Shiners do not share their secret blends with anyone, and go to great lengths to hide the mixtures they use on their team’s snakes. It must also be noted that teams do not share their shiners. Wax and shellac are easily removed with a knife or steel wool, and fresh coats applied as needed throughout the game.

A thrown snake can reach speeds of 100 miles per hour and travel over 1 mile in distance; this is an estimate, as the point of the game is to throw further than the other players, so distances are not measured. Spectators are warned to keep well away from the snowsnake track because these powerfully thrown snakes have been known to jump the track and penetrate boots. Snakes thrown overhand are very powerful but less accurate throws; whereas snakes thrown using the underhand method achieve greater accuracy but less power. Most players use a sidearm throw that does not compromise accuracy for power. Regardless of the throwing style, hand position on the end or tail of the snake does not really vary. The forefinger is placed in a finger grove on the tail of the snake and the remaining fingers and thumb support the shaft of the snowsnake. The thrower can then approach the track and release the snake into the trough. This approach can be accomplished in a few running steps or a dash of 20 to 30 feet. Most contemporary throwers wear cleats to aid their balance as they approach the track over snow and ice.

The Woodland Cultural Centre hosts an annual Snowsnake Tournament (weather-permitting) on a weekend in late January or through to mid-February. The timing of the tournament is dependent upon the phase of the moon and the timing of the Haudenosaunee Mid-Winter ceremony. With competitions in both long snake and mudcats, as well as a school-age tournament on the Saturday morning, spectators of all ages can enjoy the ancient Ogwehonweh game of Snowsnake. The Woodland Cultural Centre’s Snowsnake Tournament is scheduled for February  18 and 19.

Admission is free for snowsnake spectators – so plan to visit the Woodland Cultural Centre, 184 Mohawk Street, Brantford to enjoy this winter sport!