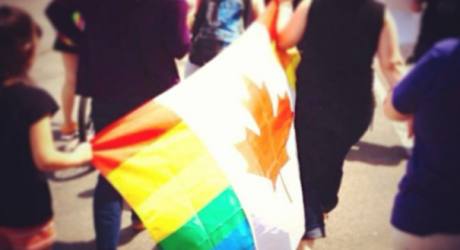 The Brant Advocate is proud to be one of many local Pride Friendly Businesses in the area.  We’ve a solid track record of being an inclusive publication and have published many articles that promote anti-oppressive philosophies and our hope is these articles will help to build bridges between the LGBTQ (lesbian, gay, bi-sexual, transgendered and queer) community, their allies and other members of the community.

Unfortunately, despite the strides that have been made in our community around such issues problems still remain.  We’ve lost advertisers for running a photo of two men kissing several months ago but frankly that is nothing compared to the fear and discomfort some members of the LGBTQ community feel in their day-to-day lives if they were to express their love publicly.

Growing up I was very homophobic.  So were many of my friends.  We made the jokes, we used the slurs, we said things like “If so and so told me they were gay I would beat them up.”  We were young, dumb and easily influenced but we changed. I still spend a significant amount of time with those old friends but now its different.  Now I sometimes see them at Pride events or I see they have replaced their Facebook profile photos with the red equal symbol in support of marriage equity.

What happened? We grew up, we met more people from diverse sexual and gender backgrounds and we realized that we were the ones with hang ups – not them. I remember that when I speak with people who are homophobic or unaccepting.  People can change.  Myself and my friends are proof.

Now it is refreshing to see how many young people from all sexual and gender backgrounds are leading the way when it comes to equality in communities like ours.  Gay-Straight Alliances are being supported by youth in high schools and while I know homophobia still exists in our education system as it does in many other places it is nice to see more balance in this regard.

In the business community locally we’ve begun to see a real shift happen too.  I still have people remark to me how cool they thought it was on the day that the City of Brantford raised the Pride Flag that they saw a large rainbow flag flying from the property that is home to Netty Vintage.  I see how busy the Pizza Hut on King George Rd is when they host fundraisers for Pride events. It is really nice to see and hear all the fun and laughter being had there on those days. The reaction when Sophia’s Bakery took the first local Pride Friendly Business sticker and proudly placed it on their window was overwhelmingly positive.

I love seeing the comments on beautiful and fun photos of gay weddings being shared on Facebook when ever Paul & Steve from Photohouse Studios are hired for those gigs. I hear great comments about the folks from Brantford Fabrics who keep rainbow material in stock and are happy to supply it.  It’s great to see large corporations like the Scotiabank on Colborne Street donate significant amounts to Brantford Pride each year. Businesses big and small in our community have been helping to stop the stigma around this issue and it has been a positive step.

Earlier this year The Bridge – which is an organizing group of local community members who are LGBTQ and allies – developed a Pride Friendly Business Program.  In the interests of full disclosure I am happy to report that I serve as a Bridge member and as one of the owners of this publication I also am a member of their business outreach subcommittee. Similar programs exist in many places including Toronto, Thunder Bay, North Carolina and Seattle.

What does it mean to be an LGBTQ friendly business?

Being an LGBTQ friendly business means that; you recognize the LGBTQ community here in Brantford as important to local business, you encourage a supportive, welcoming and inclusive environment and you are open to considering dynamic opportunities to support LGBTQ community initiatives.

What is the point?

LGBTQ people are more likely to experience physical or verbal victimization than the general population. It is important to help create an atmosphere of acceptance that encourages everyone to feel welcomed. By displaying a Pride Sticker you are helping to increase awareness of the LGBTQ community in Brantford. You are also promoting an inclusive environment where discrimination against the LGBTQ community is not tolerated. It is likely that if you are known to show solidarity and support to the LGBTQ community that they will show preference to your business.

What is the difference between and LGBTQ friendly space and a “safe space?”

“LGBTQ friendly” is in reference to your business’ commitment to creating a respectful and welcoming environment for the LGBTQ community.

“Safe space” refers to locations that have completed the Safe Spaces training program through the Grand River Community Health Centre and Sexual Assault Centre of Brant and who have put into action policies that reflect the values of having a safe space.

It is important to recognize the distinctions between these two references.

“LGBTQ friendly” refers to a support and raising awareness initiative and “safe space” is an accredited designation.

5 Tips on How to be a LGBTQ friendly business:

Being an LGBTQ friendly business is not just about a sticker. It’s about an ongoing commitment to raising awareness and supporting the LGBTQ community in Brantford. For more information or if you are interested in promoting your business as LGBTQ friendly please contact: pridefriendlybrant@gmail.com