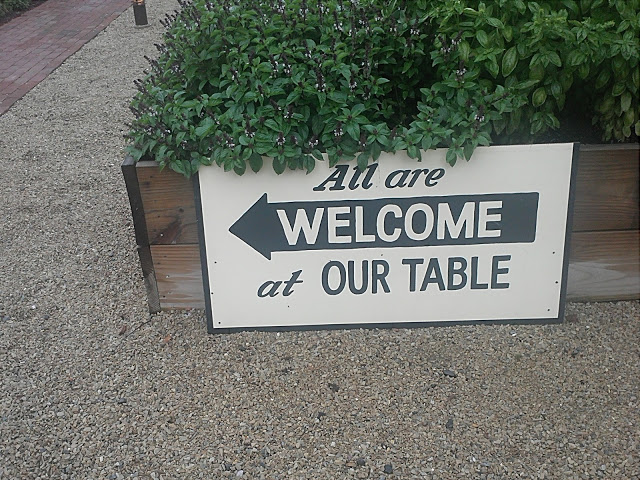 Just over a year ago, I started to read about a new trend that was coming out of the United States. Community Cafes started to pop up across the country. I instantly fell in love with the idea. What is a community cafe? It’s a place where anyone can go to get a healthy meal served in a restaurant setting, regardless of means. Most cafes are only open for one meal a day. The meals will have a suggested donation price. You can pay the suggested price, or more or less depending on your situation. If you can’t afford a meal, you can help around the restaurant for an hour and earn yourself a meal. So everybody eats, but nobody eats for free.

Knowing that the bug of this idea was making his way through me, Brian Beattie, our senior minister at Freedom House, took me on a road trip to see how one of these cafes operates. We hit the JBJ Soul Kitchen in Red Bank, New Jersey. It is, without a doubt, the most famous of the cafes out there because it was started and is in part funded by rock star Jon Bon Jovi. John has often been sighted helping out in the kitchen when he has the time. I’m sure that more than a few of the patrons who walk in the door are hoping for a chance to meet their idol. In one of the rougher parts of town, surrounded by old broken down factories and signs of decay, sits a little restaurant with an herb garden growing out in front. It looks totally out of place.

With the exception of the chefs, and the manager almost everyone else is a volunteer. I asked our server where she was from. Her answer surprised me. “Germany”, she said. I asked her if she had just arrived and she answered, “Yes”. Having come with little to no money with her, she asked a local agency where she could get an inexpensive meal. They directed her to the Soul Kitchen and she volunteered to earn her meal there. Ryan, the manager, sat down to talk with us about the vision and what he’s seen. When you look around the room, you can’t really tell the difference between who is “in need” and who isn’t. That’s exactly what they’re shooting for. It’s an attempt to create a place where lines of income level are erased and we’re all just people.

The real purpose of the cafe is to act as a hub for needs. As patrons frequent the place again and again, Ryan gets to know them and find out their stories. He recently helped a middle aged man get back on his feet. After living a very normal life with a wife and kids and a job, everything went wrong. Shortly after a nasty divorce, this poor fellow found himself out of a job. Within months, he had literally lost everything and was living in a shelter. The Soul Kitchen works with more community based groups than you can imagine. This is completely intentional. Not only can other groups point those who need the Kitchen in the right direction, but they in turn can do the same. Ryan had connections with a number of local employers. He made a few phone calls, and got this man a job and got him back in the game.

Everybody has a story. The restaurant is the place to draw that story out. It’s a place for people in transition. I asked if they had problems with “street people” showing up. His answer was no. The reason? The meal wasn’t free and almost all of those who were asked to work for their meal refused. Draw your own conclusions on that one. This is about a hand up, not a hand out. It’s a place for people who are trying. The kitchen offers courses in food handling and prep work so locals who are uneducated can find jobs with over a dozen local restaurants they work hand in hand with. A local grocery store has given the Soul Kitchen a line of credit for $100 000 annually to buy the food and supplies they need to make the meals. The location was built with volunteers and free labor from a local contractor.

Sit down and eat and get to know us. What do you need? If you have an addiction issue, we can help direct you to the right people. Do you need clothes or a place to stay? Do you need training for a new job? The list is endless. This place is really a community need bank and I’m absolutely enthralled with the way it works. Many people who need nothing and have lots of money come to eat here. They are what keep the place alive and operating. You wouldn’t think they would come, but they do. They love the idea and support what is being done here…not to mention that the food is great. They come to pay it forward to someone who really needs it. I could go on about this concept for days. I’ll write about it again I’m sure. It is my vision to see something similar happen right here in Brantford.