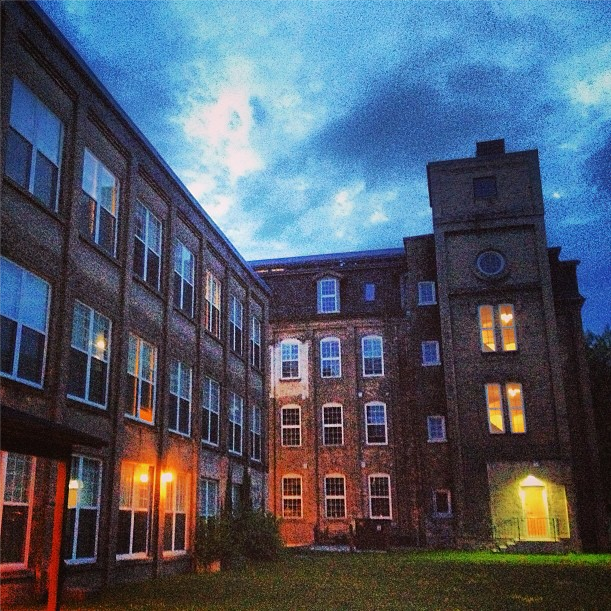 Life changes frequently these days. We are caught in a constant whirl of rapidly developing new technologies decked out with the latest bells-and-whistles, jamming the store shelves as consumer goods. While I don’t want to sound like yesterday’s man, wistfully longing for the good old days, I do still miss the textile industry that used to thrive in Brantford, Paris and Cambridge. None of these were more enduring than Penmans, upon which the town of Paris was essentially built.

My first factory job in the 1970s, during a semester off from high school, was in an old Penmans building used by a company known as “The Pride of Paris” to import and resell fancy fabrics from all over the world for custom made draperies, upholstery and a myriad of other uses. Beautiful woven textiles from France, Russia and North America were stored in large bolts of fabric in large bins in the warehouses. It was my job to collect them for orders, deliver them to the cutters, and wrap the finished pieces for shipping all over Canada. We worked hard, but my trainer, Glen, who I remember for his large collection of native arrow heads, also liked to have a little fun. Our trips to the west warehouse were frequently delayed by an impromptu hockey game in the vacant aisles using a roll of tape and a couple of broom handles where the best goals were not goals at all; rather, they were the shots we managed to bing off each other’s heads. It was a fun learning experience but the completion of my high school diploma mandated a return to school for my final winter semester.

A couple of years later, in the thick of the textile industry after landing a job as a knitting machine operator in the old Penmans building on Willow St. in Paris, I soon became what was known as a “fixer”: a knitting mechanic who did setups, repaired damaged machines with broken needles, and fixed press-offs; this happened when a yarn broke and the fabric released from the drum in a tangled mess. I learnt how to repair the electric eyes that scanned the fabric on the high speed knitting machines from Japan and Germany, which would later lead me to gaining a college diploma in electronics. The newer knitting machinery in the 1980s were amazing pieces of technology, considering that these machines could make almost a million stitches in five seconds.

Among the variety of knitted fabrics we made were jersey (for T-shirts), rib (for collars and cuffs), lacosse (typically for golf shirts), and fleece (for pullovers and hoodies). Before my time, the nearby Paris dam housed a lock that powered the knitting machines via water power, as well as a massive complex system of pulleys and leather drive belts that ran across the high ceilings of the now demolished Willow St. plant. It has been told that on occasion an unfortunate worker would get caught in one of those drive belts and be severely injured after being carried 20 feet up to the ceiling. The remnants of the old lock from the days before electricity are still in place on the east side of the dam at the canoe portage. In the 1960s all of the 100+ year old knitting machines were converted to use electric motors and continued to be used into the late 1980s. You certainly don’t get 120 years of work out of modern machinery.

We had a sewing department on the third floor in the Willow St. Penmans building, and another in the Grand River Ave. factory in Brantford, which later was sold to Solaray. The old Canadian Tire building on Mechanic St. in Paris was another Penmans building, as was the previously mentioned Pride of Paris building (now housing apartments) on West River St. The Penmarvian retirement home on Grand River St. North in Paris was, a very long time ago, the family home of John Penman, the talented entrepreneur who created the Penman’s empire.

In the early 1980s, I still remember Martha, our union president, bringing around a petition that virtually everyone (management included) signed asking the federal government not to drop the protective tariffs that prevented Canada from being flooded with low cost clothing imports. Textiles is a very labour intensive industry; it takes a lot of hands-on work to make a garment. When the tariffs were dropped Canadian labour simply could not compete with low-wage countries or Dominion Textile; our corporate owners soon shipped a large number of our spare machines to India. It was the beginning of the end, and within ten years most of the North American textile industry was wiped out.

My tone may sound resentful which is truly unintended. In truth, many people have found themselves dressed in more affordable clothing with money to spare for the other necessities of life. Still, I have used the handle “knittingmechanic” as part of my email address for more than 20 years now and will likely do so for the rest of my life, remembering an industry filled with amazing machines staffed by warm and friendly people.