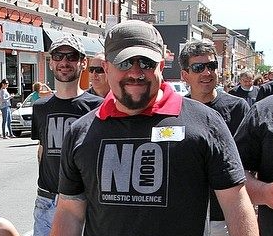 I’d never given much thought to what my last story for the Brant Advocate would sound like… or what it would be like to write it. I’m finding it difficult to shoe horn three years into one article. Let’s start with the official sounding stuff. After three years of successful publication in Brantford, Brant County & Six Nations this will be the final print edition of The Brant Advocate.

Over the last few weeks Marc, Deirdre and I have been quietly telling people in the community that the paper is coming to a conclusion. Ironically enough, the most encouraging and reassuring part of that process has been the response we’ve received. In almost every case I’ve been met with a mixture of disappointment and disbelief, “Why? Why are you closing?” It was P.T. Barnum who once said, “Always leave them wanting more.” I like that. You’d hate for one of the biggest and most important projects you’ve ever been a part of to outlast it’s usefulness or overstay its welcome. It’s a nice feeling to know that we’re closing this chapter on a high note and going out with our boots on.

From my side of the aisle, I’ve been at the helm of three startups for the last five years. The Brant Advocate / Advocate Television, Octopus Red (Graphic Arts, Website Development, Marketing, Advertising, Public Relations) and Sophia’s Bakery & Café. I’ve been working an impossible schedule and while all three businesses are doing very well, the demands that come with the growth of all three has put us in a position that there is only time to take two of them to the next level… while maintaining some semblance of work-life balance 🙂

“Why did you start a paper?”

The question I’ve been asked most since we started. When we began this journey I wrote a few paragraphs for our first edition. I’m proud to say that after three years the needle never moved.

“I was born and raised in Brantford. I went to public school, high school and college here. I started my career, met my wife, started a family, launched my design firm, created Sophia’s Bakery, and now The Brant Advocate (and later Advocate Television) in Brantford. This city has given me everything. Now it’s my turn to give back.

While promoting the first Tweetstock I told anyone who would listen that “it’s time to introduce Brantford to the world”. I was half right. What I needed to say was that it’s time to introduce Brantford to Brantford. It occurred to me that each and every person I met in this community had a really great story to tell and what better way to turn strangers into friends than by sharing a little bit about one another. Through this sharing and telling of stories we’re discovering we have far more in common with one another than we thought.

There is no question that as a community we have taken some pretty tough shots to the body and in a lot of ways our backs still aren’t straight, and we don’t stand as tall as we should. It’s time that each of us begin to re-write the narrative of what it means to be from this community. No more cynicism. No more apathy. This is our town and this is our time.”

Since committing those words to print I’ve had the pleasure of meeting so many wonderful and interesting people and learned so much about my community. I became friends with the man who rings the bells at Grace Anglican Church. I crawled beneath the sewing table at Woodland Cultural Centre where I read the names and the messages left by children who endured the residential school system. I felt crippling sorrow and helplessness when I learned of the childhood sexual trauma of a City Councillor. For three years I witnessed the full spectrum of humanity as told by the people of this community. Let that sink in for a second… complete strangers trusting you with something that’s often times very personal or painful. Trusting us, people they’ve never met, to deliver those words with dignity and respect. It is an indescribable honour to shepherd the words of the people. Almost 800 pieces of original content published in three years. A one-of-a-kind snapshot in the life of this community and a truly unique and deeply remarkable experience.

“What are you most proud of?”

One of the things I’m most proud of about the Brant Advocate was our lock-step adherence to the “Golden Rule.” No hatchet pieces. If you’re upset about something don’t give me a thousand words of poison and anger. Give me a thousand word solution to a problem. Don’t attack people. Attack issues. Under no circumstances would we print something that would hurt another. The Brant Advocate was a safe place for people to share their thoughts without fear of ridicule.

Looking back to those early days it’s pretty amazing to think that none of us had any idea what we were doing. Publishing, design, editing, distribution, ad sales… not a clue. For me, that’s what made this entire endeavour so compelling. This was uncharted territory and we were facing an uphill battle… creating a newsprint publication in an era where the future of newsprint was always in question… and doing so in front of the entire community. We had no choice, it had to work. Even if it meant delivering thousands of papers each month from the trunks of our cars late at night and in all manner of weather.

Publishing, designing and selling the ads for the Brant Advocate has been without a doubt the biggest and most challenging project I’ve ever undertaken in my career. Being wholly responsible for the look-and-feel of an entire newsprint publication while wearing a sales hat each month to ensure we had the necessary funds to print and distribute was daunting to say the least. I’m proud to say that we had three uninterrupted years of publication and we have remained debt-free from our first month of printing.

“What will you miss the most?”

Advocating. I love providing a voice for people or places that either don’t have a voice or could use a boost. In fact, I’d like to take this final opportunity and share with you something in this community that means a great deal to me: Woodland Cultural Centre.

I’ve had the pleasure of working with, and getting to know, the people who work at Woodland Cultural Centre over the last several years. They are a remarkably diverse and fascinating group of hard working and dedicated people. I’ve had the privilege of participating in numerous guided walk-throughs of both the museum and the residential school.

No other region in Canada has a facility with such enormous sums of living indigenous history and culture, and it’s right here in our own backyard. I encourage each of you to visit the museum, make a donation and take the tour. Most importantly, I encourage you to listen. Really listen and absorb what Woodland is and why it’s so vital to the fabric of this region.

The volume of people that require thanking for The Brant Advocate is immense and too numerous to name. However, there are three very special people I must thank. My wife and my daughters.

To my beautiful, amazing, talented and patient wife Laura. From the beginning you have been both a rock and a wonderful source of inspiration. You were there when I was out of ideas and you helped me to find new ones. You got to live all of the chaos that happens behind the curtain of a big project. The early mornings, the late nights, the driving all over at all hours in horrible weather to deliver a free paper for no money. For three years you stood by me and you never wavered. For three years you were there when I wasn’t able to be. You are the most extraordinary person I’ve ever met. I’m blessed and honoured to be on this path with you.

To my two beautiful girls Nadja and Sophia. Before I say thank you I must first say I’m sorry. I’m sorry for how much time I had to sacrifice to this project. I’m sorry for all the times I wasn’t able to do something fun because of a print deadline. I feel like I blinked and you guys were three years older. When you look back on this time I want you to remember that we did this because we believe in our community and we believe we can make a difference. More than anything I hope this has taught you both that there are truly no limits. Dream big impossible dreams, chase them down and don’t let anyone ever tell you there’s something you can’t do. I am incredibly proud of both of you and I love you more than you will ever know.

Finally, to the people of this community. I hope that in some small way The Brant Advocate has helped you, has done something to enrich your day, has made you think about the people around you, has made you feel more connected with this place we call home. It has been an honour to serve the people of Brantford. Thank you for reading. (You can still catch us on Rogers TV for Advocate Television. Season 2 starts this Fall. Check local listings for details.)