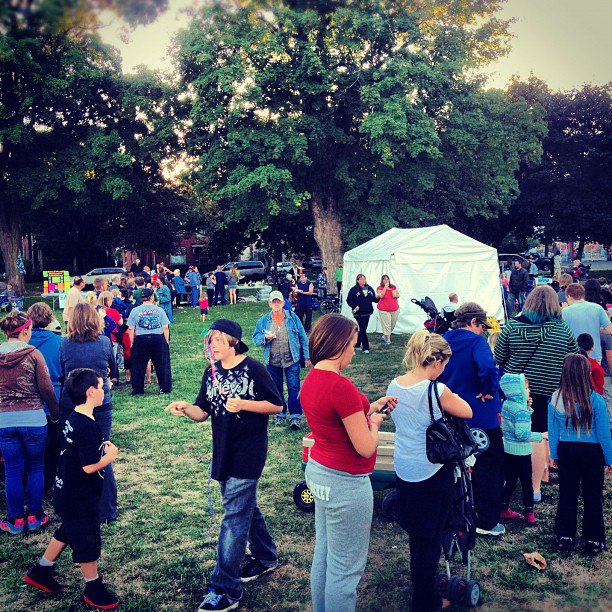 15 years ago I moved to Brantford. My father lived in Eagle Place with his girlfriend and so this was really the only section of Brantford I had ever visited. I got an apartment in Slovak Village, the newly renovated one that had been blown up by a previous tenant and thought it was a steal at around $700 a month. I was from Cambridge and paid quite a bit more for a place in Galt. My daughter Nadja was born some several months later at Brantford General Hospital and the streets of Eagle Place became my walking tour of Brantford with my new baby. We went for ice cream or to the store at Happy Cow. Went to visit dad who was off work having cancer treatments, he lived on Gordon St. And then went for walks down Greenwich St. to the Woodland Cultural Centre grounds and to the chapel and back to Slovak. This was my route.

When I moved away from Eagle Place and my dad died, I had no real reason to go back and I didn’t. For a long time. I met Lucas and we got an apartment downtown and eventually bought our house in the north end. Lucas had a job at Ball Media and I worked in Hamilton and so the north end is where we stayed, visiting family downtown occasionally but we never crossed the boundary into Eagle Place. Until 3 years ago. We met some really amazing people in this city, hard working, community driven, and they are all Eagle Place proud. Some from being raised there like Marc Laferriere, some from living there now like Dave Carroll and some for working there like Lisa Lumax. Lisa’s may not be a name that some of you will recognize right away like my friends Dave and Marc but Lisa is a hero in my story.

On Saturday August 18th my purse was stolen. Within half an hour of calling it in to the Brantford Police officer Jamie Savage was at my door. He took all the details of the incident and promised to look for my purse right away. I didnt expect what happened next. He came back with a few other officers and a bag of my stuff. I was overjoyed that some of my items had been found, the birth certificates for myself and my children, SIN Card, banks cards. I thought that was it and would have been grateful for having just recovered these items but when we went to sign everything out we discovered that the officers had found some stuff but so had a stranger I didn’t know, a good Samaritan in Eagle Place. And while we were talking to the duty officer we discovered a second good Samaritan had found my keys and some of my medicine while running on the trails in you guessed it, Eagle Place. Well Luke and I took a good hike down behind Earl Haig and found my actual purse and some receipts, loose candy and a jar of honey I had in my purse all underneath an overpass. We thought that was the end of it. Still missing my cell phone, drivers licence and health card we were grateful for the items that were recovered and went home. The next day we made a list of where to call to get my ID replaced and thought we would start calling on Tuesday, but Monday night when we got home there was my ID. It had been found by none other than Lisa Lumax from Brant Community Church in…drum roll please… Eagle Place. Along with my ID was a picture of the google map directions to my house that Lisa had printed off with a note. She could have done several things that day. She could have just left it where it was and did nothing, she could have called it in to police, she could have dropped it in a Canada Post mail box but she didn’t, she drove to the absolute opposite end  of town and dropped it in my mail box. A personal, wonderful, gesture of community. Thank you Lisa. Now about the purse. Am I mad it was stolen? Initially I was. But seeing that everything important to me was returned and the only thing missing is my phone and money, I’m not mad any more. I’m renewed in my belief that there are those in need of our help in this community. Greater still I’m renewed in my faith that there are those people in this city that would put aside themselves to help others. People like Lisa Lumax, Officer Savage and the other officers on our case as well as the unknown good Samaritans of Eagle Place

3 Replies to “Thank you to the People of Eagle Place (Laura Duguid, @SophiasBakery)”