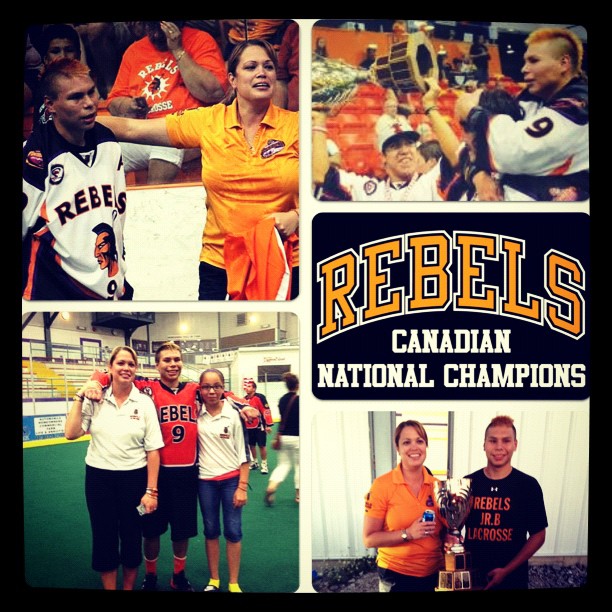 As I watch the clock count down the seconds, my heart is in my throat and my eyes begin to tear… the buzzer sounds… we did it! The Six Nations Junior B Rebels Lacrosse team are the back to back Founders Cup – Canadian Junior B National Champions. The win is bittersweet even though we won in front of our hometown as we were the hosts of the 2012 Founders Cup tournament. It’s the first time in the Rebels franchise history that we have hosted this elite tournament. It was our chance to truly show all of Canada what Lacrosse is about.

My association with the Rebels lacrosse team began in the summer of 2011 when my family was in the midst of a sad time due to a family tragedy. We had been gathering as a family to support one another through the difficult times. As a result, I began to attend lacrosse games that my cousin, Ian played in. He was a member of the Rebels lacrosse team. I was never a huge fan of watching lacrosse, but it was something I could do with my family and to support my family.

I remember going on the lacrosse floor after we had won the semi-final round of the Ontario Lacrosse Assoication playoffs. I gave Ian a hug and told him how proud I was of him and his efforts. He asked me then, “Jenny (his pet name for me) if we make it to Founders, are you gonna come and watch me?” Without hesitating, I said yes. The annual Founders Cup tournament that year was in Saskatoon. He was shocked that I would do that for him, but family is family and we support one another. The Rebels ended up winning and making it to the tournament, and I ended up in Saskatoon for the Gold Medal game. Ian scored a goal and when he did, he pointed at me. I knew in my heart then, that I had made the right decision.

As we celebrated the win, there were a lot of tears. Another bittersweet win, my family’s past tragedy was now another family’s current tragedy. A former Rebels player and coach, Keegan Hill, had recently passed away and the loss affected our players and fans. There were plenty of happy tears and plenty of sad tears that day, but we did it. We overcame the adversity and won.

At the year-end Annual Rebels Lacrosse General Meeting, which was also the annual awards banquet, I was nominated as Treasurer for the team. I asked Ian if he was going to continue playing for the Rebels. He said yes, so I accepted the nomination. I did it for my family. I told Ian that I would continue to help the team as long as he played for them. I soon learned what a huge task it would be – we were the hosts for the annual Founders Cup tournament in August 2012! I was thrust into a situation where we had to not only raise enough money to run a Junior B lacrosse team for a season but to also host a National level tournament!

As lacrosse is the Creators game, one that was given to my people as a form of medicine, I and my fellow Rebels executives were determined to make this the most memorable and unbeatable Founders Cup in history. Thanks to the support and hard work of the executives and vast army of volunteers, we did just that. The Road to the Founders Cup was a long hard road, but we made it.

Along the way, my new found Rebels family suffered a major and tragic loss. In the final round of the Ontario playoffs, we lost a player who was the heart and soul of our team, Carney Johnson. He was just 19-years-old when he tragically passed away, very suddenly and unexpectedly. Our team was in the midst of playoffs and gearing up to host, and ultimately win the Founders Cup, when the tragic event took place. The grief and sadness that surrounded and consumed our team (players, coaches and executives) was great. I can only imagine how difficult it was for Carney’s immediate family. We pulled together as a team, supported one another and turned to local Faithkeepers to help our boys work through the grief. The sadness and grief is still there today, but the boys held it together and moved forward and every win from that day on, was a win for our fallen brother: #28 Carney Elijah Johnson.

…the buzzer sounds and the Rebels win, 8-7 over the Akwesasne Indians. The Rebels are a history making team; the second time in franchise history that they have been back-to-back Founders Cup Champions and the first team in Founders Cup history to have won the title five times. It was also the first time in Junior B Lacrosse history that it was an All-Native Final in the playoffs, and in the Founders Cup, which saw the Rebels victorious over the Akwesasne Indians both times.

Again I am on the floor searching for #9 Ian Martin. As we find each other and I hug him close and tell him how proud I am of him, the tears begin to fall, bittersweet again. It was then that I realized what the team has given me and the other members of the team… it has given us family and pride.

The Creator gave us this game as a medicine and it’s because of this medicine that we have been able to overcome our grief and carry ourselves strong, tall and proud to continue to play for him. We never forget where we came from, or what we’ve been through and we let it guide us to the future…Rebels Proud, Rebels Strong, Rebels Nation.

In loving memory of Keegan Hill #8 and Carney Johnson #28. Once a Rebel, Always a Rebel, even those Rebels with wings.